It’s dark, cold, and snowy outside. It’s not a helluva lot better in my heart.

The news of Rush drummer Neil Peart’s passing hit me a lot harder than I ever could have imagined. I was blindsided. Like so many other fans, it never occurred to me to consider the possibility.

I got the word not four minutes after Rolling Stone‘s website broke the news. I just knew it was a hoax. But like them or loathe them, RS never pulls that kind of thing as a gag. As more and more news sources released the word, I knew I had to accept it.

I was out running errands when I heard. I held it together until I got home. The tributes started pouring in, and the tears started pouring down. It got even worse when I looked at Neil’s face in the articles, and then on video. Watching 60,000 Brazilians joyously sing the melody to “YYZ” was the last straw.

I cried. I pulled all of my Rush CDs off the shelf to start playing them in order, from Fly By Night to Clockwork Angels. I cried. I listened to the music. I cried. I wrote a tribute piece — exactly 1,004 words — in just over 30 minutes. I cried. I guess the therapy is working. 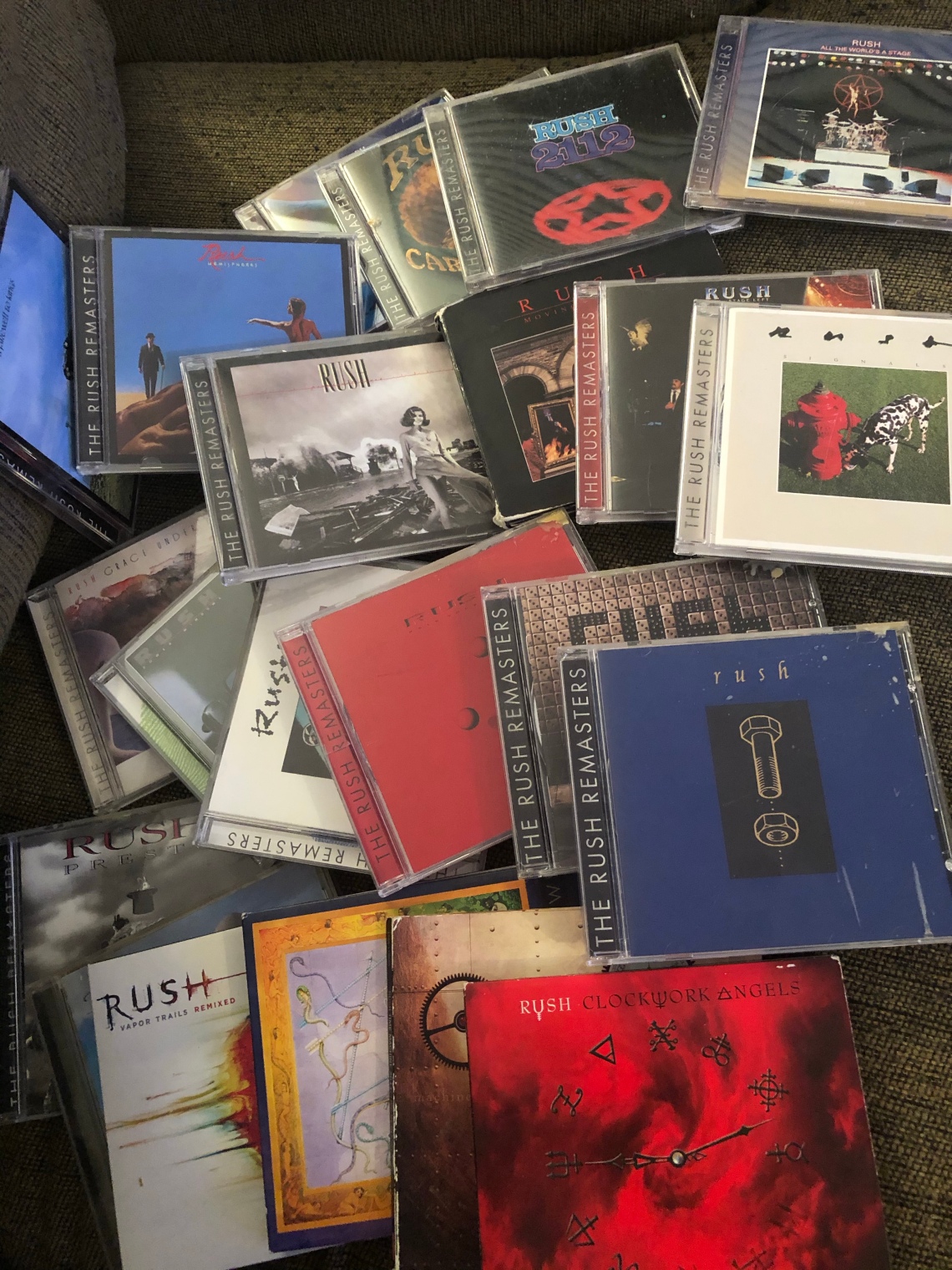 Like everyone else, I will get through my grief. I’ll move forward. I just need to linger a little bit longer.

Side note: My readership seems to have taken a serious uptick. All it took was for someone I deeply admire to die. Bad trade, as far as I’m concerned.

This little gem followed me home from Planet Score yesterday. On any other day, I’d be all over it. But that will have to wait one more day. I’m sure Frank would understand. After all, I did the same thing for him.

January 9 marked the 25th anniversary of my entry into the police academy. We were commissioned on May 3. I rather enjoy symmetry. So I have decided that May 9 will be my last day in uniform.

When he broke up R.E.M., Michael Stipe supposedly said, “The most important thing about going to a party is knowing when to leave.” I’m there. My party is over. It’s time to head for the exit.

I made my decision public via my Facebook page. The final stick in the ribs. No turning back now. And no real reason to do so. The next chapter awaits. I can’t get there without ending this one first. The excitement grows.

(Oh … if you’re looking for me in that photo, look to the right side of the banister. Second row from the top, first one on the left.) 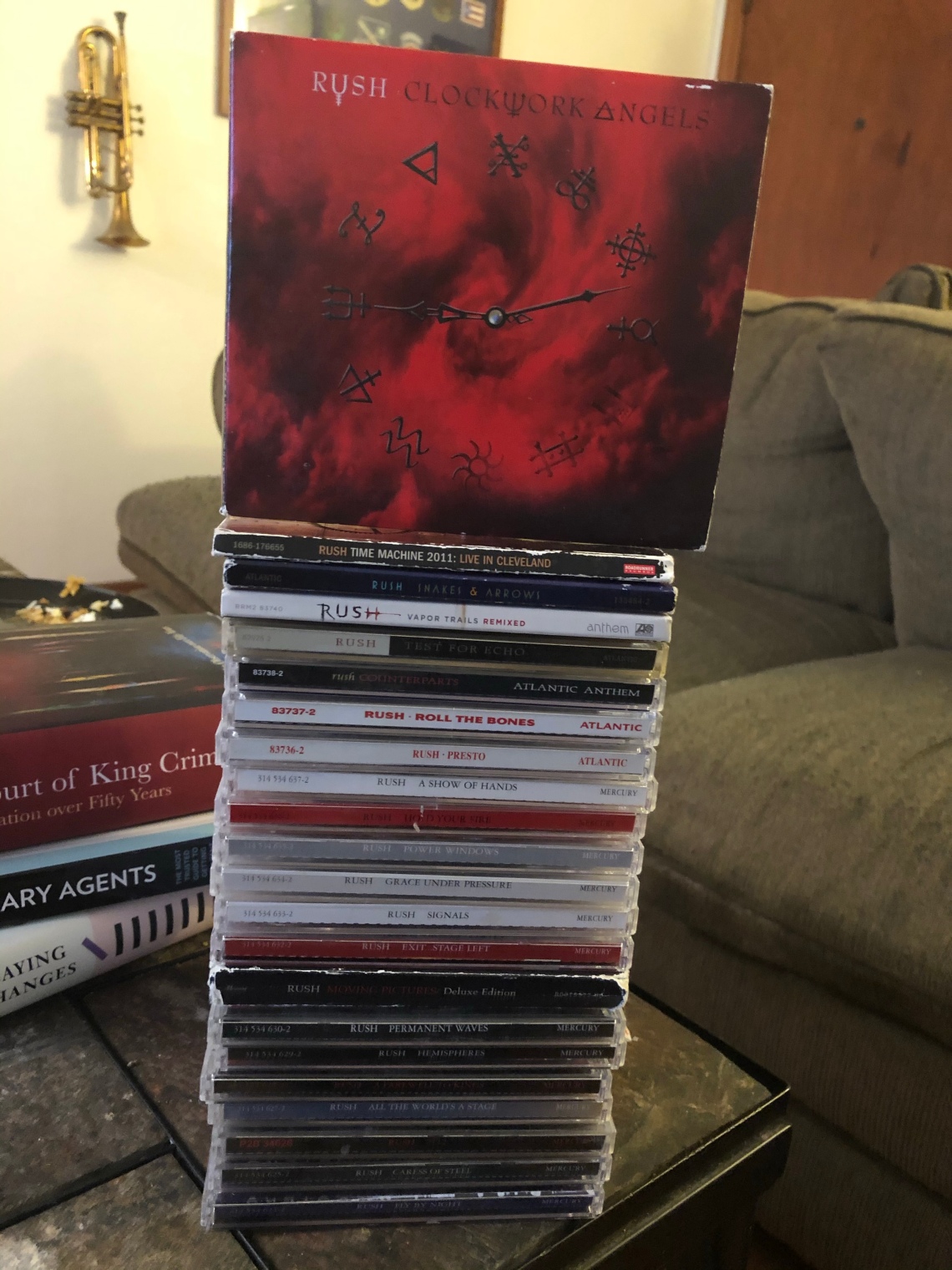 I’ve mourned. I’ve binged. I’ve purged. And now I can celebrate the life and music of Neil Peart without a meltdown. The sting remains, but I feel better.

I did play “Headlong Flight” from the Clockwork Angels album three times, the last being less than five minutes ago. The power behind that song … the virtuosity … and the the album was released nearly 40 years after their first one. It’s mind-blowing.

Once the tune ended, I was able to return the CDs to their shelf. And now I can move on. 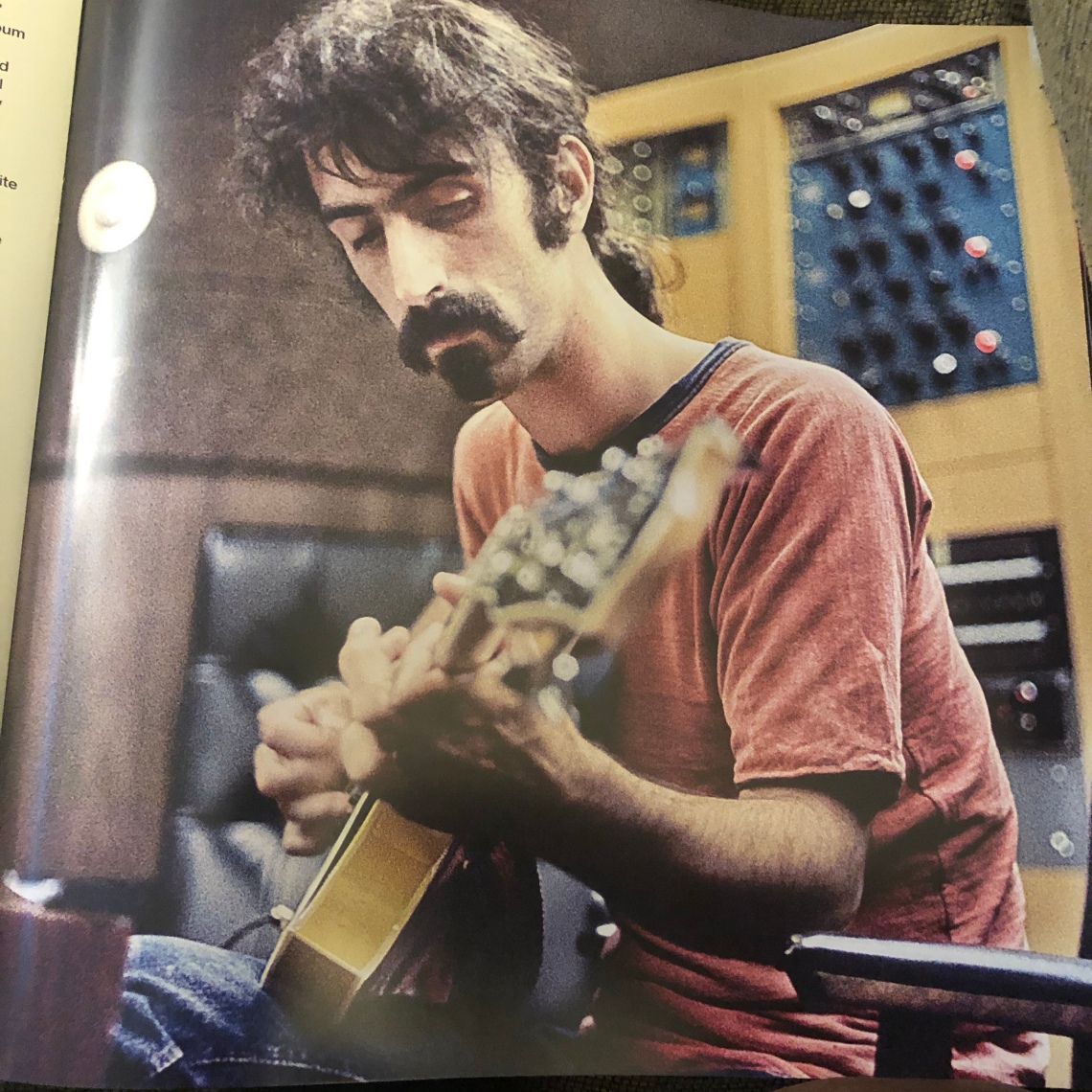 The college football championship game is quite competitive. But I’m barely watching it. My focus is locked into Frank Zappa’s Hot Rats Sessions. It is truly a feast for the ears.

I’m only in the second of the six discs, and I plan to stop for the evening after this one. It’s 140 minutes worth of music so far, and there so much to digest. I need time to think on it all.

I’m reminded of Freedom Jazz Dance, the Miles Davis bootleg that documents the making of Miles Smiles. It’s one thing to appreciate the finished product. It’s something else to enjoy the process in “real time,” as the album comes together, step by step. This is where these box sets can really pay great dividends for completists like me.

Speaking of Zappa, it’s good to have his Guitar CD back in the fold. I don’t know why I waited so long to get it back. Or why I downloaded it and let I go in the first place! The same can be said for King Crimson’s Heavy ConstruKction. My collection feels a little more complete every day.

It’s Friday! For us, anyway. A four-day weekend awaits. Lest anyone get too excited, a seven-day work stretch is our reward upon returning.

The Neil Peart thing is fading, which is to say I’m listening to other things and not lingering too much on the loss. I am reading some of the tributes coming forth, which have been both heartfelt and touching. The exception being Carl Palmer’s, who’s stock definitely plummeted in my eyes.

What I haven’t fully felt like doing is writing. I’m hoping to shake that feeling loose in the next day or so. I have so much to do, and the stack is not getting any smaller.

This is to say nothing about getting serious about creating and checking things off on my Pre-Retirement checklist. Picking a day definitely makes it real, so I’d best start getting some stuff done.

It’s been a day of mixed blessings.

I took a small tumble at work today. A bad step on the edge of a sidewalk let to a slightly twisted ankle (no real biggie) and me falling straight down on my left knee (which in the last few hours has proven to be a bit of a problem). I thought I got away with just a little embarrassment and a scrape. But now there is moderate swelling and more-than-moderate pain. Time to break out the ice and ibuprofen.

On the plus side, my mind is being absolutely blown by The Hot Rats Sessions. I thought I couldn’t admire or appreciate Frank Zappa any more. Well, I was wrong.

It’s cold outside. Temperatures are headed toward the teens. I want to complain, but all I can hear is that little voice in my head chuckling and saying, “You want to live in Chicago. Get used to it!”

And so, my trap is shut on the matter.

The new year’s writing projects are slowly kicking into gear. I have drafts galore to populate and edit. And there are still other requests to send and prep for.

The reviews are piling up, as well. That’s not a complaint. It’s nice to feel like I’m in demand. Here’s hoping that path continues forward.

The morning after my little tumble, I woke up I’m pretty serious pain. I was convinced I had sprained my left knee. Eleven years of pretty hardcore tennis — and the physical issues that come with it — left me pretty familiar with the feelings that come with muscle pulls, strains, sprains, and tears. I was quite certain I had entered sprain territory. Luckily, I felt quite a bit better the next day. A little aching remains, along with the feeling of a stretched ligament. So I’ll call it a strain instead, and life goes on.

I also managed to cause a moderate flap on my Facebook page around some remarks made by Carl Palmer, when he was asked about Neil Peart. To me, his comments were both I’ll-timed and less than magnanimous. I can understand someone not revering a musician the way his fans do. But Palmer’s approach seemed a little beyond the pale. Those not familiar are welcome to take in both Palmer’s statements and my personal take. There’s no real need to re-run it all here.

I completed the Zappa Hot Rats box set and wrote my review. My only real disappointment was that the discs came to an end. But you can read more about that later.

For now, I dig back in, and let Frank’s guitar playing keep me company as I go.

I’ve gotten quite a bit accomplished. But now my mind is jello. 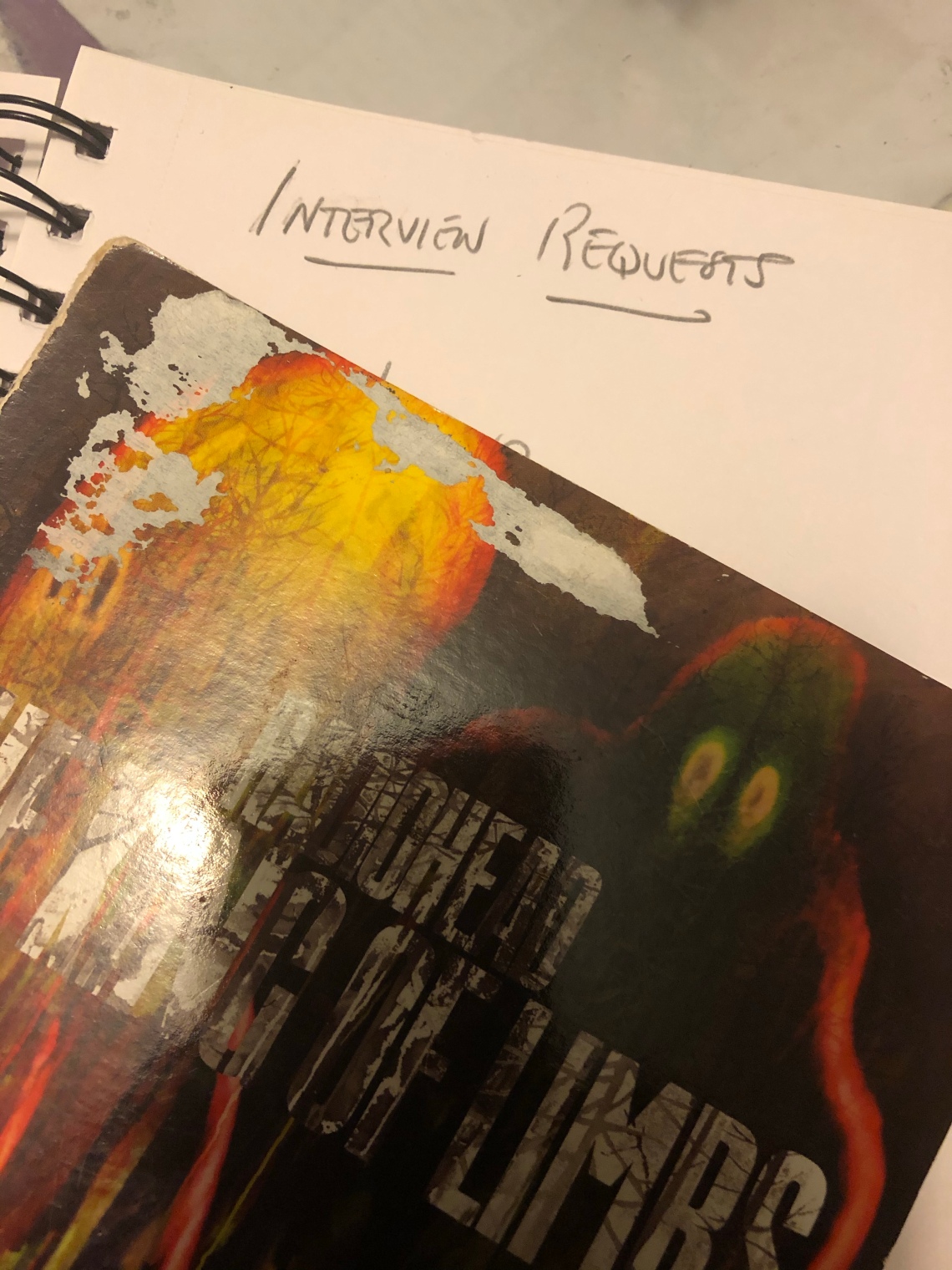 But I’ll worry about all that tomorrow.