A Few Words About “The Hot Rats Sessions”

The more cynical among us may see deluxe box sets of long-ago released albums as little more than a cash grab, or an opportunity to make a few bucks off tracks the artist did not deem worthy of release in the first place. This is an understandable position. Box sets are not designed for the casual fan.

Sometimes, however, a box set beautifully answers the question “How did they do that” when it comes to the creation of an artist’s greatest albums. Frank Zappa’s The Hot Rats Sessions does just that. Over the course of six CDs, listeners are given the opportunity to experience the construction of one of Zappa’s greatest works from the ground up.

Originally released in 1969, Hot Rats is one of Zappa’s earliest recordings without his band, the Mothers of Invention. The six “rock ‘n roll concertos,” as Zappa called them, were brought to life by the leader, his primary co-collaborator Ian Underwood, and several top-flight studio musicians. The album was recorded on a prototype 16-track two-inch tape machine, which afforded Zappa a host of sonic possibilities.

This set is an invitation to sit alongside the maestro as he brings his newest musical vision to life. We are in the control room at T.T.G. Studios in Hollywood for every stumble, false start, and sudden direction change that leads to the ultimate master take of each song.

We get to listen to Zappa direct his musicians, telling them what’s working and what isn’t until everything comes together. Then we’re treated to the overdub sessions, where solos and other additional parts are added, since they couldn’t be completed in real time.

This is not just a collection of random outtakes annotated and tossed aside. This is creativity in action. Not every box set offers this experience. The only other set that jumps out for me is Miles Davis’ Freedom Jazz Dance, which listens in on his quintet as they create the legendary album Miles Smiles. 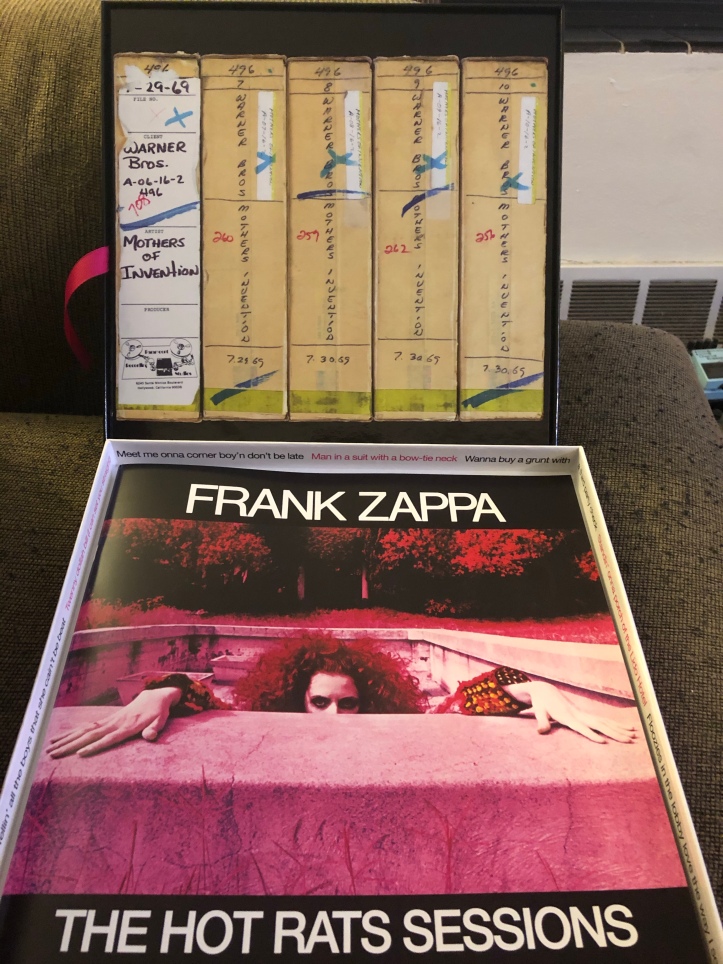 Regardless of how familiar they are with Hot Rats, listeners will essentially be hearing each song for the very first time once they understand what it took to complete them. Like Freedom Jazz Dance, I found myself responding to Frank as he gave direction, acknowledging my understanding of his musical needs. All I wanted to do was bring forth the sound he was hearing inside his head.

Of particular interest are the lengthy jams performed live in the studio, which were pared down for inclusion in the proper album. My personal favorite is “Big Legs,” a nearly 33-minute jam cut in half to become “The Gumbo Variations” on the album. When I listen, I can’t even fathom how difficult it must have been to trim this song down. It was that good.

Not everything recorded during these sessions made the album. Material that hit the cutting room floor wound up on albums like Burnt Weeny Sandwich, Weasels Ripped My Flesh, Studio Tan, and The Lost Episodes. Nothing, it would seem, ever went to waste. Looked at another way, Hot Rats could easily have been a double album!

The box contains a book featuring an interesting essay by Matt Groening (creator of The Simpsons) and previously unreleased photos by Bill Gubbins and Andee Nathanson.

Also included is a board game(?) I can all but assure you I will never play. It’s a charming idea, but I’m much more interested in hearing Zappa establish his identity as a guitar legend, as well as being one of the great composers of the 20th century.

Normally, I would say a box set like this is designed solely for Zappa completists. But the truth is, anyone serious about creating music — real music — should find a way to listen to this collection. A masters degree worth of information awaits within. All the student has to do is listen.