Bassist Julie Slick has become a mainstay in Belew’s bands. In the first Power Trio, Slick was joined by her younger brother Eric on drums. The younger Slick has since moved on to Dr. Dog, where he continues to make a major impact. Slick was briefly replaced by progressive rock stalwart Marco Minnemann (The Aristocrats, Steven Wilson). I was eager to see this dynamic young drummer at work in person. But it wasn’t meant to be. Minnemann, too, moved on to other pastures. When the Three of a Perfect Trio tour hit town in 2011, Belew brought with him a drummer named Tobias Ralph.

I didn’t know Ralph from a hole in the wall, but it didn’t take long to realize he belonged behind that kit with this band. Belew may have a penchant for pop-oriented material, but those songs are laden with complexities, and require a drummer with massive amounts of dexterity. This applied even more to the King Crimson material being played as part of The Crimson ProjeKct, a sextet featuring Belew’s trio and the Stick Men (Tony Levin on Chapman Stick, Markus Reuter on U8 touch guitar, and Pat Mastelotto on drums). The song “Indiscipline,” one of the highlights of the set, features a six-minute drum “battle” between Mastelotto and Ralph. Smiles were abound from both audience and remaining band members while those two duked it out.

Ralph brings with him a musical sensibility built on the principles of progressive rock and jazz. Born and raised in New York City, he has been playing the drums since the age of four, and played his first professional gig behind R&B legend Chaka Khan at the age of 12. His talents took him through the La Guardia High School of Music and Performing Arts and the Berklee College of Music. In addition to Belew, Ralph has also played with Screaming Headless Torsos, Lauryn Hill, 24-7 Spyz, and former Living Colour bassist Muzz Skillings, among others.

While he can certainly hold a basic 4/4, he plays complex polyrhythms and alternate time signatures as though he has four arms. My many attempts to photograph the man at work led to little more than a determined face of concentration, and a complete and utter blur where his hands and sticks were supposed to be. On a personal level, Ralph is one of the kindest and most personable musicians I have ever met. He shocked me the last time I saw him in person, greeting me with a warm embrace and the memory of both my name and what we talked about the first time we met. Moments like that are to be cherished forever.

In the meantime, Ralph can be found teaching full-time at the Collective School of Music, gigging with various groups, and giving tutorials online via his social media pages.

Tobias Ralph was kind enough to answer Seven Questions from CirdecSongs while at home in New York.

CirdecSongs: Who are your influences, and how do they affect your playing?

Tobias Ralph: My main influences would be Billy Cobham and my dad. Billy was and is so amazing! He always put every ounce of energy into his performances, and played with such intensity all the time. Plus he wrote such challenging, incredible music! My dad instilled in me to never give up, and that if you want something, you have to practice hard and regularly. Just never give up!

When did you know you’d made the right move to become a musician?

I made the decision to become a musician when I won the first Buddy Rich Memorial Scholorship in high school. I made a video and it was judged by Steve Gadd,  Dave Weckl, Vinnie Colaiuta, Louis Bellson and Don Famularo. It was such a pivotal moment! I knew there was nothing else I could do!

Tell me about an “I love my job” moment.

I think when I got into the Crimson ProjeKCt, and we were playing Frame By Frame. I looked at Adrian and Tony and there I was playing Bill Bruford’s parts with them! I totally lost it! That was definitely a ‘I love my job!’ moment.

Where do you want to take your instrument from here?

I just want to continue to figure out ways to make people dance and solo at the same time! To continue to put the energy out in a positive way, so that people will respond right back to it in an equally positive way.

What is the most difficult aspect of your profession?

Having people take you seriously! Dealing with the judgements of ‘oh your playing is not flavor of the month’ because you don’t play like some guy who is the next big thing! And of course getting paid- a) on time b) and whether it’s enough or not!

What else should people know about Tobias Ralph?

That I’m an avid runner. I run six days a week, anywhere from three to 18 miles. I try to go early in the morning before I teach, like around 6 a.m. Sometimes I go late at night after a gig. It’s so peaceful! I’ve done four triathlons, and I’m training for my first marathon. A personal highlight was making it through a 20-mile run in 90-degree heat!

You’re behind your kit. Your dream band is in front of you. Who’s there?

My dream band would be Devin Townsend, Chick Corea, Chaka Khan, Tosin Albasi  and Evan Marien. All opposite ends of the musical spectrum! 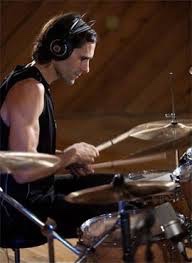