I’ve seen Adrian Belew in person more than a few times. He’s always been engaging, friendly, and nice to be around. I chose my musical hero well.

Being a Belew fan is like being in a somewhat exclusive club. When Adrian comes to town as a solo artist, with the Bears, or in any other context, the club gets together at the venue and revel when the guest of honor shows up. It gets to the point where Adrian recognizes certain fans when he comes to their city. He’s been known to miss them when he doesn’t see them at the gig.

I like to think I’m one of those fans.

Every time Adrian has come to St. Louis since 1996, I’ve been there (with one exception). He was gracious enough to give me some of his precious time while I was researching my book. He appears prominently in those pages for a reason. Still, with all that personal contact and the times I’ve stood right in front of him during gigs, I have no real idea whether or not my presence has ever registered in his mind. His last appearance in St. Louis provided me with a few answers.

Adrian brought his Power Trio to town last March. They played at The Old Rock House, which is becoming his go-to venue. It’s a great room, perfectly suited for this band. I’ve seen Adrian perform there twice with his trio, and once with The Crimson ProjeKct. Each gig was memorable for its own reasons. Last March was no exception.

It all started the day before the show, when I got a message from Andre Cholmondeley, Adrian’s road manager. Andre and I have exchanged online comments about various things over the past couple of years. He’s a really good dude. Still, I was surprised to hear from him. He asked if I was coming to the show, and wanted to know if I needed tickets. The day tickets went on sale for the show, I bought one. So I was covered. Nevertheless, I thanked Andre for looking out for me.

The day of the show, I was one of the first people at the venue (as usual). When the doors opened, I made my way in and positioned myself right in front of the stage, less than three feet from Adrian’s microphone stand, which was already set up with the rest of the gear. I stood next to a couple of young fans I’d never met. They were taking in their first Adrian Belew show! I was so excited for them! As we waited, I thought it might be a good idea to find Andre, and thank him again for his consideration. My new friends held my spot, and I went looking for him.

I found him in less than two minutes, standing behind the front-of-house mixer. We exchanged a little “dap,” and I went about thanking him for reaching out. He was his usual kind and affable self. We talked about a future book idea I had, and how Andre could play a serious role. He was on board, and I was happy.

Suddenly, Andre abruptly changed the subject. “You know Tobias, right?” he asked. It seemed like a weird question, but I went with it. Andre was talking about Tobias Ralph, Adrian’s drummer. “Of course I know Tobias,” I said. “The man is amazing! It’s like he has four arms when he plays! He’s so incredibly talented! Why do you ask?” The question hadn’t completely left my lips when I felt a presence to my right. I turned and found myself face to face with Tobias Ralph! Well, more like face to neck. He’s a bit taller than me.

Needless to say, I was a bit taken aback. Tobias, on the other hand, had it all together. “Hey, man,” he said with a warm smile. “It’s great to see you again!” Before I could say anything, I was bro-hugging Tobias Ralph! I remembered having a brief chat with Tobias the last time the band was in town. But I found it hard to believe he would remember that. Then again, there aren’t a lot of middle-aged African-American men at Adrian Belew shows. I guess I stuck out. What the hell. I went with it! We exchanged pleasantries for a bit, and then he was off to warm up for the show. How cool was that moment?

I made my way back to my spot, and told my two new friends what had just happened. They were appropriately impressed. But things just got curiouser from there.

When the band took the stage, I found myself about eight feet away from bassist Julie Slick, who was slightly to my left. Julie was also kind enough to talk to me for an hour or so the last time the Trio was in town, and she too is featured in my book. In addition to being a supremely talented musician, Julie is also an incredibly nice person. We’ve exchanged DM’s from time to time, usually to talk about Radiohead, Animals as Leaders, or some other band we both enjoy.

Julie and I made eye contact almost immediately. I offered her a silly, exaggerated bow. She smiled and retuned the gesture. My new friends saw this, and were somewhat amazed. But it got better. Julie was still breaking in a new five-string Lakland bass guitar she called Denise. After one tune (I can’t remember which one) that Julie absolutely knocked out of the park, I looked in her direction and offered a quick “I’m not worthy” bow. She looked at me, grinned sheepishly, and pointed to her instrument, mouthing what looked like, “I don’t know, man. It’s this bass! This thing is incredible!” 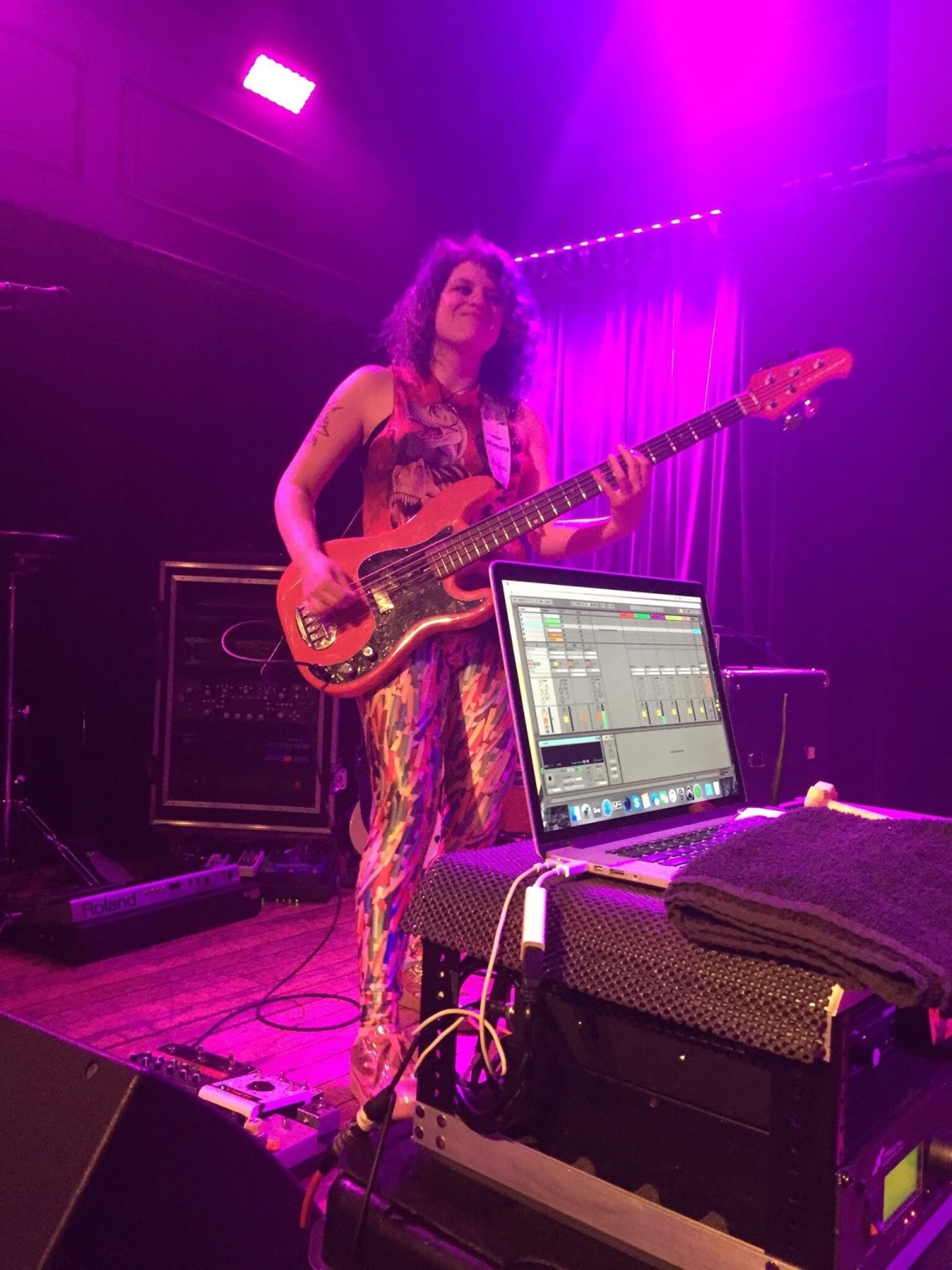 A little later, Julie was able to sit and take a quick breather while Adrian blazed away. As usual, we were all amazed by what we were hearing. I took a quick peek to my left, to see if Julie was as mesmerized as we were. She was. I had been photographing Adrian, so my camera swung left with me. I looked at Julie with a face that asked, “How does he DO that?” This was her response, which spoke volumes: 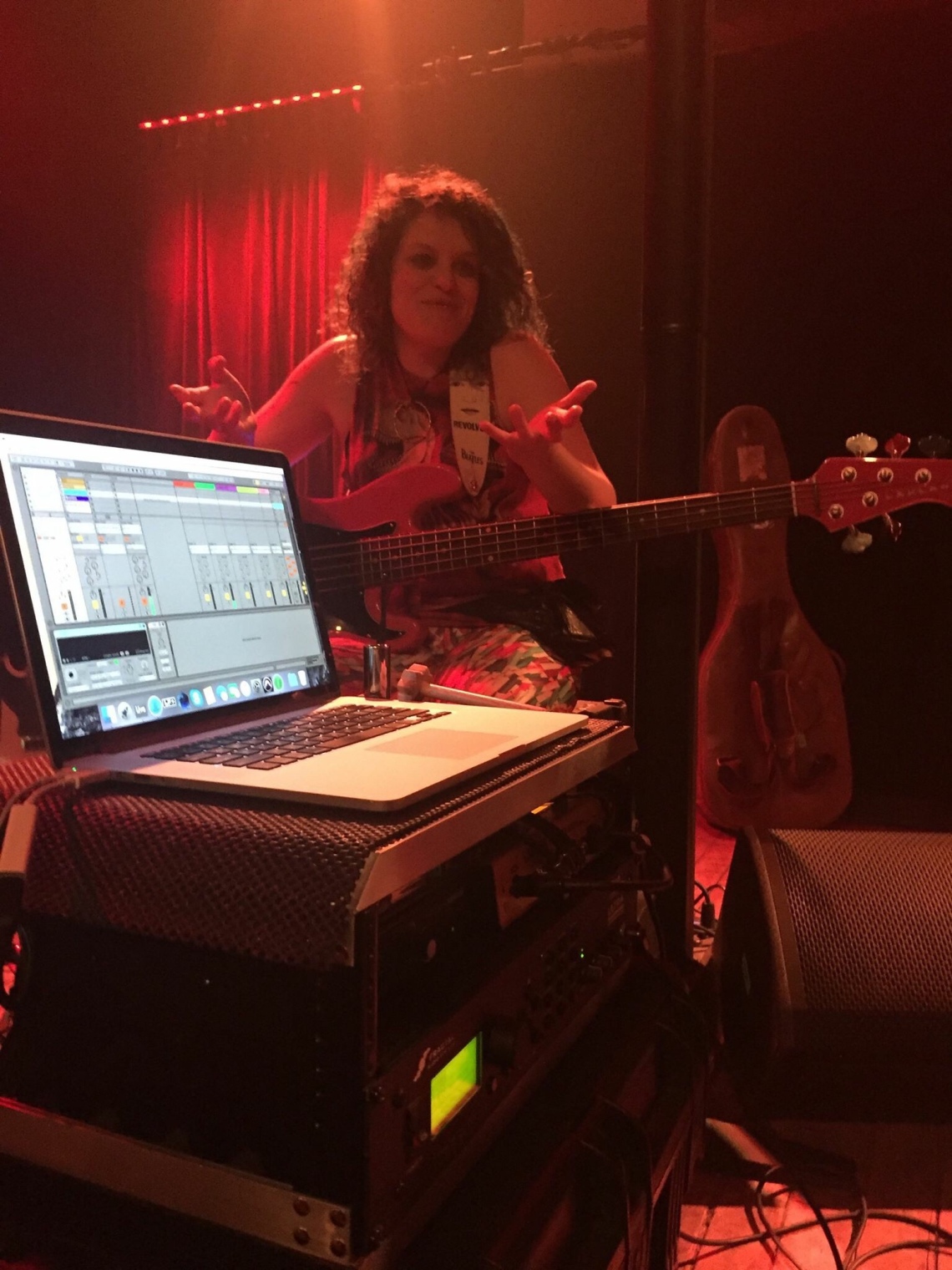 Like i said, Adrian was literally right in front of me during this show. When his guitar cables became briefly tangled, it would have been nothing for me to reach out and fix the problem. I was that close. But that seemed like going too far. He was so close, in fact, I actually had to lean back to take this shot. 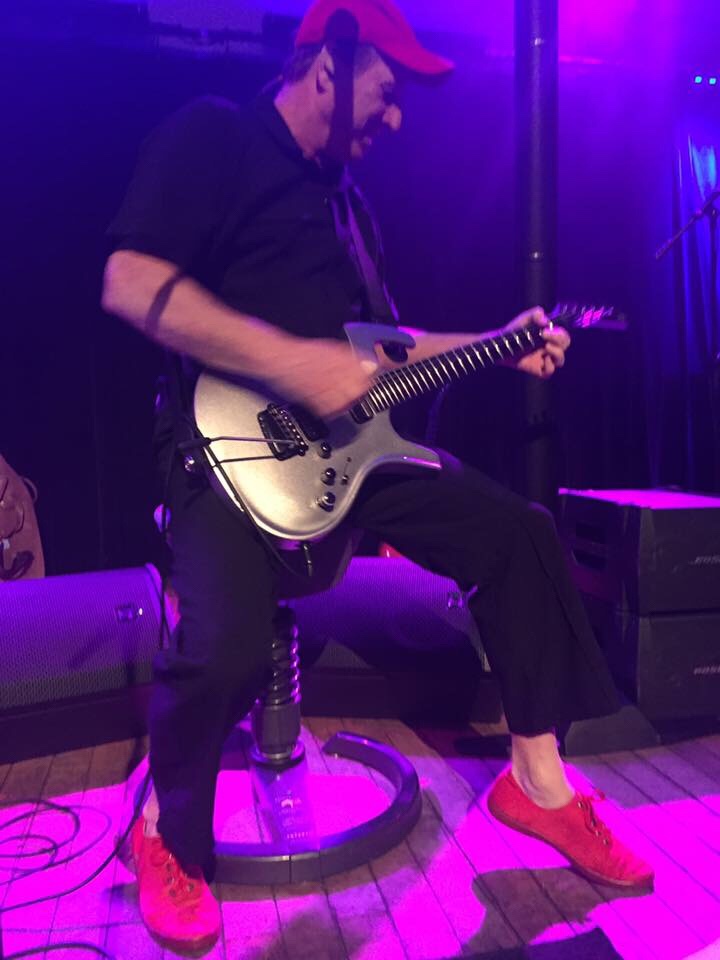 At another point Tobias took off on a solo, nearly burning the place down as he did so. I got a couple of quick shots of him playing, but my angle wasn’t that great. As I brought my camera left, I found Ade staring right at me. His gesture said about Tobias’s drumming what the rest of us were thinking. 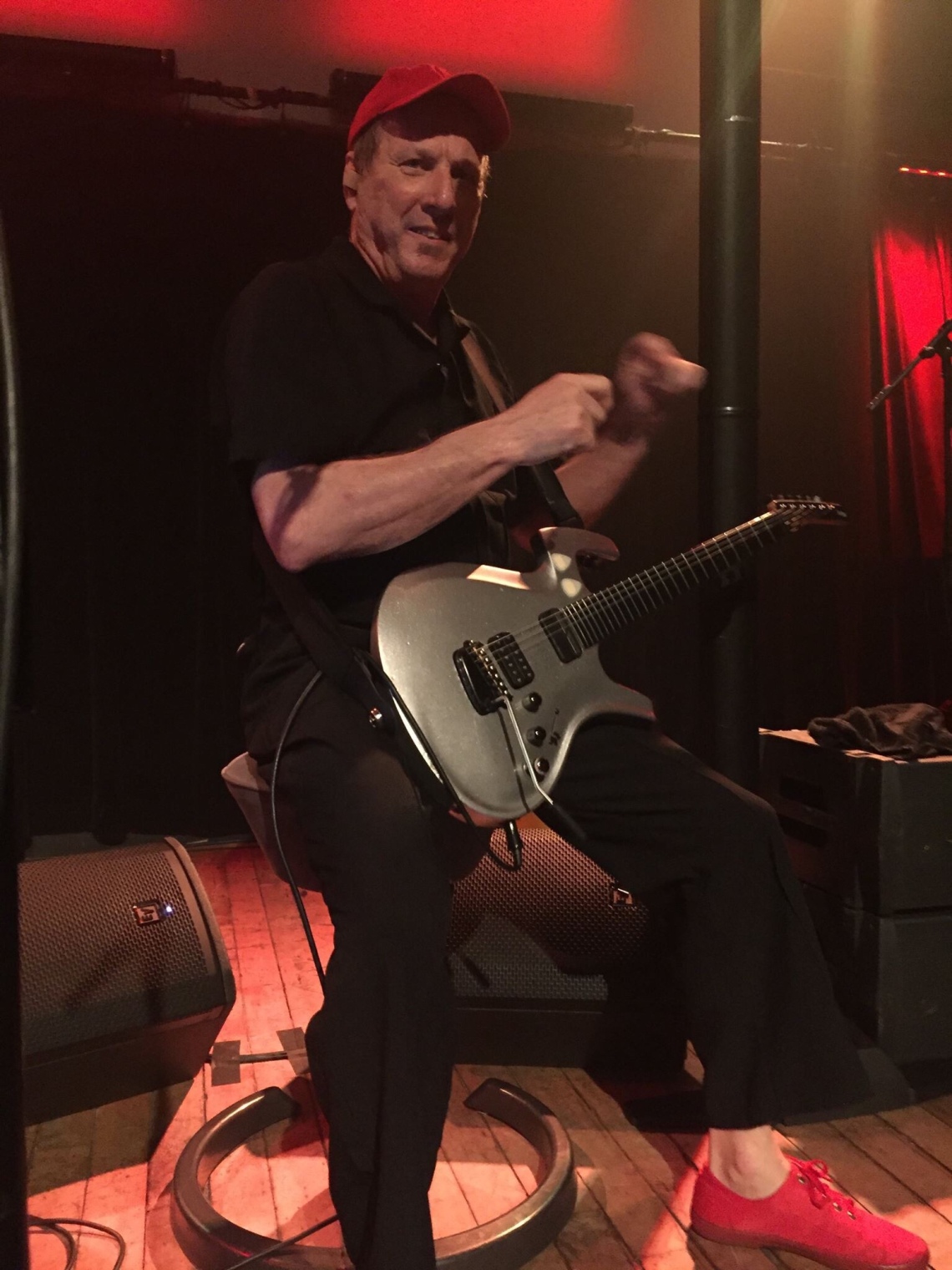 And still things got odder.

It was a glorious set. Far and away, one of the best I’d seen. When it was over, I made my way to the merchandise table. Ade mentioned that his wife was doing the selling, so when I got there, I said, “Hi, Martha!” because I knew her name. A curious look came across Martha’s face, making me just a little paranoid. Then she pointed at me and said, “You’re Cedric, right?”

I was flabbergasted. “Yes,” I said. “How in the world do you know that?” She just smiled and brushed it aside like it was completely common knowledge. “Oh, Adrian has talked about you,” she said. “He really enjoys your writing!” And then she complimented me on the suit I was wearing. I told her I wore it because I thought she might be there, which she found funny. Wow, I thought. Adrian’s wife knows who I am. How crazy is that?

As has become my habit, I situated myself at the back of the line for the band’s post-show meet and greet. I had a special request involving a pickguard I’d brought with me, and I didn’t want to be rushed, or hold anyone else up. I made my way through the line, and found myself talking with Tobias and Julie again as I waited to talk to Ade. It felt like talking to family (perhaps a niece and a brother-in-law) while waiting for Dad to become available, and it was a lot of fun.

When Adrian did become available, he greeted me warmly, complimenting me on my suit. “You’re looking good, Ced!” he exclaimed. “I didn’t think you’d need a suit for my show!” I told him what I told Martha, which he also found funny. We took a minute to talk about the book, and then he signed my pickguard the way he had years before, which is another story altogether.

I’d had my picture taken with the band before, so I very nearly didn’t bother asking this time. But something nagged at me to go ahead and ask, anyway. I’m glad I did. As always, the band was more than gracious and accommodating. When that was done and I started to walk away, Julie stopped me to tell me about some of her future plans. How nice of her to confide in me that way! At the end, we exchanged a friendly hug, and I was on my way. As always, I left The Old Rock House happy. But this was a different kind of happy.

For a few hours, I felt like I was part of the Belew family. Yes, it’s a band. But it doesn’t take much to see that this group is much more than that. They’ve posted some of their PG-rated road antics on social media, and they are every bit as goofy as you might imagine. I’ve never really wanted to hang out with a band on the road, outside of my own. I like having that wall of mystery between myself and my favorite musicians. That being said, I felt like I was half a step from being asked out to the band’s post-show dinner. And I would have accepted that invitation! But I’m perfectly okay with that never happening.

It’s always nice when a musician treats you like you’re special. This particular evening felt like a step beyond that. I certainly have no reason to believe it will ever happen again. That’s fine. Because this was an evening I’ll never forget.