I’ve been obsessed with the music of Boston’s Bent Knee for three or so years. Having been smitten by their records, I’ve been eager to see them take their genre-defying to the stage with me in the audience.

Thanks to a couple of near-misses, I’ve been waiting more than two years for such an event. My wait finally ended on July 8 at Fubar, a charming, grungy little dive club just west of downtown St. Louis.

Even then, I had to wait. There were four other bands playing before Bent Knee took the stage. Ish, Distant Eyes, Family Medicine and Gatherers each offered up 25-35 minutes of punk/death metal stylings that — while interesting — couldn’t have less to do with Bent Knee’s sound, to my ears. Listening to the vocalists in these bands roar into their microphones created a real sense of musical schizophrenia compared to the singing voice of Courtney Swain, which is where my head was, and what I was looking forward to.

That being said, Bent Knee took immediate ownership of the stage, playing with the energy and intensity of their predecessors. The band was touring behind their latest — and first major commercial — release, Land Animal. The enthusiasm of Swain (who also played keyboards), Ben Levin (guitar and vocals), Jessica Kion (bass and vocals), Chris Baum (violin and vocals), and Vince Welch (guitar and sound design) could not be denied. They grabbed the audience gleefully by the throat and refused to let go. None of us were complaining. 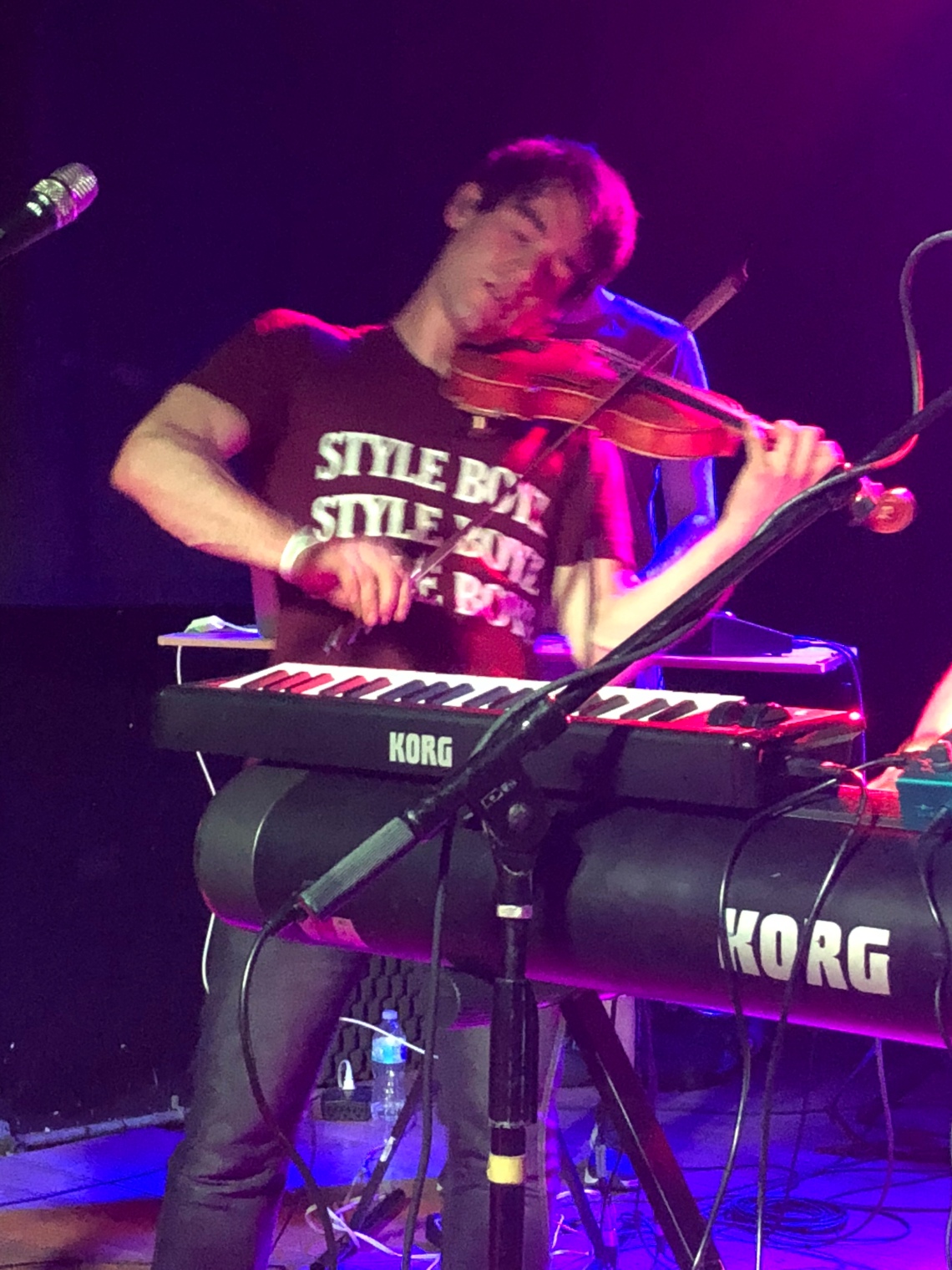 A special tip of the cap goes to Adam Cichocki, who plays drums for Gatherers and sat in for Bent Knee’s Gavin Wallace-Ailsworth. Gavin took a bad step in San Francisco, causing him to break his leg. He’s back in Boston, recuperating after surgery. Gavin and I, along with Thomas Hatton, did a fun podcast for Proglodytes a few months back. I was really looking forward to meeting him in person, but it will have to wait until next time. Always with the waiting. Meanwhile, Cichocki did a more than capable job as a pinch-hitter.

As I said, Bent Knee’s music marvelously thumbs its nose at description and genre. People are eager to throw them into the progressive rock realm, but that’s not quite the right fit, despite apparent influences. My favorite description is “avant-pop,” which feels a bit more all-encompassing. Not that it matters. Bent Knee’s music can simply be labeled “kick ass.” That more than describes what I was hearing.

Highlights of the set included “Terror Bird,” “Garbage Shark,” and “Leak Water.” My only real complaint was that the hour or so they played wasn’t nearly enough! This band deserves a solid 90 minutes, minimum. That way, they could have gotten to a couple of personal favorites, like “Being Human,” “Battle Creek,” and “Way Too Long,” all of which come from Shiny-Eyed Babies, the album that hooked me. But as that great philosopher Mick Jagger once said, “You can’t always get what you want.” Maybe next time. 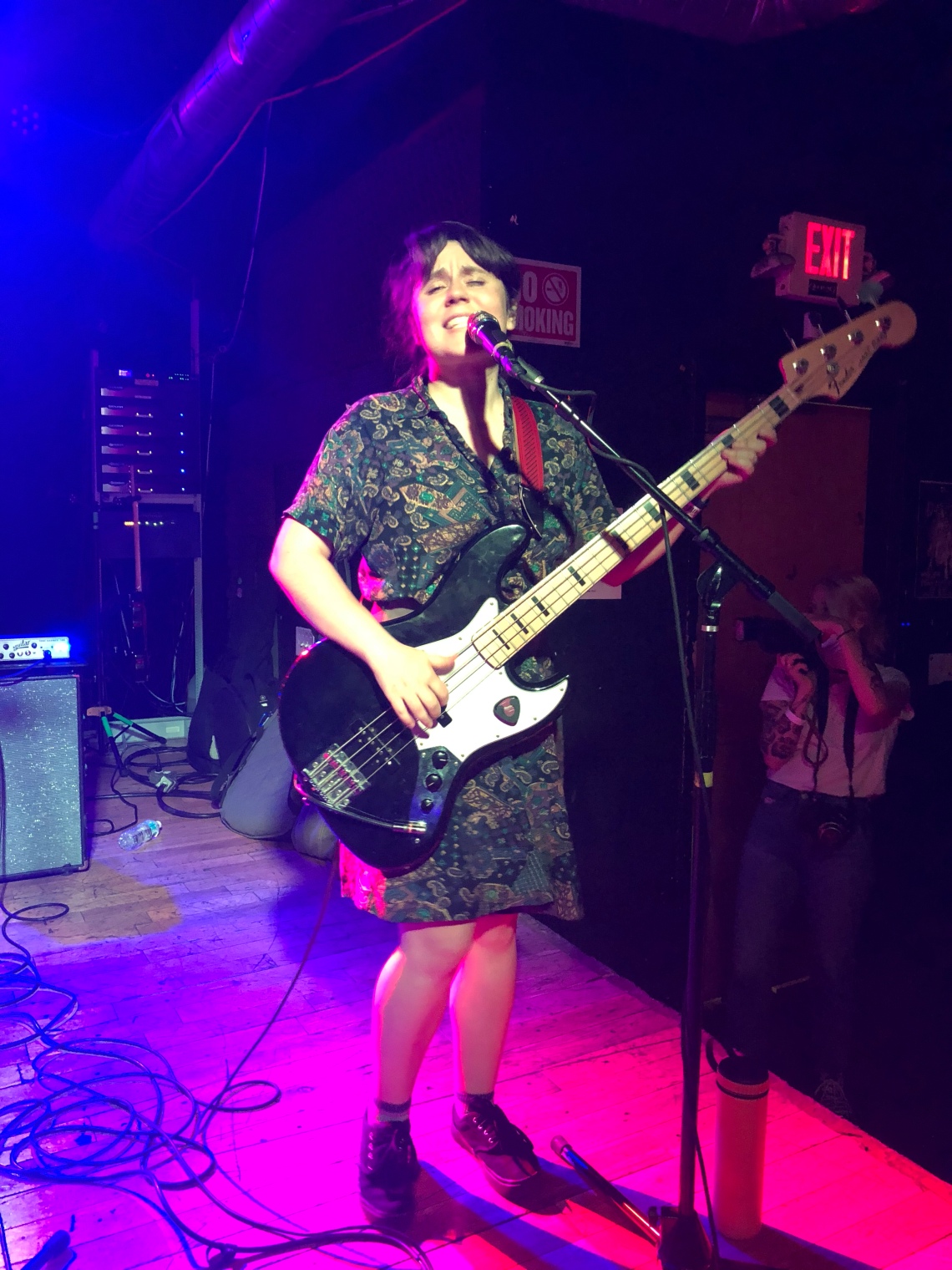 Still, it was great to hear Bent Knee attack great material live on stage, without a net. There can be no doubting these Berklee-trained musicians have a firm hold of what they’re doing, even as they bounced about the stage with reckless abandon. This is particularly true of Levin, who I just knew was going to wrap himself up with his own guitar cable sooner or later. Luckily that never happened.

Speaking of Levin, the guitarist (who hails from St. Louis) provided me with an unexpected thrill by recognizing me in the audience and complimenting my writing. I recognize musicians all the time, but this is the first time a musician recognized ME. That will be with me for a while. We also had a little bonding moment, which photographer Kelsey Ayers caught. The best moments are often unexpected. This qualified.

Bent Knee is a highly skilled band with the perfect mindset. They take their music seriously, but not themselves. Music is fun, and that’s precisely how they treat it. As long as that mindset remains, there’s no telling where this group can go from here. My sense is the days of catching this band in tiny, intimate venues are rapidly coming to an end.

You owe it to yourself to buy this band’s music, and to see them live. Bent Knee is the cure for commercial music’s never-ending mediocrity. I’ve said it before, and I’ll say it again: in a just world, this would be the band burning up the charts and winning Grammys.

It took a little time, but I finally got to see one of my favorite bands in concert. They were definitely worth the wait.

Check out my new book, I Can’t Be the Only One Hearing This: A Lifetime of Music Through Eclectic Ears. It’s available from Amazon, Barnes and Noble, and other fine book sellers.