I’m giving very serious thought to relocating from St. Louis to Chicago in a couple of years. I took my daughter there on vacation last August, and have been back four times for concerts since then.

Everyone falls in love with their vacation spot. I’m well aware of this. The weary traveler blows into town, sees the best aspects of a city, and declares it 180 change from what he’s used to. My daughter and I saw lots of the sites during our first trip. Since then, I’ve been looking hard at the city itself.

There are plenty of things for me to dislike about Chicago. It’s a huge city, and quite crowded; the winters can be bitterly cold; traffic is murder pretty much any time of the day; the cost of living is a bit higher than what I’m used to. But I can overcome these so-called obstacles with relative ease. It’s just a matter of making adjustments.

Like any major city, there are good areas and not-so-good areas. I’ve been a policeman for more than two decades, so I have enough sense to know where I want to spend my time and where I don’t. So where would I live in or near Chicago? I’ve talked to several current and former residents, and one area I heard about more than once was Oak Park.

Prior to heading to the Vic Theater to catch Steven Wilson, I decided to spend a little time in the Oak Park neighborhood. I was told there were three record stores in close proximity to one another. That was more than enough reason for me to make my way there.

My hotel was just off the Magnificent Mile (a lucky break). Oak Park wasn’t exactly across the street. My normal mode of transportation when in Chicago is Uber. But that’s — for the most part — a tourist move. If I’m going to live in Chicago, then I need to get around like a resident. I didn’t have my car (and probably wouldn’t use it very much even if I did have it), so I decided it was time to experience Chicago’s mass transit system. 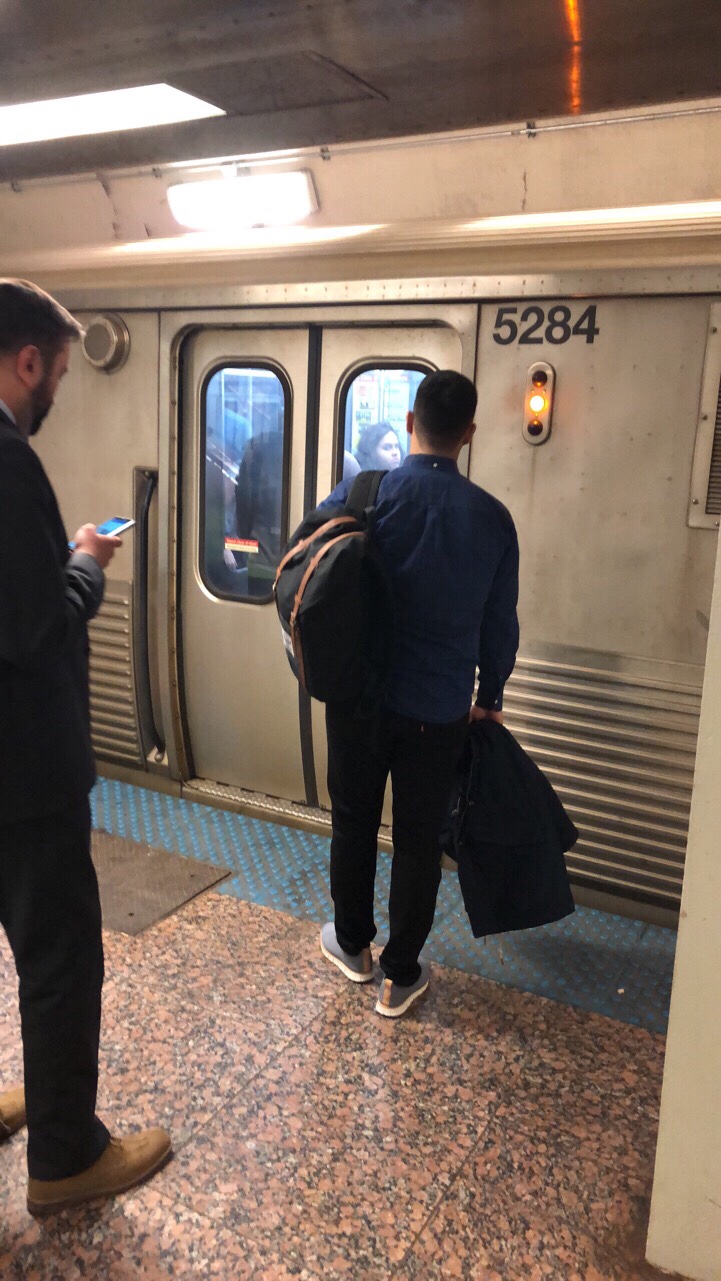 At first, I was apprehensive about riding the El train. I was feeling overwhelmed by the number of lines and stops. Then I remembered: I rode commuter trains in TOKYO for two years! And I could barely read the signs! Chicago, by comparison, should be a walk in the park. And you know what? It was!

To get to Oak Park, I had to walk about half a mile from my hotel to the Red Line train, located at Chicago and State. I took that train to the Jackson Street station, where I transferred to the Blue Line. That train took me directly to South Oak Park Avenue. Easy! 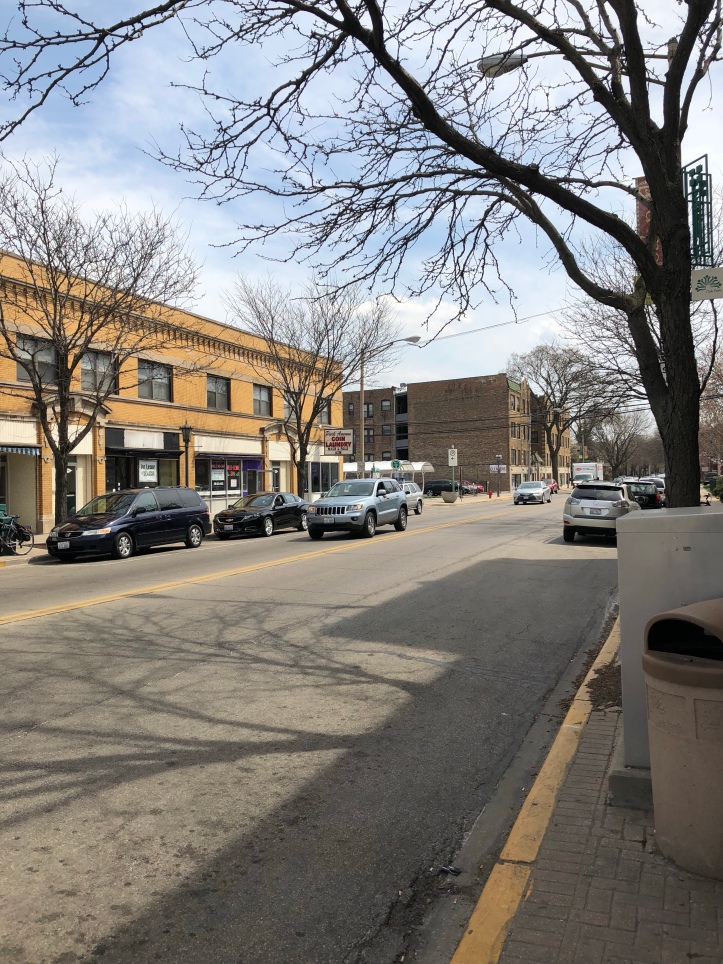 My first impressions of Oak Park were largely positive. I was reminded of a neighborhood I patrol called The Grove, on a much larger scale. The area has suburban overtones, but I wouldn’t call it The Suburbs as I know them. Still, I liked what I was seeing. My GPS told me I was just short of a mile from my first record store stop. At first, I looked for a bus. But the weather was perfect that day, and it made a lot more sense to walk. After all, I wanted to experience the neighborhood.

My walk took me past trendy restaurants, art galleries, small businesses and assisted living facilities. And houses. With yards! They weren’t huge yards, but I was still a little surprised to see them. This is what happens when you make assumptions about an area without actually going there. Granted, it was a Tuesday afternoon (the best way to gauge a neighborhood is usually on a warm Friday evening), and I didn’t wander too far off the main street. But my “day job” senses told me I was in a pretty good place.

Before I knew it, my walk had me in front of Oak Park Records. Its storefront is relatively low key. I almost walked past it! Inside, it looks just the way an independent record store should look.

It was here I met Alan Heffelfinger, who is the owner, proprietor, and the sole employee of Oak Park Records. He’s a nice, unassuming man whose passion for music is evident within seconds of striking up a conversation. He had a knowing smile for every record store I mentioned visiting on past trips and as a future objective. He was able to offer thoughts on every store, not because he saw them as competitors, but as members of an extended family. Speaking of which, it’s not every day you hear about a record store that closes for an hour a day during the week so the owner can pick up his kids from school. I liked this guy right away. 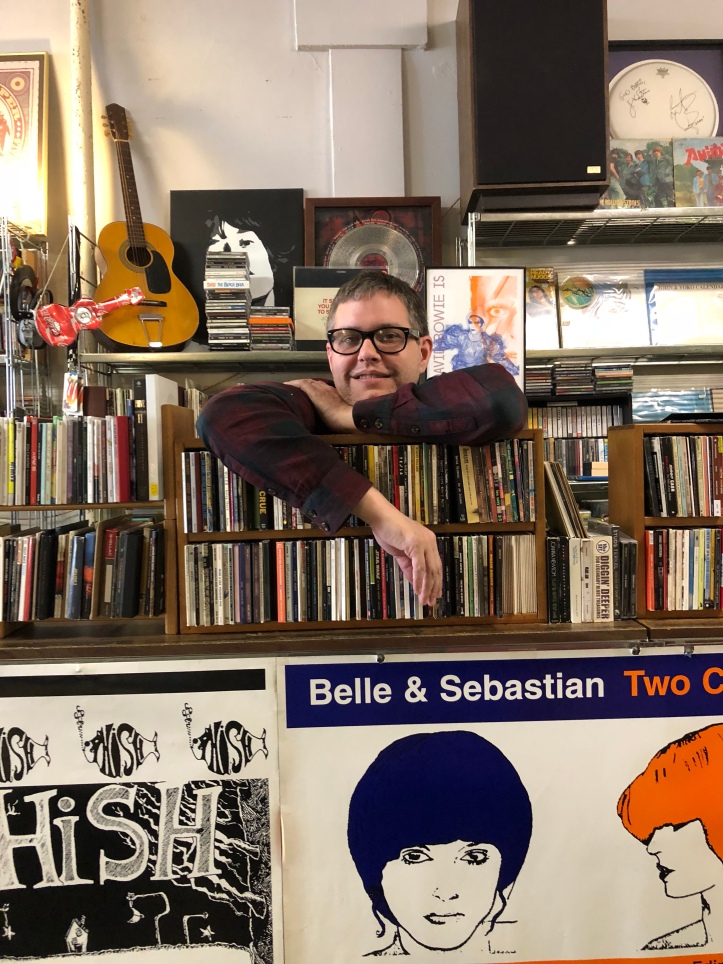 I’ve made it a habit to ask local record shop owners to introduce me to music native to their area. But this is the seventh or eighth record store I’ve visited in Chicago. Slowly but surely, I was starting to get the same answers. I wound up buying a few CDs from Chicago-based post-rockers The Sea and Cake.

I really like Oak Park Records. It feels like a comfortable place to set up shop and hang out for a while. This seems like a good place to really dig in to the Indie and College Rock Sounds I’ve enjoyed over the years. This store is definitely on my list for a return visit.

It’s funny how things work out. I turned right upon exiting the Oak Park El station, and walked a mile to get to my first store. Had I turned left, I would’ve walked about 75 yards before looking smack into the doorway of Chicago Digital (still on my map as Chicago Compact Disc). Oh, well. What’s a two-mile walk for a new record store?

I didn’t have both feet in the door before I was reminded of St. Louis’s Record Exchange. There is stuff everywhere! A place like this is fun because the shopping is only part of the adventure. What we have here is a musical scavenger hunt or archeological dig.

The owner and operator, Chris Miller, is a true artisan. As much as he enjoys and appreciates music, he is equally enthused by his art, mostly in the form of sculpture. The man has quite the gift. 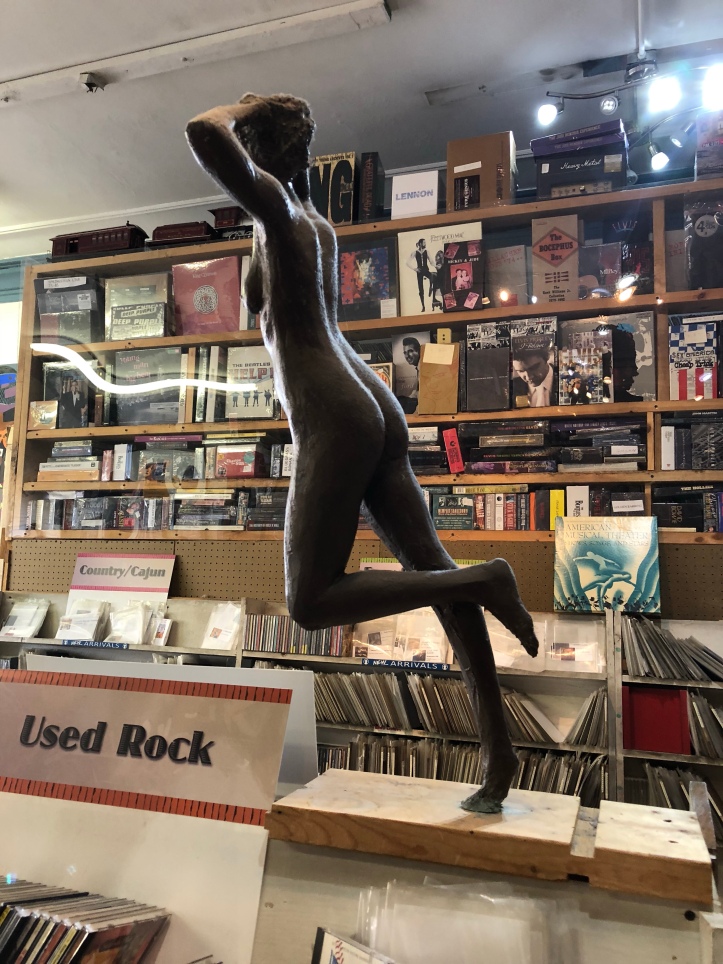 When I look at Chris, I’m reminded of that eccentric scientist from the low-budget sci-fi movies. What looks like chaos is completely orderly to him. If you’re in a hurry, it would be much more efficient to tell him what you’re looking for. I have no doubt he’ll be able to find it. 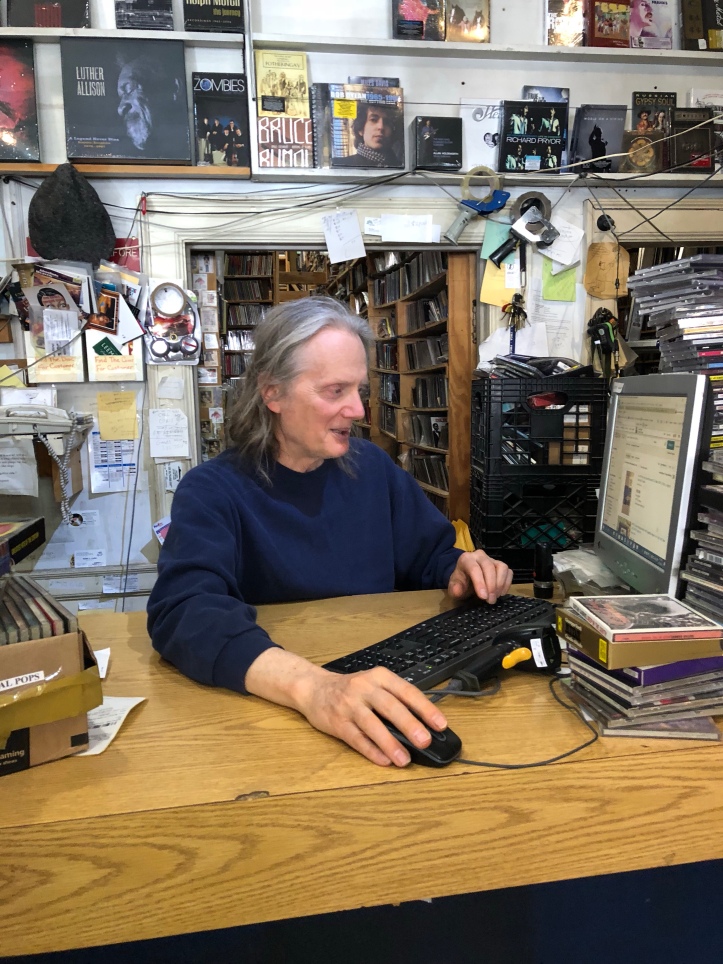 The next time I come here, I’ll be sure to allot plenty of time. I have no doubt there is plenty of treasure to be found within these walls. I just need the opportunity to find it. Alas, I had one more stop to make before heading back for the concert. It can be argued that I saved the most legendary stop for last.

I hopped back on the train, headed back east. But I was only going one stop down the line, to the Austin station. Once there, it was another three-quarter mile hike — past more artisan shops and furniture stores — to the legendary Val’s Halla Records, an Oak Park institution since 1972. 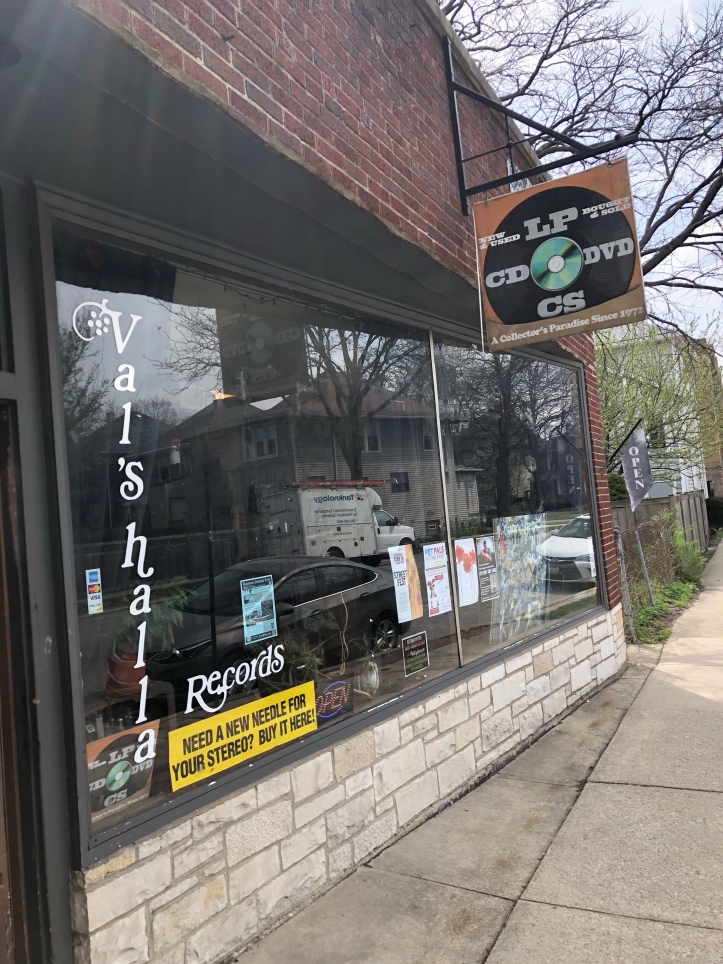 For me, this store wasn’t as much about what was inside as it was who was there. For I had the pleasure and privilege of meeting Val Calmiletti, the owner, operator, and Grand Dame of the Chicago record store industry.

Val has been around the music scene for more than half a century. Name a famous artist, and Val probably has a story about them, including the Beatles. For every story Val tells, there are at least three she doesn’t get around to. I wish I’d had more time to stay and listen to them all.

Of course, Val was much more interested in having me look around the store, where the walls and ceiling are loaded with photos and artifacts. I have no doubt there is a story behind every single item. She also made sure I made my way to the restroom. I couldn’t understand why until I opened the door: 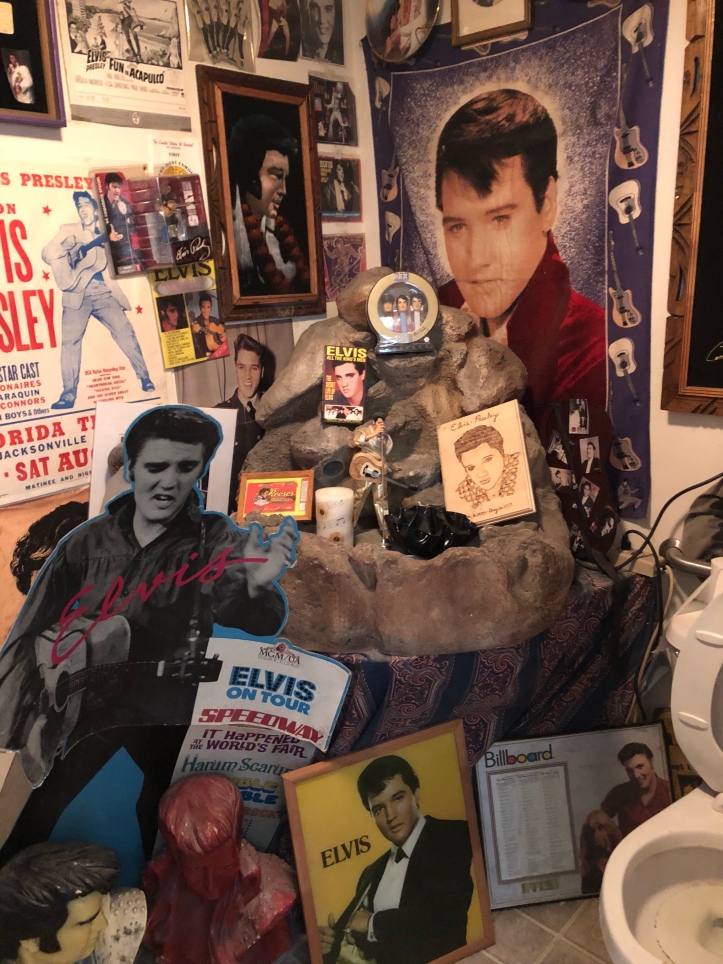 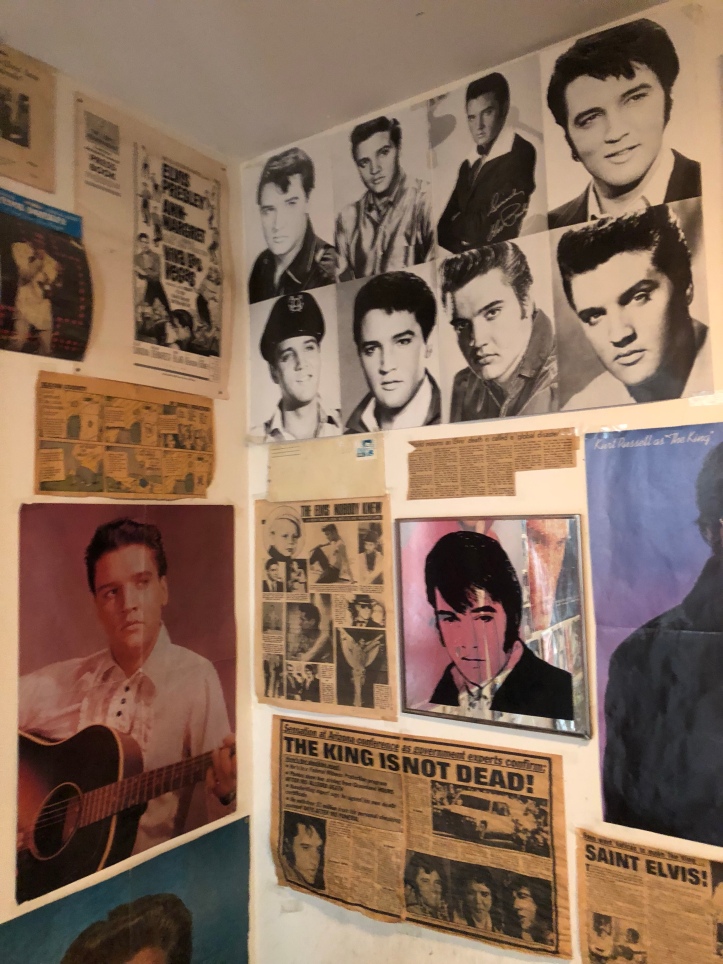 I’m not the biggest Elvis Presley fan in the world, but even I was awestruck by this shrine. Since I was aware of how he died, I couldn’t help but comment on where this memorial was located. Val cut me off with a smile, telling the tale of how one of her former employees felt it appropriate to place it there. “We figured since he died in the bathroom, we should put his shrine there,” she said with a cackle. But it wasn’t disrespect. Val has a genuine affection for Elvis, and recognizes his significance in the history of rock and roll. Even more fascinating, Val told me people came from miles around to see the display, particularly after it was featured in the lifestyle segment of a Chicago TV news magazine show. Go figure.

I’m hoping sometime soon Val will let me sit with her for a few hours, so she can tell me story after story. Something tells me that will be one of the best interviews EVER.

I mentioned my new book to all three store owners, who were each kind and supportive, allowing me to leave a few promotional postcards behind. I can only wonder if they will mention to their regulars the visit from the enthusiastic music fan from St. Louis who never seemed to stop asking questions.

One neighborhood. One afternoon. Three record stores. I can think of few better ways to spend my day. Plus, I got to take a nice stroll through an interesting neighborhood. Would I like to live there? Maybe so. Something tells me I could do a lot worse. To be certain, I’ll be giving this hip neighborhood a second look in the near future.