I had three goals during my latest trip to Chicago. First, see Steven Wilson at the Vic Theatre; second, do a little record shopping in Oak Park; finally, I wanted to return to the Green Mill, which now ranks among my favorite places to hang.

I was introduced to the place by Erik Oldman, guitarist for Sons of Ra. I interviewed him last November while I was in town to see Grizzly Bear, and he suggested we spend some time at the oldest jazz club in Chicago. Better calls are rarely made.

The club is probably best described by its web site. “The Green Mill is sophisticated informality,” their description reads. “(It is) warm glowing atmosphere steeped in the heady sounds of the early ’30s and ’40s. Uniquely comfortable to all audiences from the sequined Saturday night date to the progressively dressed offbeat student, the magic of the Mill is that the audience commingles in its mutual respect for the music.”

I can sum all that up in a single word: chill.

If I’ve hung out in a mellower spot than the Green Mill, I cant think of it. Reportedly, Al Capone used to hang out there during Prohibition. I can understand why.

The Green Mill is a club trapped in time. Everything about the place is old-fashioned, starting with the club’s decor. 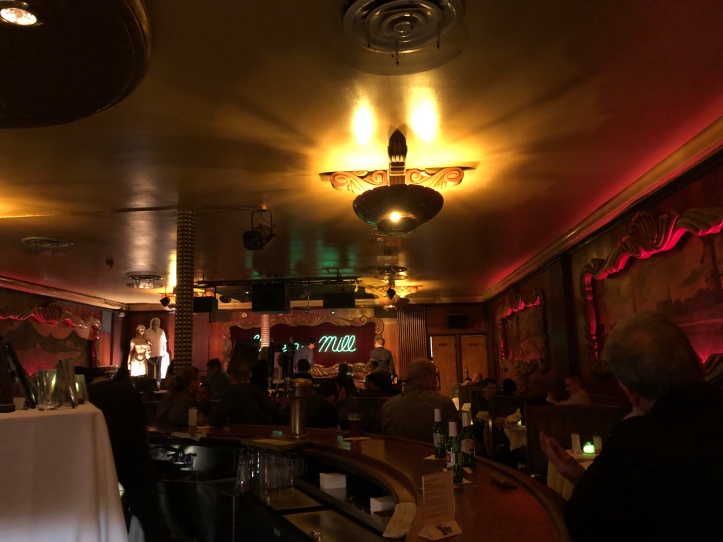 All transactions are handled on a “cash only” basis. This means there is no need for any kind of computerized transaction. Which is why the club’s cash register — equally stuck in time — still works just fine, and makes perfect sense.

Drinks are reasonably priced, the beer selection is solid, and you’re welcome to bring food in with you, should you deem it necessary. The Mill is the perfect place to simply sit back and take it all in.

What I love most about the Green Mill is the inherent respect it holds for its performers. The bands play multiple sets, and before each set the audience is reminded to put away their cell phones and not talk! This makes for one of the more pleasant listening experiences I’ve had in any setting.

On my first visit, Erik and I caught a Gypsy jazz guitarist whose name eludes me. (I do remember Erik and I humming the theme to “Spain” together while the band played it. It was a nice bonding moment.) This time I was treated to a pianist/vocalist named Patricia Barber. More often than not, I tend to avoid vocalists in jazz, even though more than a few are supremely talented. But I wasn’t even concerned about who was playing the club that night. I just knew I was going!

Not surprisingly, Patricia Barber is is remarkable musician, and her trio was in top form. I was so taken by what I heard, I bought one of Barber’s CDs. I didn’t want to get in the band’s faces while they performed, so I took a quick shot from where I was seated.

I stayed for what amounted to about a set and a half. I wanted to hang for longer, but I’d already had a long travel day, and had a lot to do the next day. That being said, I’m glad I made the journey. The Green Mill was the perfect wind down from a hectic day.

I have plans to visit other concert venues in Chicago, like Martyrs or the Park West. But rest assured, I have not made my last visit to the Green Mill. Should I decide to move there, I know for a fact I’ve found my first official hangout spot.

I can’t wait to go back.