MEMPHIS, TN — The weatherman has spent the last couple of days threatening us with the rain to end all rain. I was starting to think this may be a good time to go into the ark business.

The clouds have opened up on us a couple of times, but it’s nothing I couldn’t handle. I’ve worked outside in far worse.

Still, the low dark clouds hung over my sister and me as we made our way to the Lorraine Motel, and the National Civil Rights Museum. Somehow, it seemed appropriate. There’s no way you can think of sunshine when you’re staring at the spot where Dr. Martin Luther King, Jr. was assassinated. 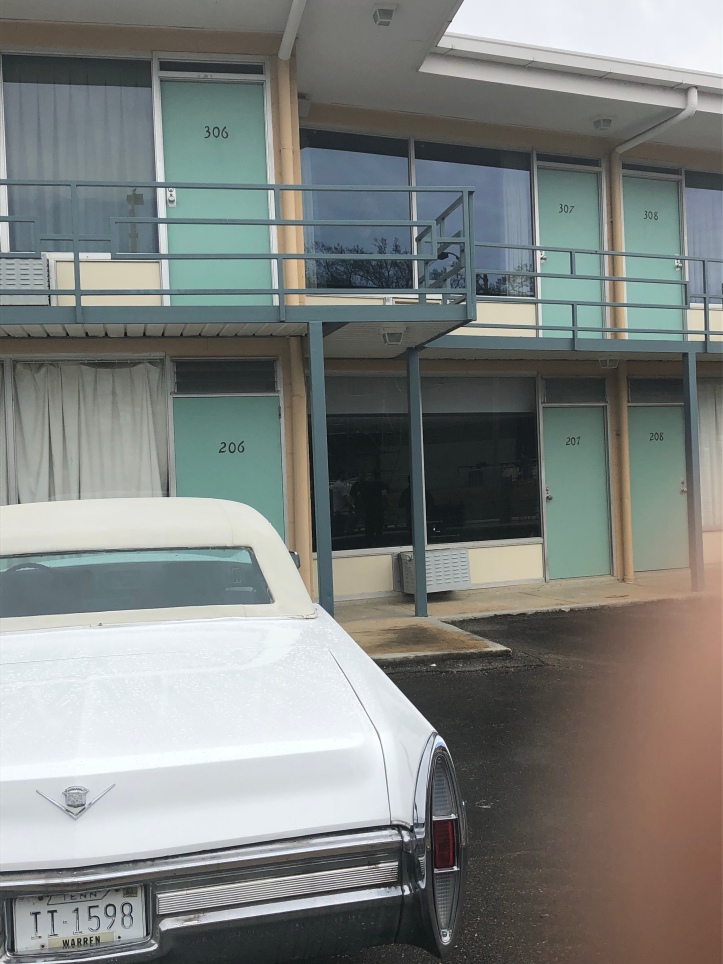 This is far and away my favorite museum (this from a guy who positively lost his mind touring the National Air and Space Museum in Virginia). It’s also the most emotionally draining. Fortunately, I already knew this and was prepared for it. For the most part, I took a mental step back and watched my sister take everything in for the first time. The emotional impact was pretty much what I thought it would be.

I’m not out to push any kind of political agenda. That’s not my job. But I will say this: EVERYONE needs to visit this museum! When we take a good hard look at what one human being is capable of doing to another, maybe we can start to rethink they way we treat one another, just because we’re different.

By the time we reached the spot where Dr. King was shot, the sobriety of the museum’s visitors was at a fever pitch, albeit a subtle one. Yet I couldn’t help but notice when we came out of the museum that the clouds had parted, and we saw a little sun in the Memphis sky. I, for one, found that rather poetic.

The evening was about music. After a decent dinner and a little rest, it was back to Beale Street to soak up a little local sound.

I had no set agenda. I had no idea who was playing or where. It made the most sense to just walk the street and listen. I’d be drawn in by whatever grabbed my ear. It took about half a block before I found myself pulled into the Kings Palace Cafe’s Tap Room.

Inside, I found a band called Three Piece Chicken and a Biscuit. As I walked in, the band was burning through “Sweet Home Chicago,” a bar band staple (albeit a well-played one). They also ripped through smoking versions of “The Sky is Crying” and “Mannish Boy.” Three Piece truly had the blues! They were fun to watch, and well worth my contribution to the tip jar.

I wandered in and out of two or three other clubs before succumbing — happily — to the inevitable, and heading into B.B. King’s Blues Club. Five bucks later, I was inside, waiting for the band to hit the stage. That I didn’t know who it would was irrelevant.

As it turned out, I was catching a band known as the B.B. King All-Stars. Their music director and guitarist was a man named Harold Smith, who’s instrument positively smoked.

The band stayed true to its roots, tackling tunes from Wilson Pickett, Stevie Ray Vaughan, and the club’s namesake. I was in my happy place. Alas, this is the biggest, most frequently visited, and — let’s be honest — most commercial club on Beale, outside of the Hard Rock Cafe across the street. The band had to get the party started! So out came “Mustang Sally,” followed by a slew of R&B classics. My decent view was obscured by a suddenly packed dance floor, and my personal vibe was altered. Sigh …

Still, it was nice to actually sit and enjoy some Memphis music, unlike last time. And I still didn’t go as deep as I wanted. I didn’t make it to any non-Beale Street or Museum-based record shops. I’ll save that for my third trip, when I plan to fully immerse myself in the sounds of the city, including finding a club or two off Beale.

It’s nice to have goals.

It’s not hard to find ones soul in Memphis. The vibe is all around, from the moment you drive into town. Some of those influences will end up playing right in front of you. Some of them are ghosts. In any case, it’s a vibe and sound I cherish. With all due respect to Berry Gordy, I’ve always preferred the Stax sound to Motown. The Memphis sound has that extra oomph I prefer to the slicker, more commercial sound that came from Detroit. Maybe it’s the history of Memphis — the triumphs and tragedies — that make that sound possible. Whatever it is, I’ll always love it.

This has been a good trip. I hated to see it end. But it’ll be time to head back out on the road before I know it, as Chicago beckons once again. For now, I’ll keep savoring the sounds of Memphis, and how they’ve shaped me and my world on multiple levels.