Whether or not “fusion” was a thing in 1979 is arguable, even as artists like Jean-Luc Ponty and Brand X made themselves part of the soundscape of the era. Drummer Bill Bruford’s first band as a leader, appropriately named Bruford, would not say for certain whether his band fit into this particular little niche. Most would lean toward the affirmative. Any doubt would be removed quickly by playing Rock Goes to College (Winterfold), one of the earliest gigs from this newly-formed band, recorded by the BBC on March 17th of that year. to be certain, the audience at Oxford Polytechnic in England were getting a higher musical education.

Accompanied by three would-be legends in their own right (keyboardist Dave Stewart, guitarist Allan Holdsworth, and bassist Jeff Berlin), Bruford goes tearing roughshod over material from its then-forthcoming record, One of a Kind, in addition to their already released debut album, Feels Good to Me. The playing is crisp and tight (save for one minor stumble), making it hard to believe the band isn’t more experienced than they really are as a unit.

Equally sublime are the vocals of Annette Peacock, whose singing lilts and weaves its way through the center of already complex compositions. No doubt the audience has no idea how fortunate they are to catch this band, as it would only last a couple more years.

This is Bruford’s definitive version of the album, which also contains a DVD of the show. The perfect place for anyone with lofty fusion ambitions to determine their worth as musicians.

Probably best known for thundering away behind Branford Marsalis, bassist Eric Revis steps to the forefront and lays down many-a tasty groove on his own album, Slipknots Through the Looking Glass (Pryoclastic Records). And while it would be easy to dominate the mix, Revis chooses instead to let his playing be the anchor around which his band (pianist Kris Davis, saxophonists Darius Jones and Bill McHenry, and drummers Chad Taylor and Jason Faulkner) as they update the classic jazz sound with riffs more suited for 70’s struts and voyages into the avant-garde. Some of the sounds go where angels fear to tread, but that’s the beauty of jazz: every song can be an adventure. 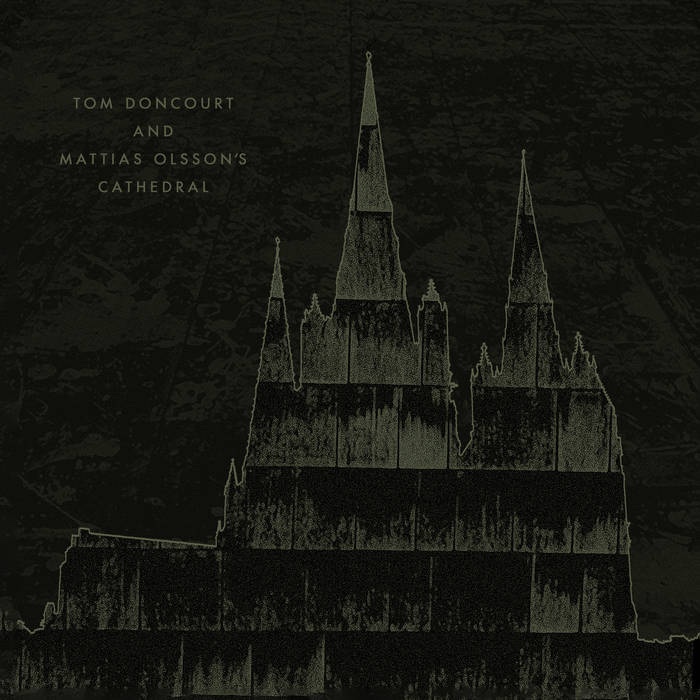 From sadness, brilliant music. In 2018 and ’19, Mattias Olsson was working sporadically on new music with his dear friend Tom Doncourt whenever the Swede visited Long Island, New York. The music was true collaboration, coming from a series of later-organized improvs or pieces of song ideas presented to one another. The casual approach to the music suited both of them.

Ultimately named Cathedral (Roth Handle), the only definitive thought between the musicians was they wanted the album to be progressive rock. Unfortunately, they also knew Doncourt was seriously ill, and his time to work on the album was severely limited. In fact, Olsson received the last musical sketch from his partner just two weeks before he passed away in March of 2019.

Olsson dutifully and gracefully went about finishing the album, which earns its “progressive” label through its constant shifts in tone over the album’s relatively short (36-minute) length. The one constant is the clear passion behind each song, rich in texture and sincere in meaning.

An oldie but a goodie, as they say. Memories of “Urban Contemporary” radio stations waxing poetic about this album, the soundtrack to a film of the same name, are fuzzy at best. That was 1979. Hotter than July, released a year later, was seemingly all over the place by comparison.

With the benefit of hindsight, radio’s trepidation is understandable. Most of the music herein wasn’t necessarily geared toward commercial airplay. Though it’s a safe bet a college radio station or two picked up on it. The album’s sound is pure Stevie Wonder, but with a deeper sense of experimentation and adventure during the instrumental passages. When he sings, a sense of complete familiarity emerges.

This is one of those records musical deep thinkers truly appreciate. Those looking to simple wiggle their hips should look elsewhere, and let the seekers of art enjoy this one.

You can follow me on Facebook, Twitter, and Instagram (cirdecsongs) My book, I Can’t Be the Only One Hearing This: A Lifetime of Music Through Eclectic Ears, is available from Amazon, Barnes and Noble, and other fine book dealers. I’m currently working on my next book, The Wizard of WOO: The Life and Music of Bernie Worrell