There weren’t a lot of female jazz instrumentalists around in the 1980’s, when I was first introduced to the genre. The females I knew of were primarily vocalists like Sarah Vaughn, Billie Holliday, and Ella Fitzgerald. Unfortunately for them, while I respected their singing abilities, one of the primary reasons I wanted to explore jazz was to get away from vocalists. So that avenue went largely unexplored.

Recently, when I realized I had in fact skipped over an entire generation of dynamic young jazz musicians (mainly because I was the Alternative music movement of the 90’s), I decided to jump back into the genre with both feet. I also made a conscious decision: not only would I concentrate my efforts on what I came to call FutureJazz artists, I would also make an effort to seek out female instrumentalists. They had to be more prevalent in this day and age, right?

Indeed they were. Thanks to apps like Bandcamp and Soundcloud, I got to know many up and coming female jazz instrumentalists like guitarist Mary Halvorson, vibraphonist Yuan Su, and a remarkable young flugelhorn and trumpet player named Yazz Ahmed.

So many musicians find their root in their favorite artists, and their instrumental “voice” becomes derivative of that influence. I never got that vibe from Ahmed, who’s warm, round tone burned with intensity while simultaneously putting the listener at ease. When I did hear an influence, her ethereal compositions reminded me less of classic jazz musicians, and more of the Alternative rockers and electronic musicians I had already been immersed in, along with exotic percussion touches from Bahrain, her paternal homeland.

La Saboteuse, the first album I bought, turned jazz on its ear. It was jazz music not based in the blues, which is the common American approach. This was something else indeed. Her cover of Radiohead’s “Bloom” made me that much more enamored with her music. In time, I would find out she provided the flugelhorn on Radiohead’s original version, found on The King of Limbs.

La Saboteuse was released in 2017 to critical acclaim. In 2019, she followed that album up with Polyhymnia, an album named for the Greek Muse of music, poetry, and dance. The record is described as “a celebration of female courage, determination, and creativity.” It strikes a substantial blow for the #MeToo movement, given the overwhelming dominance of brilliant female musicians performing on the record. I personally found it to be one of the best jazz records I heard in 2019.

Ahmed continues to push forward, taking her music into new territories, leaving a positive musical mark wherever she lands. She will no doubt be an inspiration for future jazz musicians from all walks of life.

From her home in England, Yazz Ahmed was kind enough to answer Seven Questions from CirdecSongs

CirdecSongs: What led you to explore jazz, and how has your musical upbringing brought you to this point?

Yazz Ahmed: I’ve always loved music. My mother played a huge variety in the house, everything from Mussorgsky to Burning Spear, as well as Bahraini folk music from my father’s side of the family. However, my true gateway into jazz came via my maternal grandfather, Terry Brown. He was a professional jazz trumpet player in the ‘50s, and performed with British jazz legends such as Tubby Hayes, Ronnie Scott and John Dankworth. Later he became a record producer. I loved the music he shared with me and his tales of life on the road. It’s the freedom of expression in jazz and the personalities the musicians reveal through their improvisations that got me hooked.

Inspired by my grandfather, I started learning the trumpet at the age of nine, playing in the various youth bands at the Merton Music Foundation, then later studying for a degree in music at Kingston University and a Masters in jazz at the Guildhall School of Music and Drama.

After graduating, I became more involved in composing and began searching for my own voice in such a crowded music scene. A pivotal moment for me during this time was when I began rediscovering my roots, fusing jazz elements, creating music that was true to me. I later began experimenting with electronic effects, adding new colours to my acoustic trumpet sound, finding inspiration from ‘found sounds’ and manipulating field recordings, using the studio as a compositional tool.

You are at the forefront of FutureJazz, meaning you combine the classic elements of the form with more 21st century musical styles. What leads you to hear a song like Radiohead’s “In Bloom,” and think, I can turn this into jazz?

After hearing the completed recording of Radiohead’s ‘Bloom’, that my partner (Noel Langley) and I played on, I instantly thought that this piece would work really well for my band. The flowing melody lines over strong and complex grooves felt reminiscent of the relationship between melody and rhythm associated in jazz. The harmonic openness and compositional space allows room for improvisation – one of the key elements of jazz. Also, the use of flugelhorns, which have become such popular jazz voices, helped with my reimagining of the piece.

How did you find the musicians you were looking for to make this record? What made them the right people?

There are about 26 musicians in total on Polyhymnia, including Naadia Sheriff, Samuel Hällkvist and Corrina Silvester who were also featured on La Saboteuse. They are joined by two musicians from my current touring band, George Crowley and Ralph Wyld, plus others I have enjoyed working with over the years, such as, Tori Freestone, Alcyona Mick and Sophie Alloway. Quite simply, the players featured on the album are a mixture of friends as well as the performers who premiered the suite back in 2015. All of them are amazing instrumentalists and improvisers, so I made sure there was space for the musicians to express themselves.

In addition to multi-faceted music, Polyhymnia brings with it a distinctly feminist message in many places. What exactly do you want to get across to listeners, and what led to this declaration?

I think what led to this ‘declaration’ was my growing awareness that many achievements, made by women, have either been underreported or even erased from history.

The women who inspired the music (Hafiaa Al-Mansour, Ruby Bridges, Malala Yousafazi, Rosa Parks, the Suffragettes, and Barbara Thompson) share some similar traits: they are all strong; courageous; determined; dignified; they refuse to give up; refuse to be ignored and carry on fighting against the odds, spreading their message to the world. These are characteristics I greatly admire and perhaps try to emulate in my own small way.

By sharing my musical response to the stories and achievements of these exceptional women, and celebrating the creativity and talents of my co-contributors, my hope is to inspire others, in the words of Malala, “to be brave, to embrace the strength within themselves and realise their full potential”.

Your generation is amongst the first to truly have to pursue music under the new economic model, where streaming is the listener’s preferred method of consumption. You are lucky enough to have a label, where most others are independent. How has this affected your musical output, and how do you see it affecting you going forward?

There are so many avenues to get music out to people and I don’t think any one way is the best. Self releasing can offer you more control and is not necessarily a barrier to success. From my experience however, labels can offer financial support by providing the manufacturing costs of records and PR, both of which are extremely expensive and something I certainly have struggled to fund on my own. So, signing to in 2016 Naim Records and Ropeadope Records in 2019, has brought my music to a global audience in comparison to my first album, Finding My Way Home, which was a self-release, perhaps reaching my friends and family only!

On a personal level, I think the support from record labels has helped me to take my music seriously, improved my confidence and inspired me to continue my sonic explorations.

What was your favourite aspect of making this record?

My favourite part was the two day trip to Copenhagen to record Samuel Hällkvistoverdubbing his guitar parts. It was pretty much the final piece of the jigsaw and it felt really good to know that we were almost ready to share the music.

You’re in front of your dream band. Who’s behind you? You can pick any musician from any era.

I already have my dream band!! 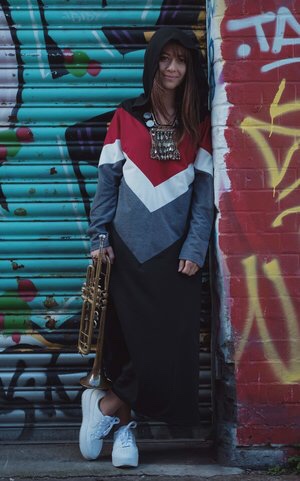