Hotel Not Surprised This Time, Chicago

I’m back in The Closet. But it’s only overnight this time. It’s nice to be back in the Old Neighborhood. That’s certainly how it feels. This is a quick trip, so being in the tiny hotel room overnight isn’t quite as bothersome. Next trip (in January) I’ll get a bigger room.

Managed to sleep for three hours on the train, so I actually feel pretty good. I’m happy to be here. I’m looking forward to living here. But DAMN, this place is Next Level COLD! For the time being, whatever they say the temperature is, I’m knocking off ten degrees.

I got to my hotel much more quickly this time. All I needed to know was which way was west. After that, it was simple. I was even cocky enough to leave my headphones on the whole time. And despite my early arrival, there was actually a room available.

It wouldn’t be a road trip if I didn’t forgot something. I got all the way here before I remembered. Gloves. I forgot my gloves. Well, there’s a Target close by. Guess I’m going shopping.

Speaking of which, I’m gonna head out to Oak Park for a hot minute. I’d like to say hello to Alan at Oak Park Records, and Shane at Val’s Halla. So glad Val’s place was rescued from the brink.

Came across the street to my favorite eatery. Breakfast is long overdue. There were four CPD officers enjoying a meal when I walked in. I was giving serious thought to picking up their check, as has been done for me several times. Alas, another nice lady beat me to it. Brought a smile to my face all the same.

My weekend of near misses continues. Old friends come to town, and I just miss seeing them. I head out to Oak Park, but not before I find out that Oak Park Records is closed today. I keep forgetting it’s Sunday. It’s been Monday in my head pretty much all day.

The good news is Val’s Halla was indeed open, and I made my way there. The store came so close to being shuttered for good. It was great to see it continuing to bring in business. They have adopted quite the “never say quit” attitude.

The bad news is Shane, the store’s manager since Val’s passing, actually got a day off today, courtesy of the store’s new co-owner. Another near miss.

The store is still rebuilding its inventory, but I was able to score a couple of finds, knocking two more records off my Vinyl Jazz Wishlist.

I took a little break, and now it’s time to head off for the reason I’m in town in the first place. 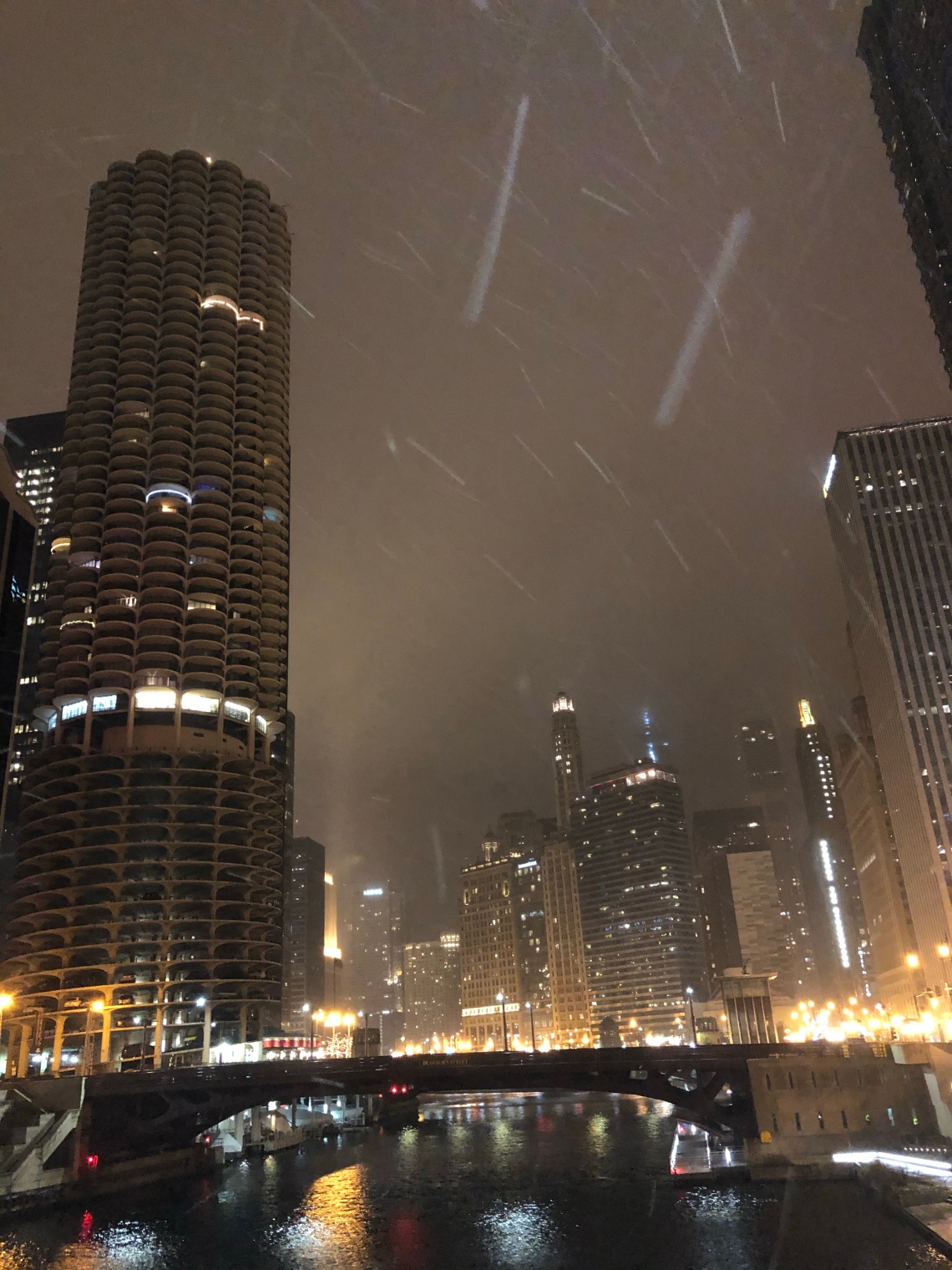 I took a wrong turn coming out of the Bottom Lounge. So I spent a little more time walking the streets of Chicago than I planned. That it was cold and snowy didn’t help matters.

I almost gave in and called an Uber. But my stubborn streak kicked in, and I refused to be defeated. After 15 minutes are so, I found a familiar street, and determined which way was north. Before I knew it, I found the bus stop I needed. From there, it was easy. I’m quite proud of myself.

The Pineapple Thief was amazing! They tore the roof off The Bottom Lounge. I’ll go into more detail later, but I was able to get some good shots. This trip has been completely worth it! 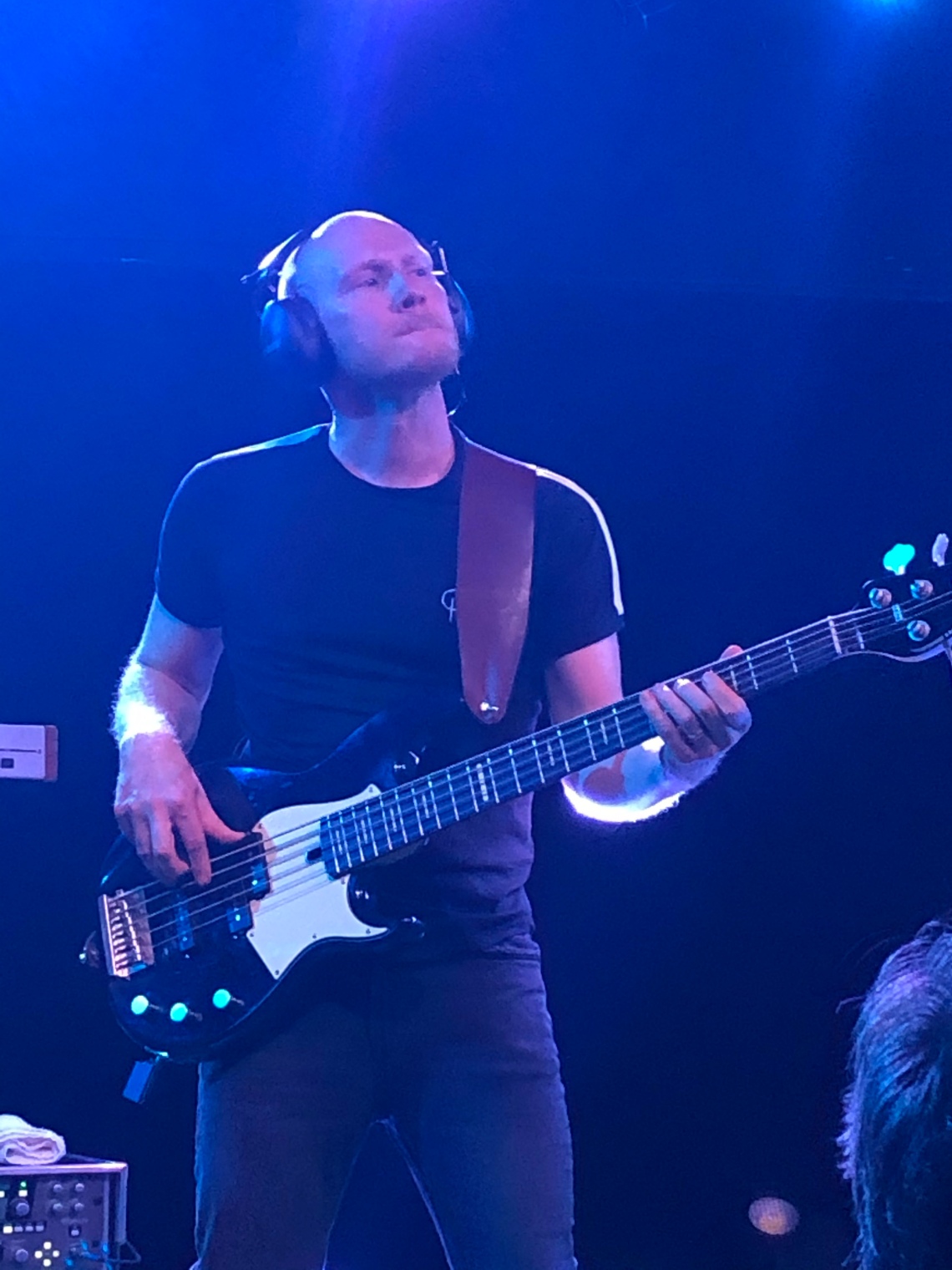 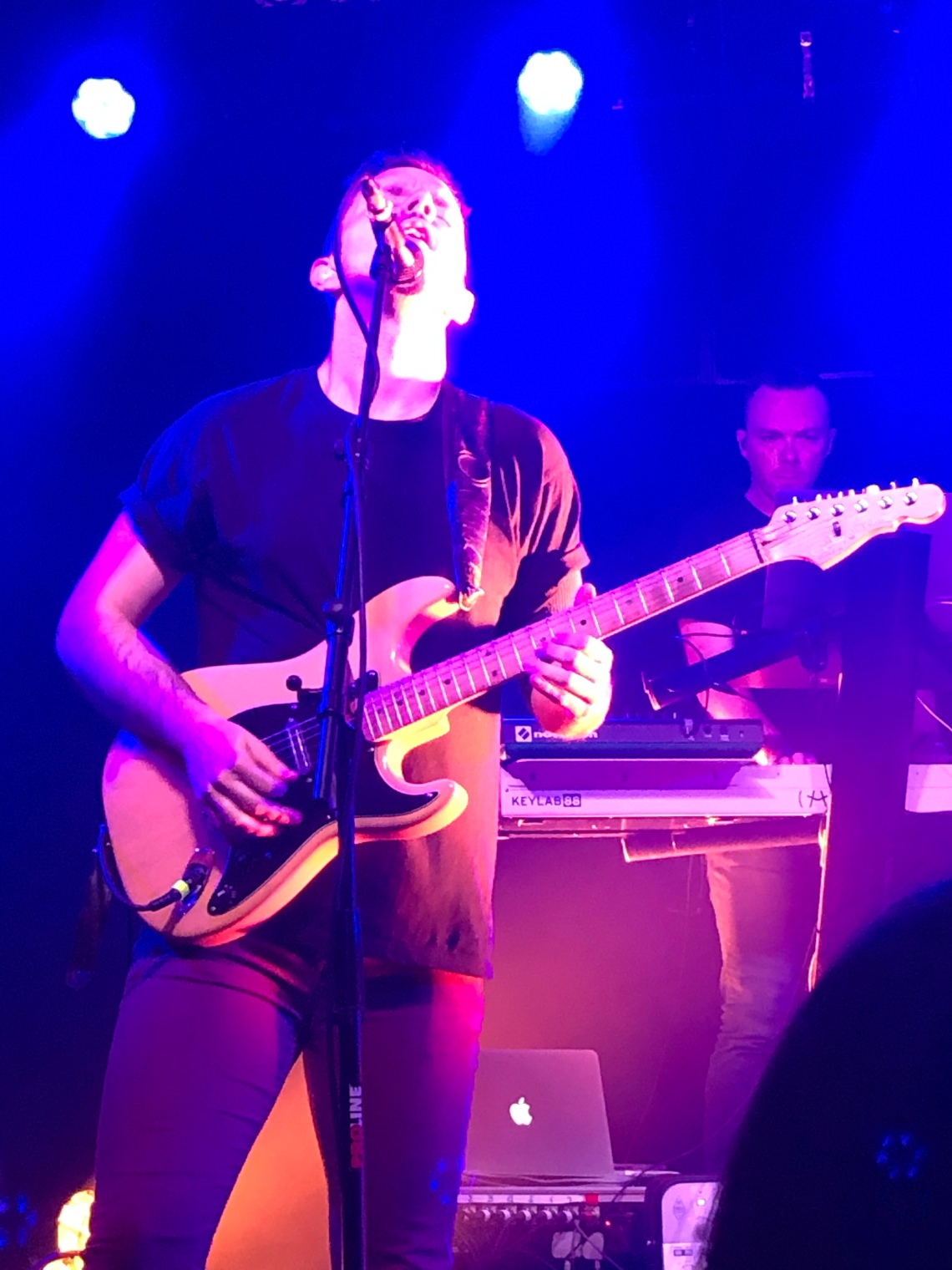 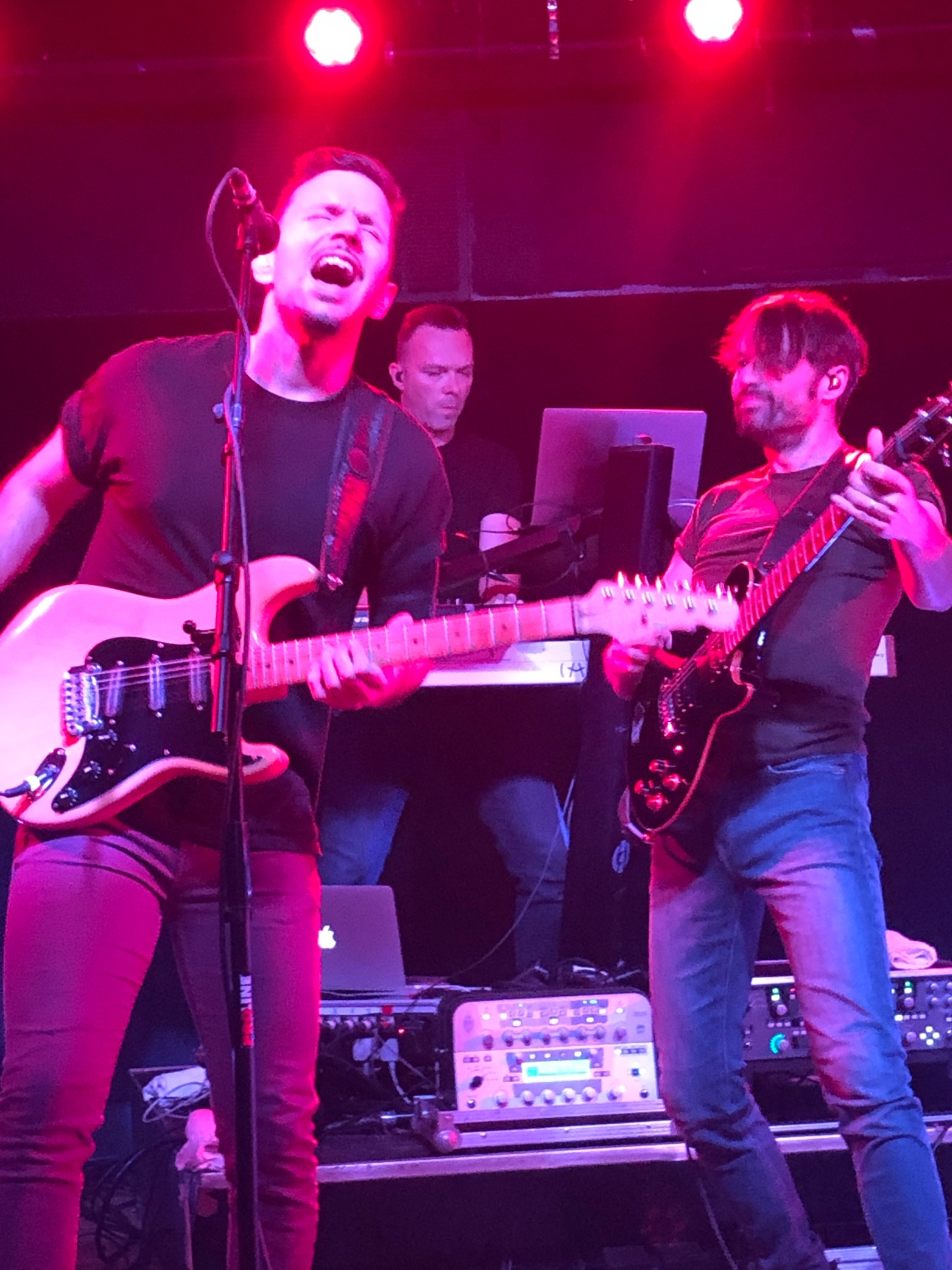 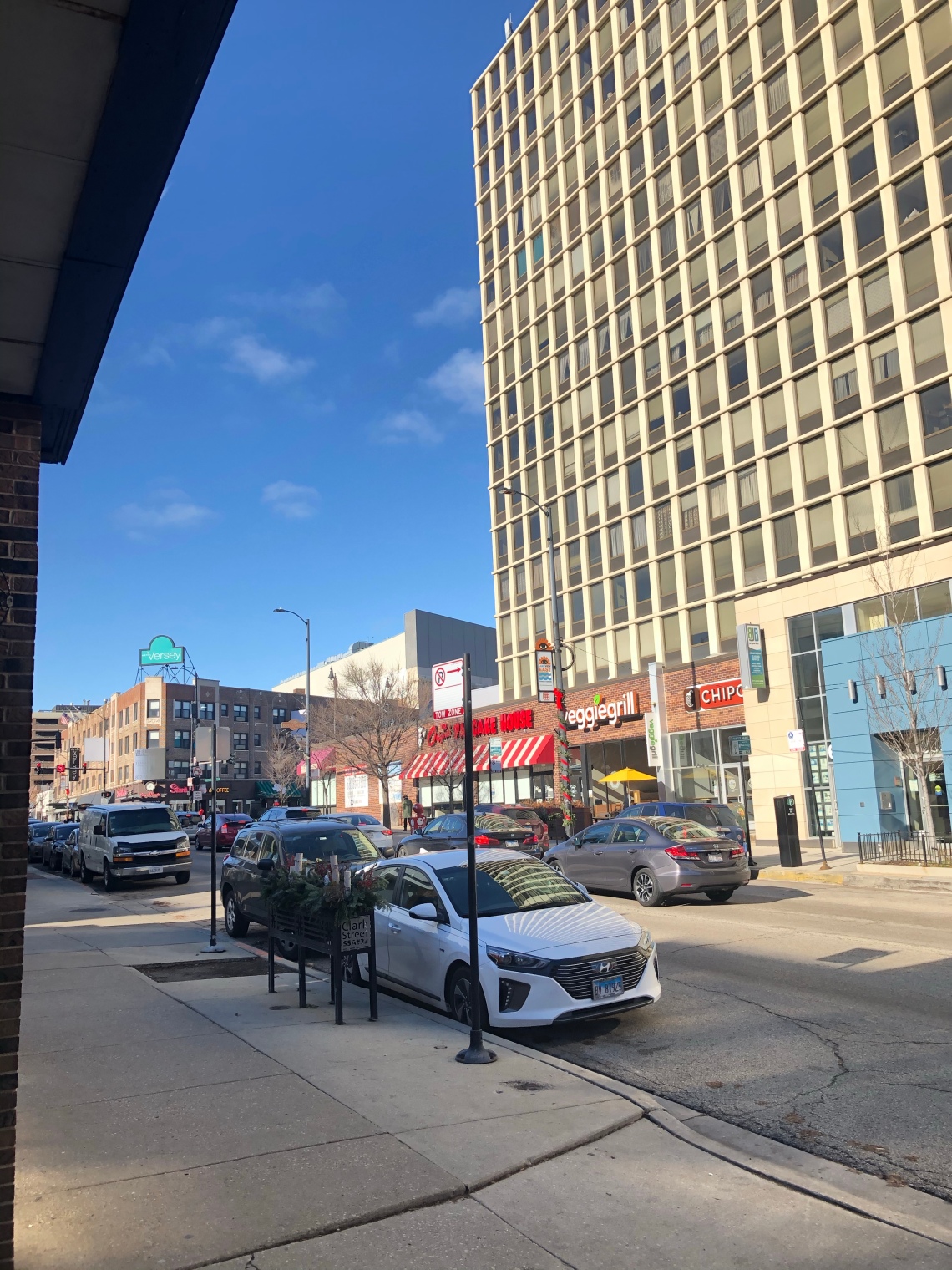 Life comes down to a series of moments, they say. In an hour or so, I’ll have another one of them. I’m scheduled to look at another condo. It looks good on paper, so to speak. I’ll know more once I see it in person.

My post-concert hangover — body aches and pains — isn’t too terrible. I’m sore, but I’ll manage. I’m definitely gonna have to space out the standing gigs. And get into better shape.

I was actually recognized a couple of times last night. It’s a weird feeling, but rather gratifying. My words aren’t going unnoticed. Here’s hoping that amounts to something down the road.

And so ends another (brief) adventure. It’s time to go back from whence I came. I’m looking forward to being around my stuff, but it gets harder to leave this town every time.

I wasn’t feeling the condo. The neighborhood didn’t seem as good (though it was far from terrible), there’s no garage, and the interior was antiquated. All for twice as much as the place I’m in love with. That pretty much says it all, doesn’t it?

Well, my real estate agent knows what I want now. He’s on a quest to find it.

I tell people all the time that my hotels are less than two miles south of Wrigley Field. The condo in question was north of the ballpark. I wasn’t thinking about baseball as I rode the bus north on Clark. When we got to West Addison, it dawned on me. I looked to my right, and there it was.

I was too busy soaking it in to photograph it, but I was determined to stop for a quick look on the way back. So I did.

I have nothing but respect for Ernie Banks. He was a true ball player. So I was glad to come across this as I looked around. 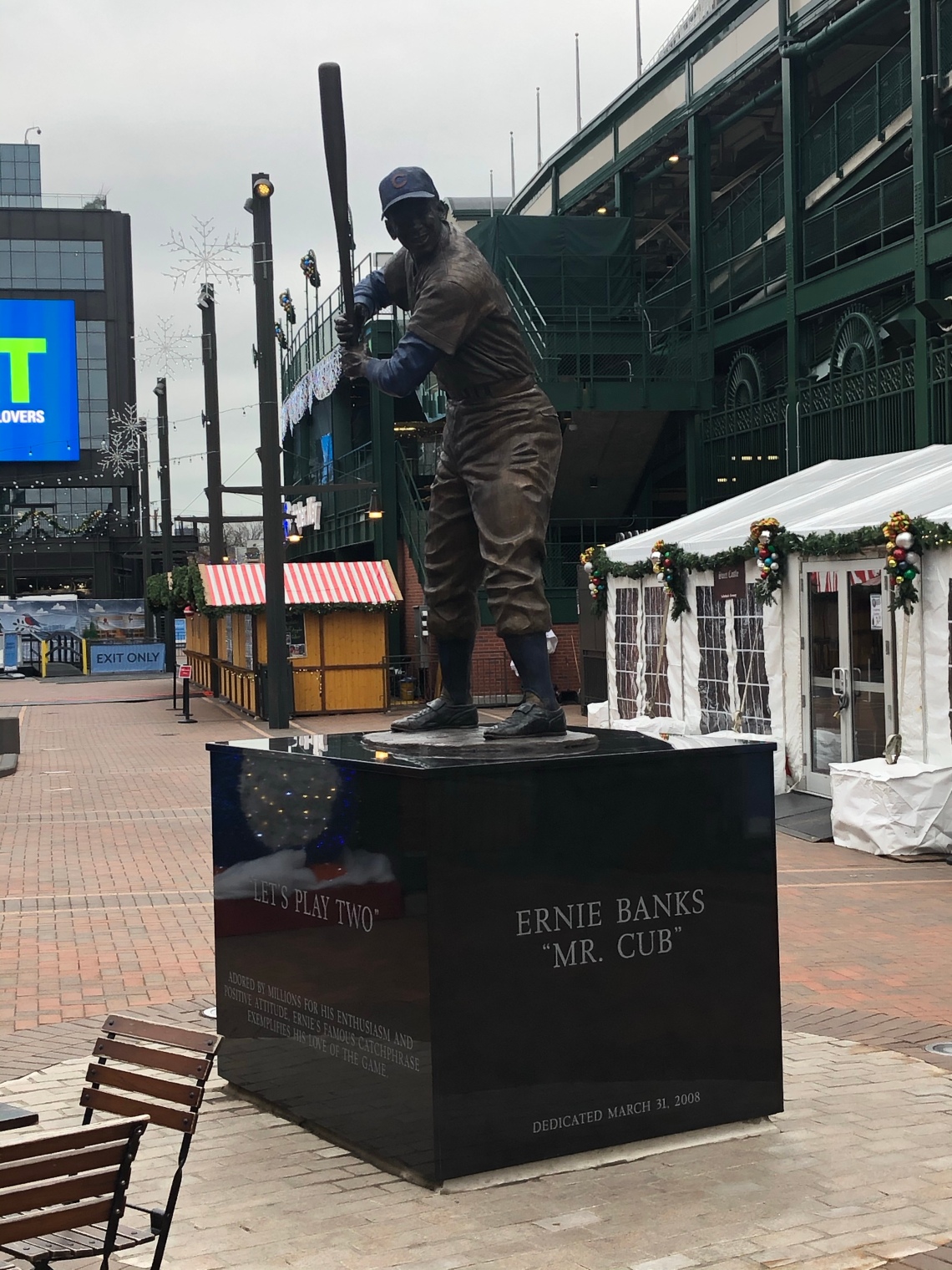 As I lifelong Cardinals fan, it felt like I was deep in enemy territory. Well, I suppose I was. Any deeper, and I’d have a seat inside, which I plan to next season. 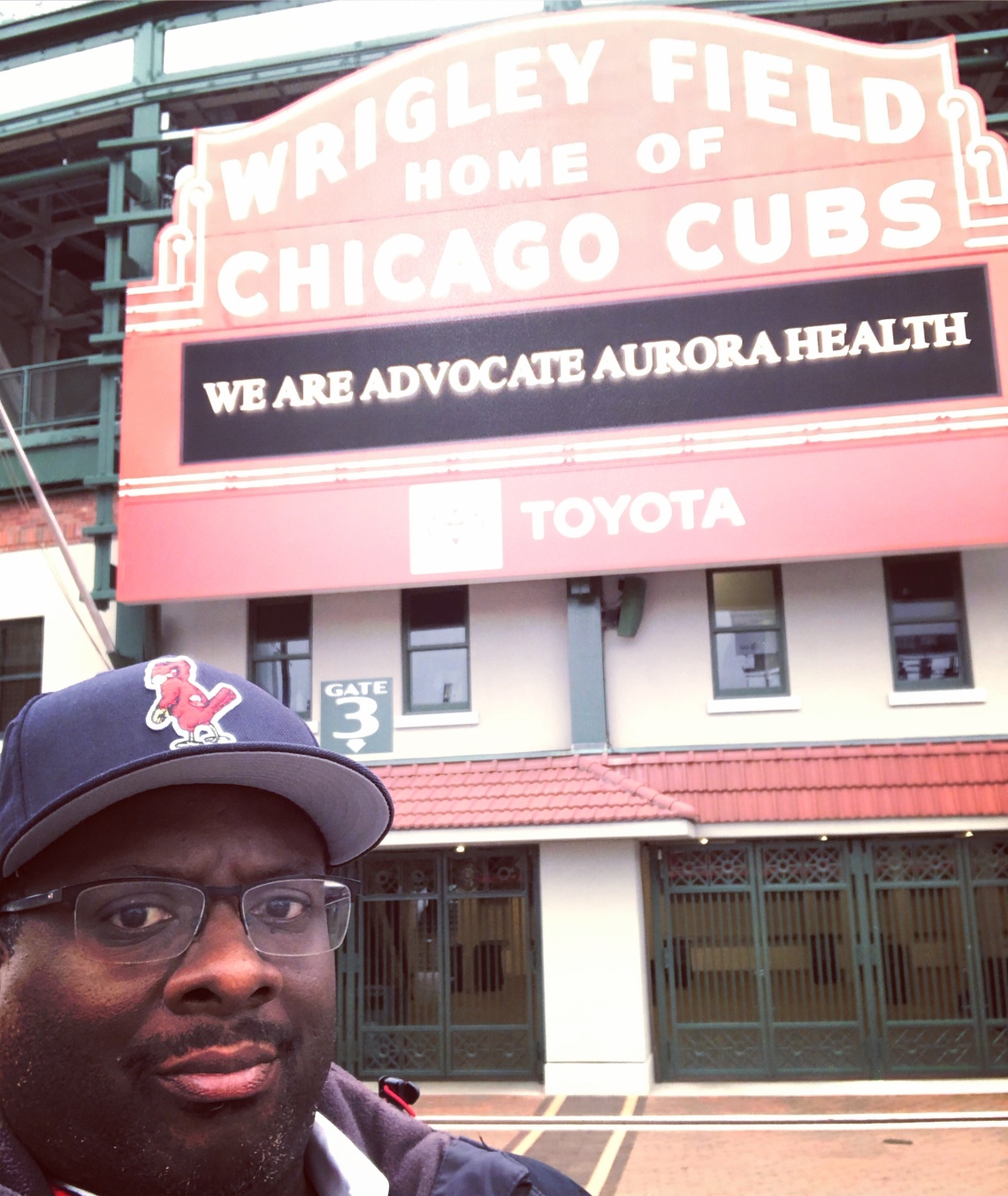 There’s a store across the street that sells authentic gear. I was hoping they would have Bears caps, because there was NO WAY on God’s green earth anything Cub-related was coming home with me! Sorry Cubs fans, that’s why it’s a rivalry.

When I went into the store and the clerk said hello, I returned the greeting and said, “The enemy is HERE!” He didn’t get it at first, but then he saw my cap, and we had a laugh. I lucked out and found a Bears cap I liked. Mine is not the smallest head on earth. He even gave me a little discount. 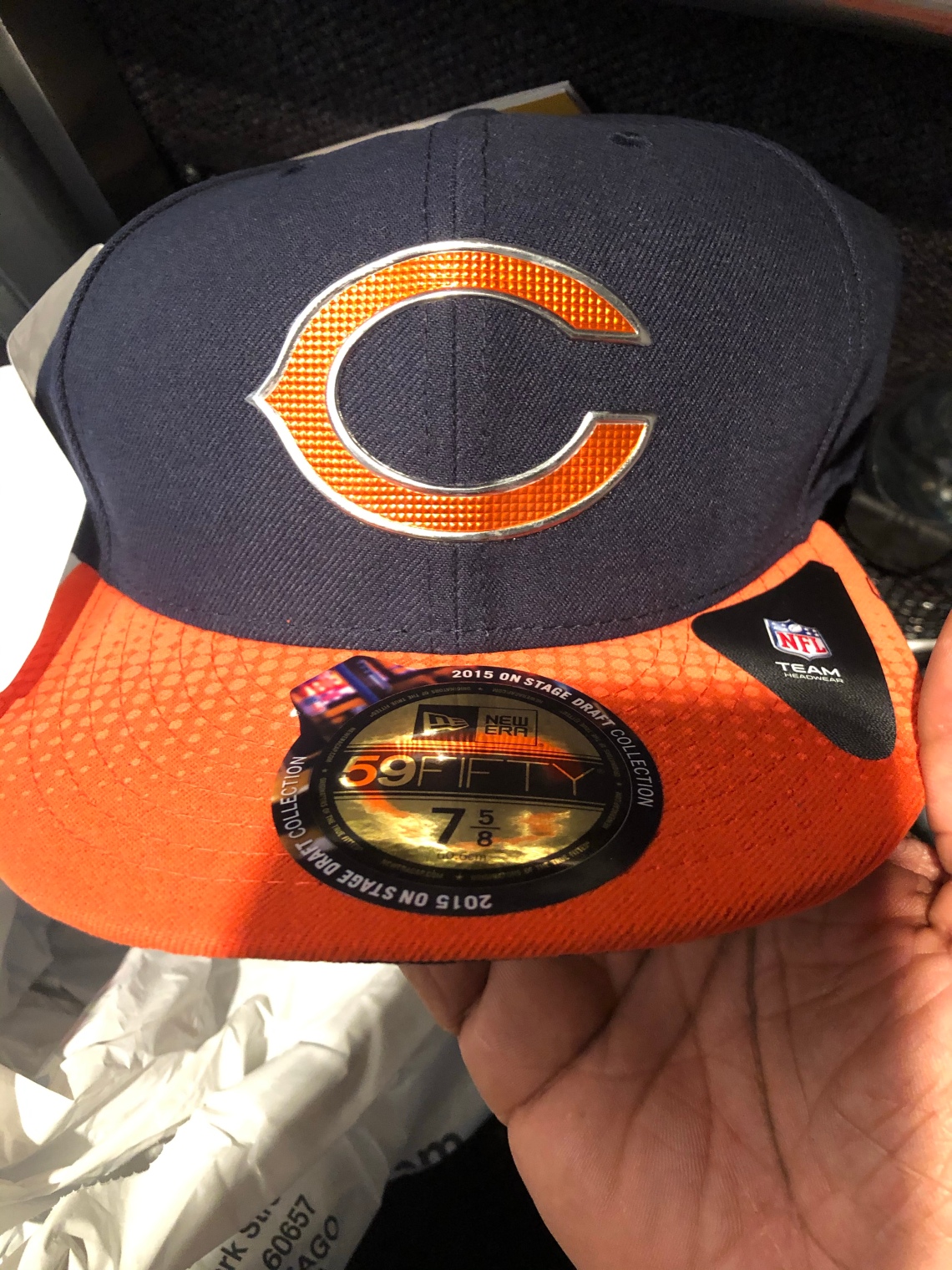 Of course, I couldn’t get out of the store without him shouting, “Go Cubs!” I told him I’d see him in April.

I’m gonna try to take a chunk out of Sid’s Crimson book on the way home. I’m a captive audience, so why not?

I don’t ask a lot of people. But basic courtesy is one of those things.

We were told in the station not to line up early to board our train. That’s fine. So we all kind of malingered nearby, waiting for the official word. It was clear where the unofficial line began, and where it ended. When we were told to line up, some hipster in a man-bun and his equally hipster girlfriend decided to come from absolutely nowhere to the front of the line! Seriously?

The Amtrak guide saw him, and instructed him to go to the back of the line. Instead, he stepped to the side, lingered, and then blended in with the rest of us as we walked to the train. The guide had her back to him, and didn’t see what happened at first. When she did notice him, she chose to say nothing. Neither did anyone else. It really annoyed me. Yet I knew speaking up and calling him out just might create a Thing right in the middle of Union Station. So I stewed on it quietly.

I’m not a violent man, but I wanted to snatch that stupid bun right out of his head.

I’m coming to the realization that I’m having a tougher and tougher time with metal, progressive or otherwise.

I’m talking really heavy metal here. Tool might be my outer edge, though I do love Haken and Leprous. The Pineapple Thief, Porcupine Tree, Double Duo Crimson … that’s “hard rock” to me. And I can handle it. Some of the stuff I’m asked to review steers toward Black Metal. I can’t get there.

The older I get, the more jazz means to me. I suppose I truly am becoming my father, more and more every day. Still, I don’t want to paint myself into a journalistic corner.

The most logical thing to do is take an album as it comes. Maybe it resonates with me. Maybe it doesn’t. I won’t know until I try. And I WILL try.

I’ve pretty much had to dive back into my “real life.” This is the first of three planned long days. Although my head remains at least partially in Chicago.

I have lots to do in my musical world, but most of it will have to wait until Sunday. Then I’ll have to deal with that whole “time v. energy” issue again. It’s not easy leading two lives.

Lord knows I get a lot more excited hearing about a new album or concert than I do going to yet another car accident or disturbance. But such is life these days, and priorities are what they are. Hopefully, this will all change soon enough.

How late do I plan on staying tonight? That remains to be seen. Working a near-double shift on my first day back doesn’t seem like the best idea, but the bills and road trips must be paid for.

I’ve gotten to the last part of Frank Zappa’s book, where he views from things musical to things political. This is where my interest starts to wane a bit.

To be clear, I’m fine with Frank or anyone else in the entertainment or sports industry (or any other walk of life, for that matter) having an opinion on the world around him. After all, they have to live with it, too. I just wish I could have learned more about the creation of albums like The Grand Wazoo, One Size Fits All, or Shut Up ‘n’ Play Your Guitar. But I guess that’s just the way it goes.

I’m actually working on three books at once. I’m also in the late stages of Nate Chinen’s Playing Changes, and I took Sid Smith’s In the Court of King Crimson to Chicago with me. Somewhere in there, I need to find the time to read all the articles I’ve saved over the past few weeks. There’s so much going on on the music world, it’s hard to keep up with it all. A nice problem to have, for sure. But problematic all the same.

Tired. It’s been a long week. Seven-day stretches are the worst. And I still have two more days after this one.

My extended shifts have left little time for music stuff. I’m working regular shifts up to my day off. My attempts to read once I get home usually turn into sleep. Goal for 2020: space out the long days, and budget my time better.

Teaching doesn’t allow me to pace myself the way I’d like to. That’s the way it goes. We roll with it, and we move forward.

It’s a gray day. Soon it will be gray and cold. Something to look forward to. Humph.