I didn’t sleep worth a hoot last night. Not sure why. I’m not any more stressed than usual. But there I was at 03:30, after sleeping about 3 hours, awake. Finally got around to sleeping a couple of hours later, but my morning was thrown off.

On the plus side, I’ve gotten quite a bit of writing done. Still need to transcribe one interview, and request a few others. But things are getting done.

I wish the same could be said for my condo search, but I’m working on it. Something will pop free sooner or later. I REFUSE to be denied. This is my quest, and I WILL complete it.

But for now, I can finally enjoy Joker.

It’s been a busy day. I ran a couple of errands, made my way to an appointment, and scouted out a potential new gym. Came home and got a little rest before burying myself in writing. But a couple more pieces are done, and my stockpile is slowly rebuilding. I even wrote a piece I only had sketched out yesterday in one fell swoop.

Before I forget, Joker is a remarkable movie. I was certain no one would be able to capture the essence of my favorite villain the way Heath Ledger did in The Dark Knight. Well, I was mistaken. Joaquin Phoenix absolutely nailed it. I will be very surprised if he doesn’t take an Oscar home next year. But stranger things have happened. Regardless, Joker is a fantastic movie.

It’s hard to believe we are just a day away from November. Which also means I’m staring at another birthday. My days of counting down to my Special Day are behind next me. Now it’s more like, “I’ve still got a couple of weeks. Wait … it’s next week? Damn!” Well, I suppose it beats the alternative.

The sun has finally made an appearance, helping make it warmer than yesterday, when it felt more like January than October.

Fascinating bit of music I’m hearing via Bandcamp today. Casualties of Jazz is the band. Hammond organ, acoustic bass, and drums. The odd thing is they’re covering Black Sabbath. It is really good. I’m hoping it’s not just a novelty in my mind.

Retirement is getting closer. I feel it more each day. But for a couple of hours last week, I quit my job.

It all stemmed from an ignorant woman not understanding why I blocked her one-way street while dealing with a possible car thief. I’m a diplomatic guy, but this registered nurse (she couldn’t wait to tell me that) kept barking at me about how to do my job. Then she had to throw in, “You wouldn’t be blocking the street in a WHITE neighborhood!”

I didn’t scream at her, but I came close. She was very unhappy about being scolded, and I didn’t give a damn. When the dust settled and the call was handled, I started saying to myself, “To hell with this! I don’t need this aggravation! I’m retiring early! I’ll make it work! I QUIT!”

I get thanked for my service twice a day, minimum. And all it took was this ONE ignorant woman to send me over the edge. I never take this stuff personally, but it really stuck in my craw this time. Enough was enough!

But after a couple of hours I realized the basic truth: I may not need the aggravation, but I DO need the paycheck. So the next morning, I reported for roll call.

This is what being on the verge of change will do to you.

My piece on allowing progressive rock to make progress got a lot more attention than I thought it would. The comments were overwhelmingly positive, highlighted by keyboardist Adam Holzman (Steven Wilson, Miles Davis) commenting, “Good points.” First of all, I had NO idea he read my stuff. Secondly, it helped me to feel quite validated. It’s possible I geeked out for awhile over that moment.

I didn’t expect that post to garner much attention. But it seems to have gotten legs and found its way to more than a few timelines. Only my posts on King Crimson and Tool have done better. Go figure. One thing is certain: I have NO idea what will get my readers to engage.

These diary posts … I don’t expect much readership from them. To be honest, the diaries are more for me, to track where things are headed and sometimes to vent little. It’s a nice outlet.

Grooving to the guitar chops of Jan Akkerman. He’s been around for decades. Shame on me for not hearing him sooner.

My afternoon schedule has been involuntarily re-written. It’s annoying, but that’s the way it goes. What did John Lennon day? “Life is what happens when you’re busy making other plans.” Sounds about right.

I never appreciate returning to Standard Time more than when I’m on the day watch. That extra hour of sleep is HUGE, especially when I worked overtime the night before. More overtime is planned for tonight, but we switch to the afternoon watch tomorrow. So I should be able to get some sleep.

I’m really looking forward to meeting this author. I have so many questions.

I’m just driving down the street, on my way to assist on a call. My driver side window is down. Unseen by me, a bee flies in lands on my head, and for no apparent reason, STINGS me. Damn, that hurt! Right in the center, about an inch or so back from my hairline. If ever there was a time I wish I had a big Afro …

To make matters worse, I did nothing to provoke this attack. Nothing! One second, I’m driving. The next, I’m in pain. I can actually feel the sting behind my eyes. It’s ridiculous. I was planning to stay late tonight, but I actually have a bit of a headache now. So I’m giving it a little longer, and then I’ll decide.

I wanted to yell at the bee, “What did I ever do to you? I was minding my own business!” Alas, the bee has no doubt died by now, and my question will never be answered.

That was a new one.

A woman asked me to chase off some college students taking photos around an abandoned building. I never did find them, but I saw a couple of interesting photo opportunities of my own. It’s funny what catches your eye. 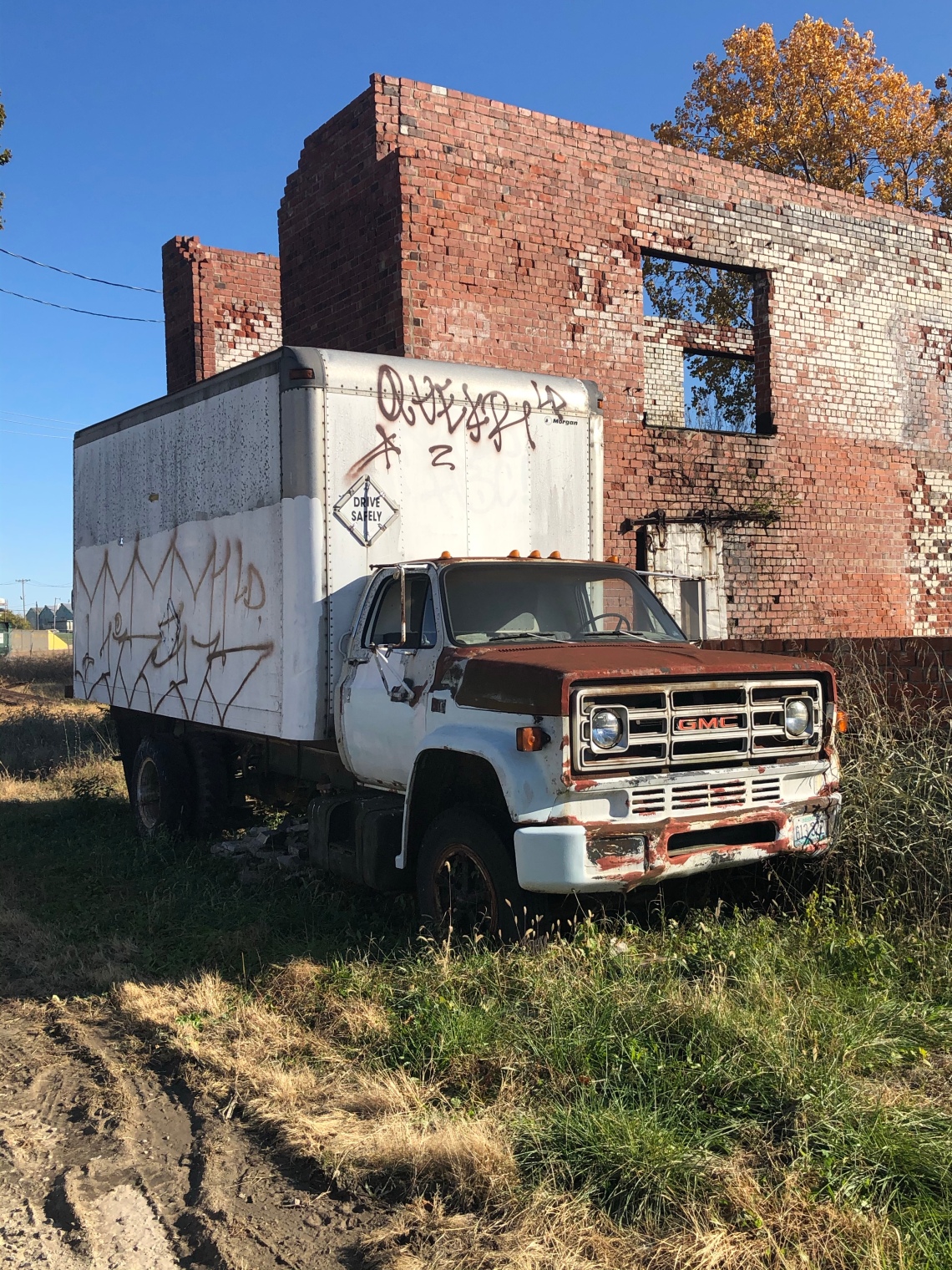 It’s been a fascinating day of musical discovery. I’ve played parts of at least 15 albums, thanks to YouTube. Some of these acts will be getting my money very soon. Cellist Tomeka Reid appears to be the front-runner at the moment.

There have been some other interesting entries as well. My ratings system has been getting quite the workout so far.

Music is the ultimate adventure. I never know where it will take me, and that is a very good thing indeed.