Sooner or later, particularly in the field of jazz, a musician is expected to find his own voice. Be it singing or playing an instrument, the best jazz musicians eventually break free of their influences and find a sound that is them, and no one else. Louis Armstrong, Clark Terry, and Miles Davis had their own sound. As did John Coltrane, Jaco Pastorius, and Wes Montgomery. Using the flugabone (a compressed valve trombone) as his instrument, David Dominique has created a voice of his own.

The Richmond, Virginia native is using his voice not only to display his own instrument, but in his remarkable compositions, as well. While still paying homage to the past greats, Dominique has also incorporated more modern sounds to help him bring forth two fascinating albums in Ritual (released in 2013) and, most recently, Mask (2018). While the former seems to aim to make the abstract sound more accessible, the latter brings the feel of an old-school big band being augmented with modern-day electronics along with unexpected rock and contemporary classical elements. The records have been widely praised by critics the world over.

Even the ensemble Dominique has written for is a bit out of the ordinary, consisting of himself, saxophones, flute, violin, viola, clarinet, bass clarinet, electric guitar, electronics, bass and drums. The resulting sound helps put Dominique on the cutting edge of the FutureJazz movement, which pays respectful homage to past artists like Charles Mingus and Eric Dolphy, while bravely blazing a musical path for what’s to come.

Dominique has also composed music for theater works and numerous large and small ensembles. His music has been heard in numerous venues throughout the United States, as well as in France and Germany. He holds degrees from New York University, California State University, Northridge, and Brandeis University. At the College of William and Mary in Virgina, is an Assistant Professor of Music.

CirdecSongs: Yours is a rather unusual choice for a lead instrument. What led you to playing the flugabone, and how does it affect your compositions?

David Dominique: I grew up playing trumpet and then baritone horn—valve instruments—so valve positions are hardwired into my brain. By high school I switched to playing slide trombone in jazz, rock and ska bands, but I always had valves on the brain. So now I just do what feels right, and the punchy sound of a flugabone works well in this music.

Your sound seems to come from an eclectic array of music such as big band, hip-hop, and rock for starters. Who do you claim as your biggest influences, and how much of what they did makes it into your music?

My influences are all over the place. I like music that shows me new possibilities but I rarely reference a specific band or artist on Mask. I try to let my interests interact as subconsciously as possible. Lately I’ve been listening to a lot of electronic music and experimenting with modular synthesis. I don’t have much electronic music recorded and available (yet! stay tuned…), but I’ve been into it for a while. Almost 20 years ago when I was at NYU I fell in love with the Buchla modular synthesizer and was listening to old school abstract electronic music like Subotnik, Xenakis, new and old musique concrete. I just didn’t have enough time on the Buchla to go deep. I made a lot of sample-based music back then but never released it. So I’m really just coming back around to earlier interests. There are so many artists making cool electronic music right now that I hesitate to attempt a shortlist, but the most recent plays in my Spotify are Eartheater, Yves Tumor, Dean Blunt, Metro Skim, Robert Aiki Aubrey Lowe, Pangaea, Iglew, Jon Bap, Sophie, Aphex Twin, Frank Ocean, and Shabazz Palaces.

The last couple of generations of jazz musicians have been adding more modern sounds to their bands, often incorporating electronic elements. How do you convince more “traditionalist” jazz musicians to embrace your sound?

My last answer was kind of long, so I’ll just say I don’t really try to convince anyone of anything!

Your fellow bandmates are clearly in sync with your needs as a composer. What do you look for when seeking out a musician for your band?

I like to work with friends and musicians I admire. The musicians on Ritual and Mask are all composers and are totally omnivorous in terms of their individual tastes. Luckily there’s no gap in communicating my intentions to this group.

The music on Mask seems to be tightly composed. How much, if any, room for improvisation do you leave in your compositions?

On Mask there are a few individual solos sprinkled throughout — particularly those of guitarist Alexander Noice, multi-reed players Joe Santa Maria and Brian Walsh, and violist Lauren Baba — but the forms are almost entirely pre-decided. I think of improvisation as just another tool of expression and layer of structure. Like any other tool or device, solos made sense in the context of some compositions, and other times weren’t a big part of the plan.

What is the most important thing your listeners can get out of your music?

Hmmm … that there are no rules to music, maybe? That sounds so pretentious … or maybe it sounds vacuous and obvious … I don’t know… I’m sorry!

I’d like to have been in Can in the early-mid 70s, or Kraftwerk … or THE RESIDENTS … or Sonic Youth in the mid-late 80s. Or Digable Planets as a synthesist/sampler player in the ’90s. Or Stereolab as a keyboard player in the ’90s. Or Sly and the Family Stone playing trombone or keyboard in the ’60s. I’d love to be in Shabazz Palaces’ touring band or Mount Eerie’s touring band when he uses one …Or or or or … 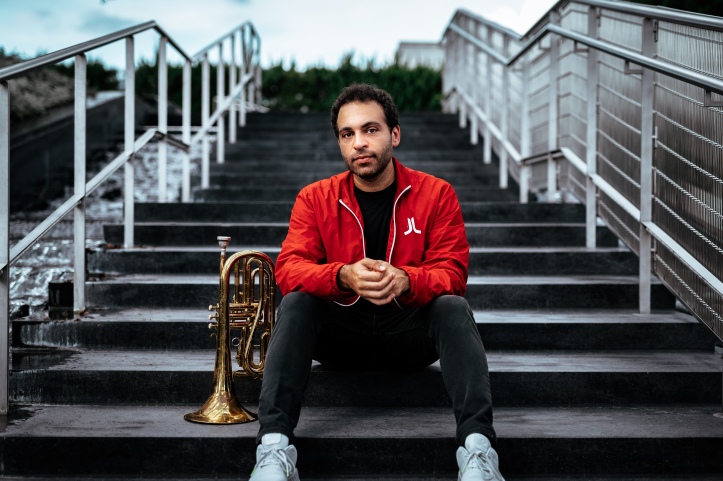