If there is one thing in the world I hate, it’s dealing with drunk drivers. Naturally, that’s precisely how I spent my watch. Some people have no respect for the sanctity of Jazz Sunday.

To add insult to injury, my evening shift tonight will be followed by a day tour tomorrow, as it is time to rotate. Rest assured, I will hunt down the person who created this schedule.

I guess the pile of jazz I had ready to go will have to wait until tomorrow. Only two tracks worth of Branford Marsalis were heard today.

Spring has returned. I’d like to think it’s for good. But there’s also more rain coming, so I’m not putting away the long-sleeved uniform shirts just yet.

Short-change is usually exhausting. I am tired, but since my trainee and I never left the station today (damned DWI paperwork), the day wasn’t quite as stressful. Tomorrow is our Friday. Rejoice!

Not that I have any rest coming. My other world beckons. There is still my interview with Andre to transcribe, and my next two major interviews have been mailed down and require research. I’m also kicking off a series of shorter, email driven interviews. I just emailed the first one. Two more albums await review, on top of the existing pile. And I’m celebrating Jazz Sunday a day late.

One of my interview requests politely declined. Truth be told, I was relieved. We have talked before. And while the experience was wonderful, I don’t really want to wander the same terrain twice. So I’m good with not doing it.

One of the major keys for the immediate future is marketing. I’ve got to work harder at getting my proverbial brand out there. My publisher warned me that marketing would be ten times tougher than writing the book. She may have low-balled it.

Building, developing, and expanding a brand. These are ways I would never think of myself. But here we are. These very words are part of that construction.

The Big Change is scheduled for 13 months from now. And in many ways, the world has begun to shift in that direction. Contacts are being made. The necessary resources are revealing themselves. The desire to move on grows exponentially. I’m not where I want to be. But I’m definitely waking in the right direction. Destiny could very well be right. Over. There. Time will tell.

It’s the “weekend” from my main job. Now it’s time to go into overdrive toward the future.

Today’s priorities include organizing “The Brand” by giving it a more cohesive definition and path, establishing a routine (with built-in room for error), and pushing toward the vision. Then it’s on to Courtney Swain, and my review of her brilliant album. More listening for reviews follows that, and then transcribing the Cholmondeley interview. The biggest key will be leaving the TV off while I dig in.

But first, a quick appointment.

Three short interviews have been emailed, one in-depth interview is being scheduled, and a review has been written. What’s more, Facebook has finally come to its senses and allowed me to change my music page name to CirdecSongs. I’m gonna call this a productive day.

There is still the matter of transcribing Andre’s interview. That will be tomorrow’s task. I’ve done fairly well for a man that prefers to do nothing on his first day off.

I’ve also had a personal revelation: I still need to let go of some things, mostly mentally. I need to get to the root of my true self. This will not only aid in letting go, but it will take me a long way toward where I want to be. How’s that for philosophical?

The Cardinals are winning. The Blues are playing. And Markus Reuter’s Heartland, a string quartet suite, is vibrating my eardrums.

Twenty-four years ago today, I received my badge. I can still see most of that day like yesterday. More than anything, I remember the way my hand shook lightly as I went to take a look at that which I spent four months-plus earning.

Now I just marvel at the passage of time. Twenty-four years. How did that happen?

On my Facebook page, I declared, “Twenty-four years down. One to go.” This is yet another statement of my intent, and the desire to move on to Chapter Two.

Today has been a day of fortuitous timing. I spent less than five minutes at City Hall; I wandered into my barber shop just in time to sit in the chair; it almost seemed as though my car mechanic was waiting for me; and I spent less than five minutes at the DMV after spinning my wheels last week. I can only hope to continue this trend when I go to pick up my daughter from school.

The worm took a nice turn yesterday as well, when I learned that I had been accepted as a contributor to All About Jazz, an online magazine. I also scored an unexpected interview, which I had all of 15 or so hours to prepare for. But things worked out, and the interview is complete. I’ve also sent out three email interviews, which will come back to me sooner or later.

I’m planning to spend some time listening and taking notes this evening. Time will tell what actually happens.

The day began with an early morning road trip to the State Capital, where I took place in the annual Law Enforcement Memorial tribute. It seemed an appropriate way to begin my 25th (and probably final) year on the job.

I took the trip with three cohorts, including my young trainee. It’s a somber ceremony, but the drive makes for good bonding time.

I know how fortunate I have been to have my career last this long, when so many others didn’t make it. That is something I won’t forget.

Home again, where I’ve taken a dive into the MoonJune Records pile in order to hear more treats from Leonardo.

Drummer Xavi Reija has my attention right now. His album Resolution is proving fascinating indeed. A nice blend of Prog and fusion, definitely geared toward musicians.

Enjoying a quick breather before diving back in to Chapter 2 life. I was fortunate enough to enjoy yet another baseball game last night. Thanks to a friend and our police foundation, the seats were even better this time. I’m getting spoiled.

And the Cardinals broke their losing streak. I’d like to think they could thank me for that. I’m 2-0 this year.

Better still, I noticed these packages on my way out the door last night. It feels like I’ve been waiting for them forever. Come to think of it, I believe I have. I can understand overseas packages taking a couple of extra days, but this was getting ridiculous. 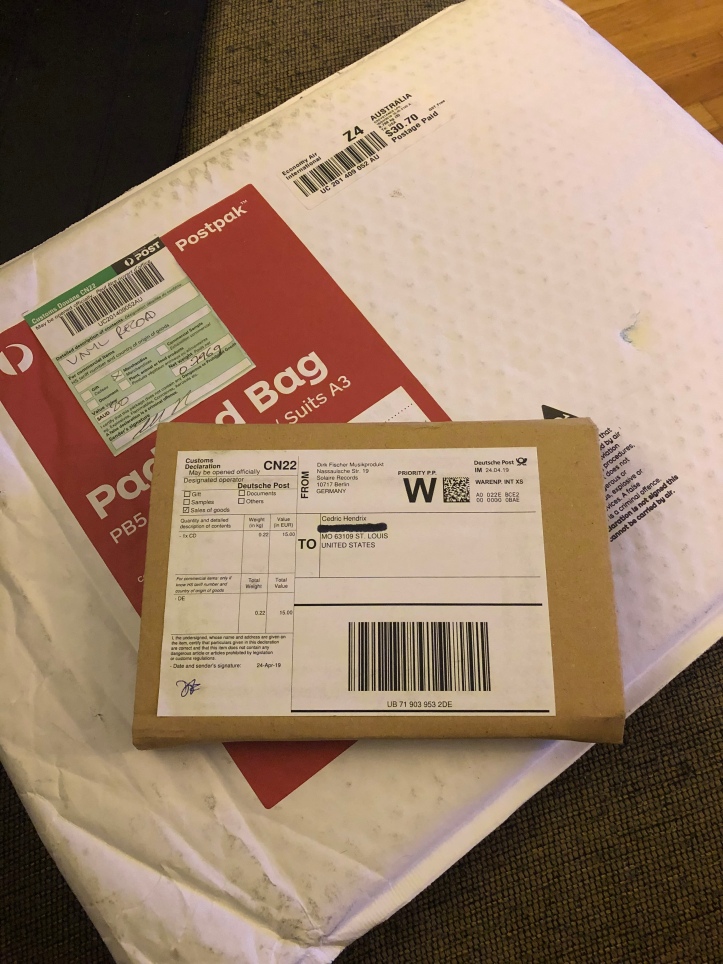 From Germany comes Heartland, a string quartet suite composed my Markus Reuter. This may be my toughest review. The music is awesome, but writing about classical music is not my strong suit. What I will say up front is the music is nothing short of incredible.

Equally exciting is the package I got from Australia. I’ve had a moderate obsession with We Lost the Sea, and their album Departure Songs. It is easily my favorite album of 2015, and my second favorite of the decade. Well, here it is being played live in Belgium, on vinyl. I don’t care if it’s just for completists. I wanted it! And I’m always happy to support the bands I love. 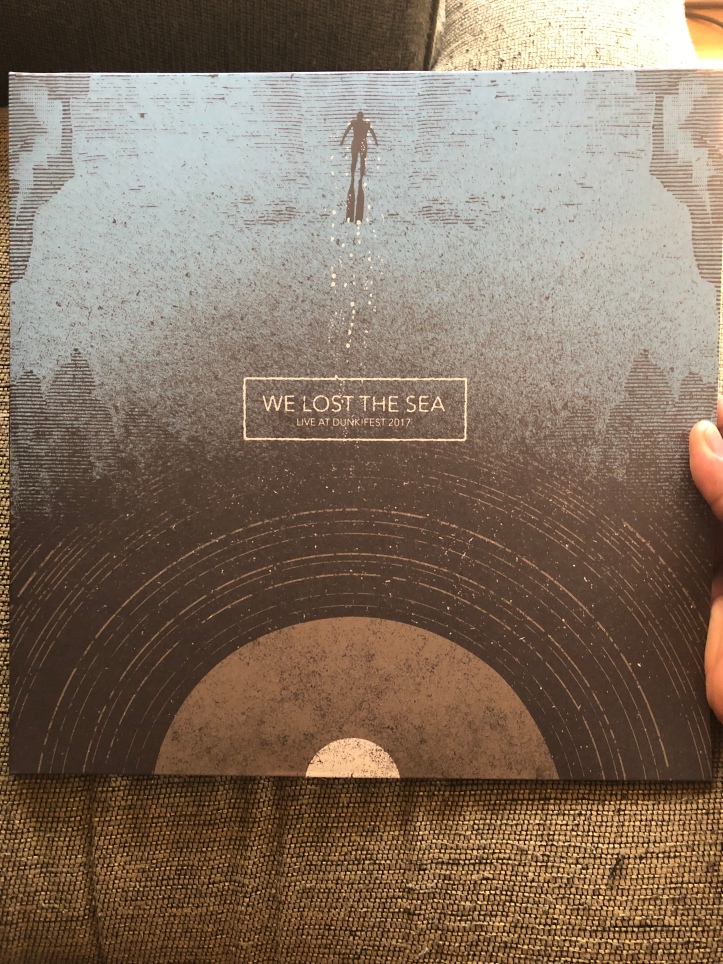