For a day off used to rest, today will be a study in perpetual motion. The uniform is back on for a bit of overtime, followed by a visit to Planet Score for Record Store Day, a brief rest, the Brad Mehldau show, and then picking up my daughter from work. I guess I’ll sleep tomorrow.

Let’s face facts: social media can turn you into a raging egotist. I’m no exception. Since posting my last blog, I’ve been bracing myself for a fight that has not come. Not to say it won’t, but it wouldn’t hurt to chill out over it for a bit. What happens, happens. Even if it’s nothing.

Post-rock dominates my musical thoughts. So I’ll be hearing from Old Solar, Tortoise, Sigur Ros, and This Will Destroy You today.

Morning multi-tasking. The Masters is on TV, starting early due to oncoming bad weather. It’s nice to see Tiger Woods in the final group, contending for the title. I’m sure CBS is thrilled. Their ratings should go through the roof!

Overtime shift aside, yesterday was highly musical. Perhaps one of my most musical days, ever, not including spending the day at a festival. It started when my landlord texted me out of the blue, saying there was a large, heavy box sitting in the vestibule, waiting for me. I was expecting a couple of packages, but I wasn’t looking for this: 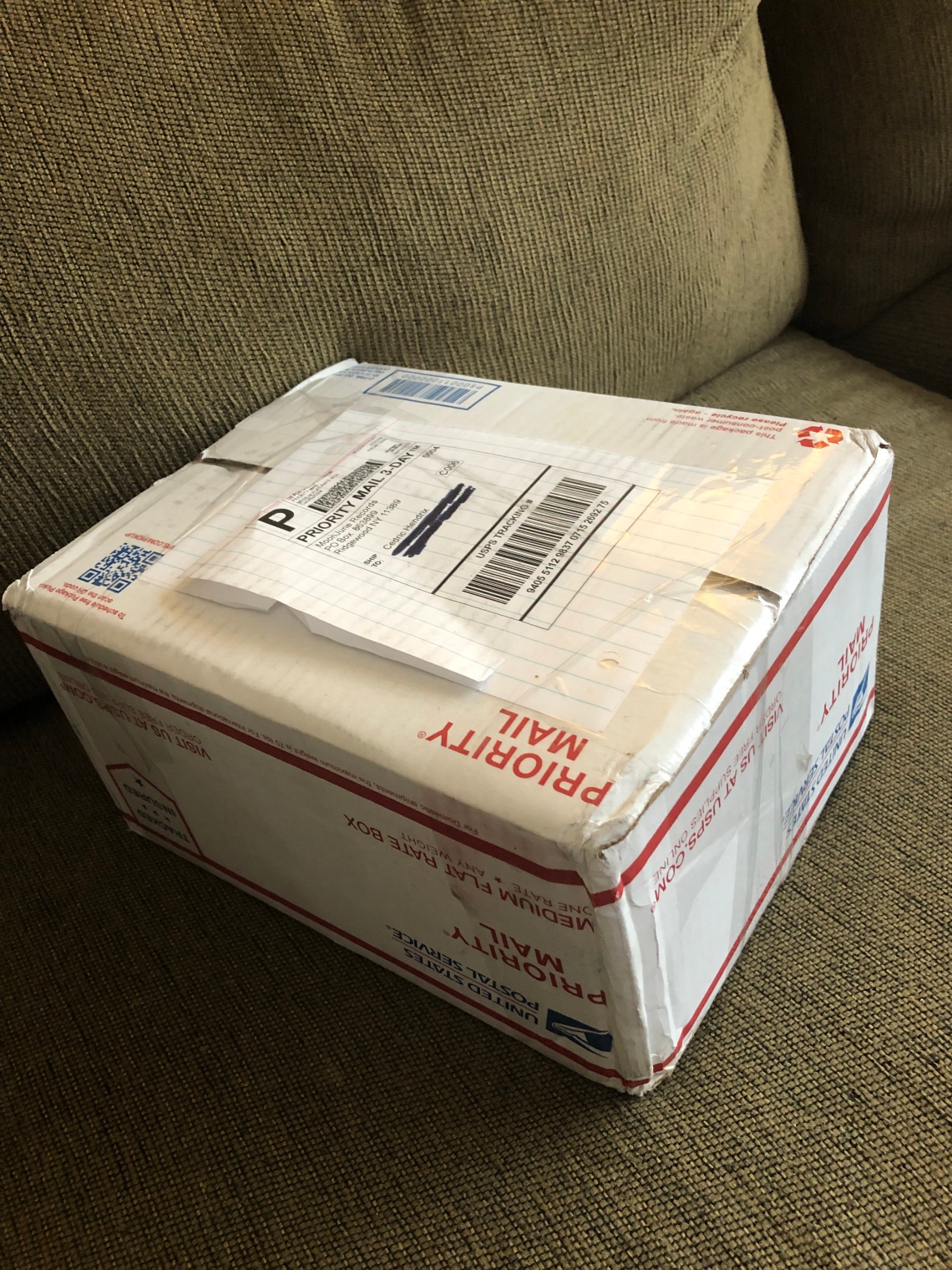 It was from MoonJune Records. Leonardo Pavkovic and I have traded emails. He was pleased with the interview I did with Markus. He told me he was going to send me “a bunch of CDs.” Great, I figured. I’d have six, eight, maybe 10 new records to check out. I expected a large padded envelope, not a box!

I was even more surprised when I opened the box: 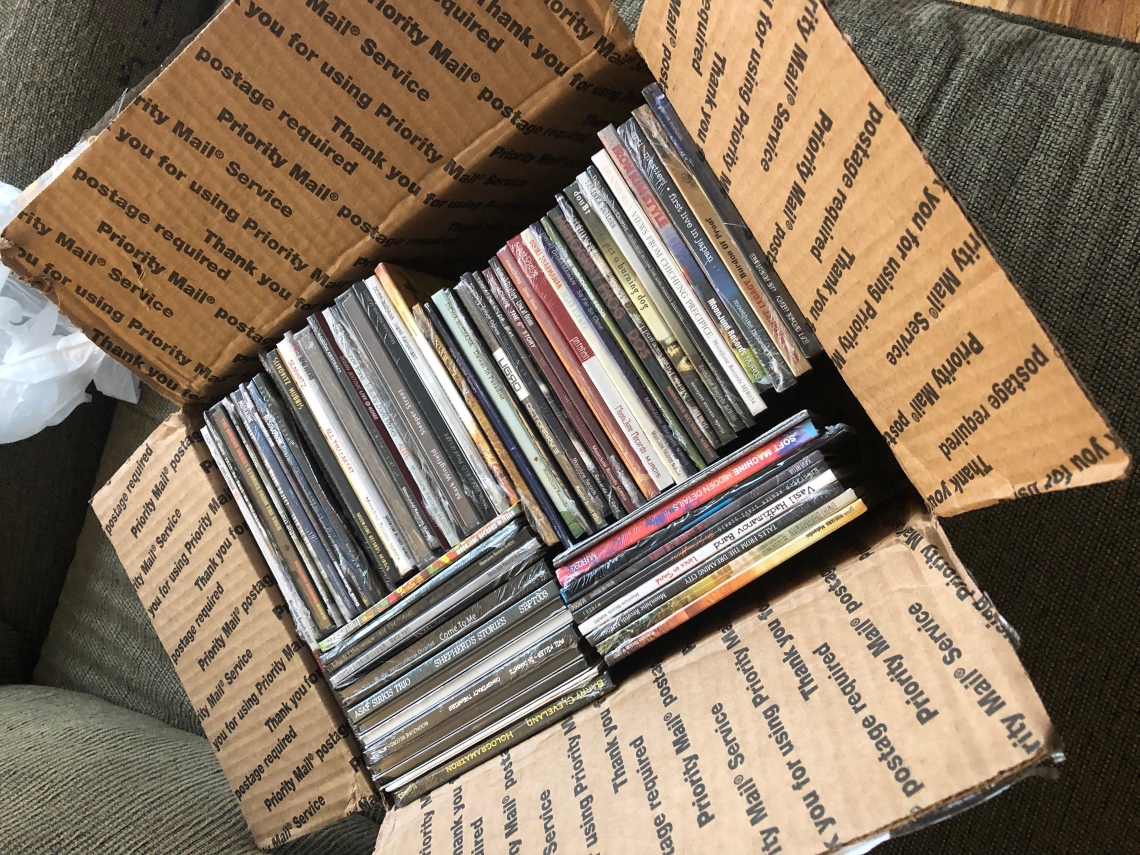 Almost 70 CDs were inside, dating back to 2007. Essentially, I was getting a full MoonJune Records retrospective, including some new material ripe for reviewing. Guess my next few weeks are mapped out.

From there it was off to Planet Score for Record Store Day. The place was quite packed when I got there, which was relatively late. My pal Joe Stulce saw me come in, and is always happy to greet me. 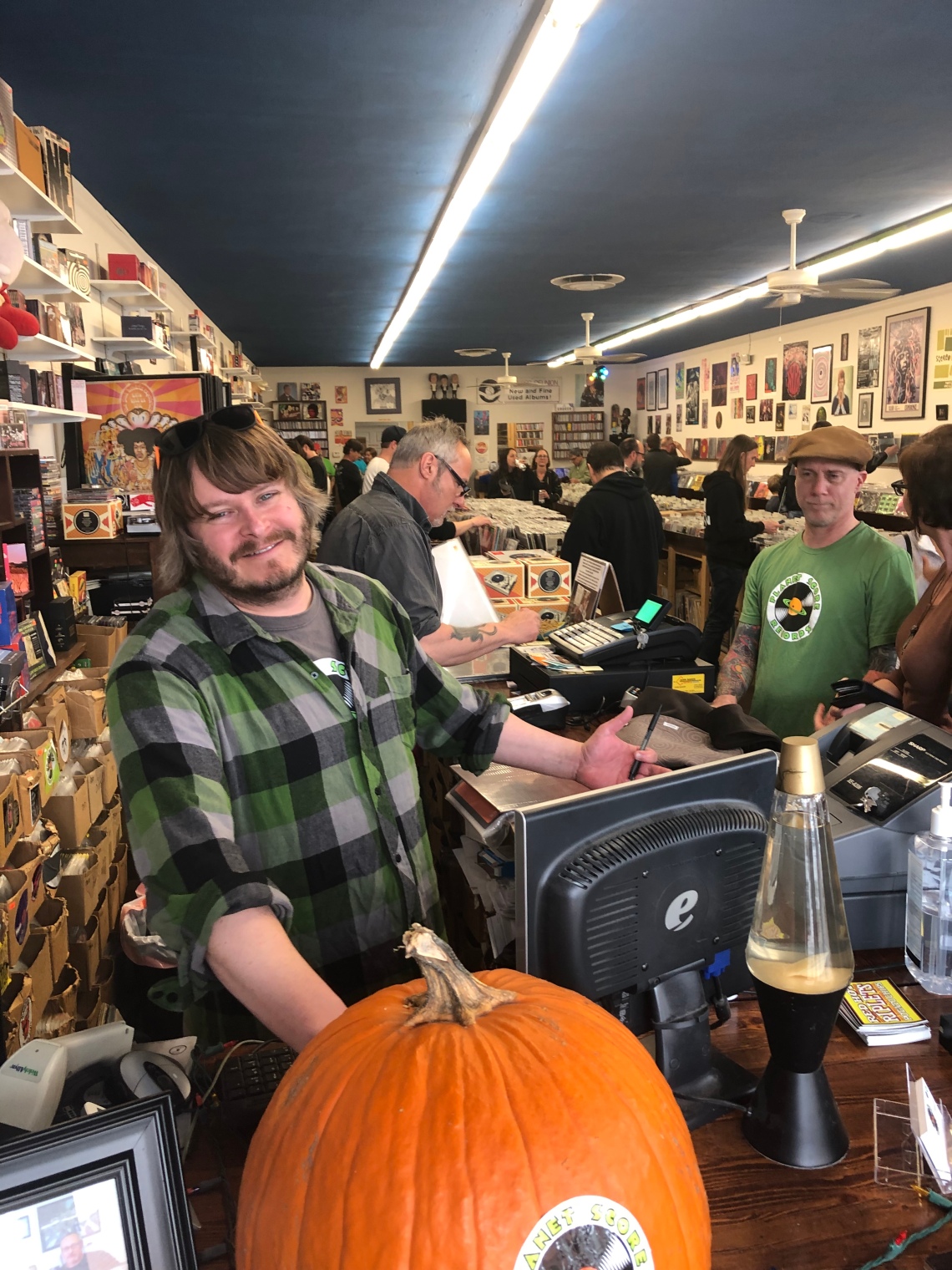 Joe told me that things were relatively slow compared to the morning rush. We have a running joke that all my special orders are paying for a retirement boat for him and Tim, who co-owns the store. Joe said to me, “The boat is paid for!” as we looked around the store. I couldn’t be happier for them. It would be nice to see a crowd like that more often.

My purchases were relatively light, due to budget constraints. Plus, I wasn’t really looking for anything in particular. I walked out with two discs that were already waiting for me, and Yes’s debut album, prepared specifically for the occasion. 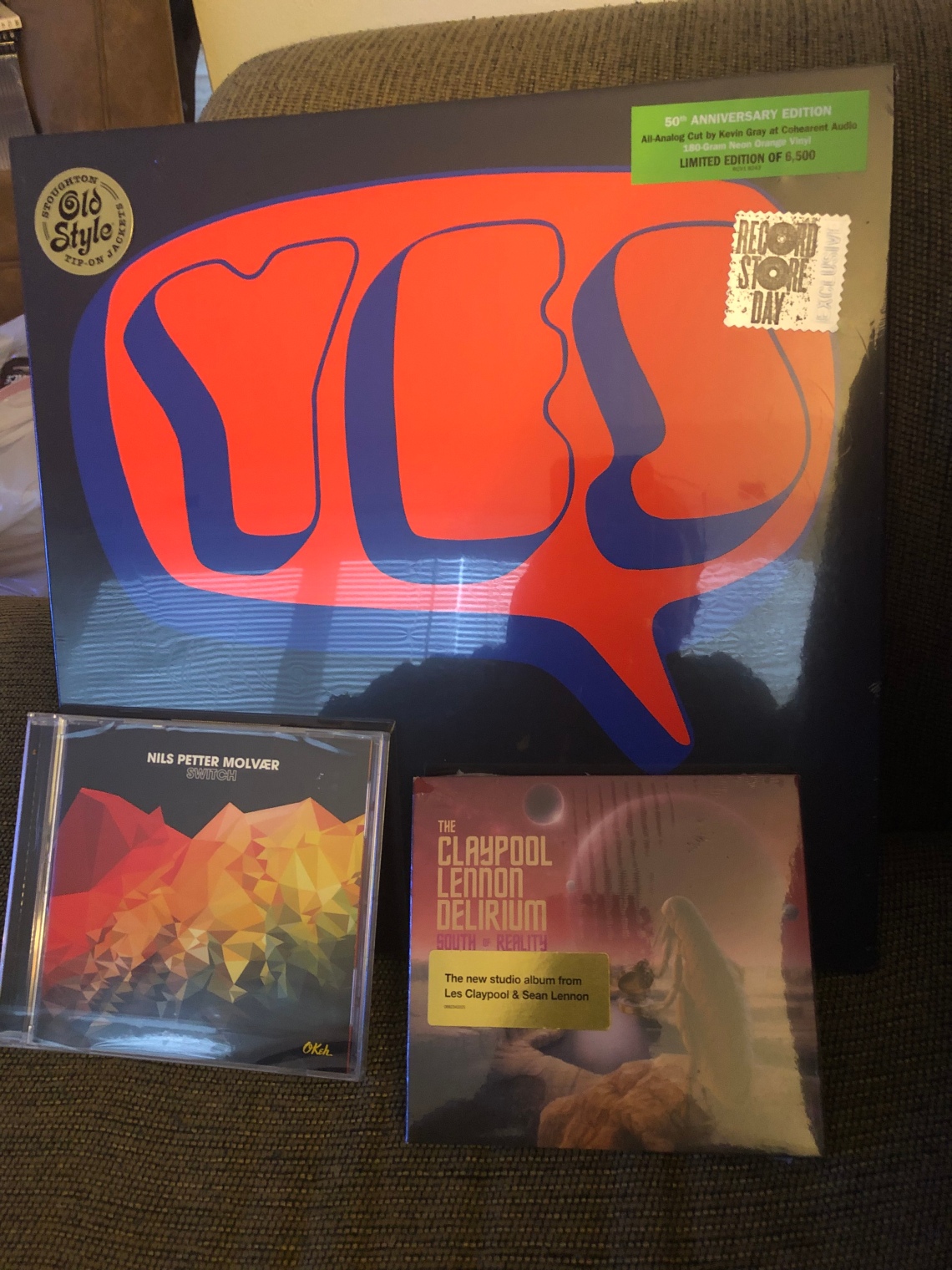 Later in the evening, I made my way to Jazz St. Louis for Brad Mehldau’s second set. It was a “no photos” gig, so the best I can do is show where I sat, which was ten feet from the man. 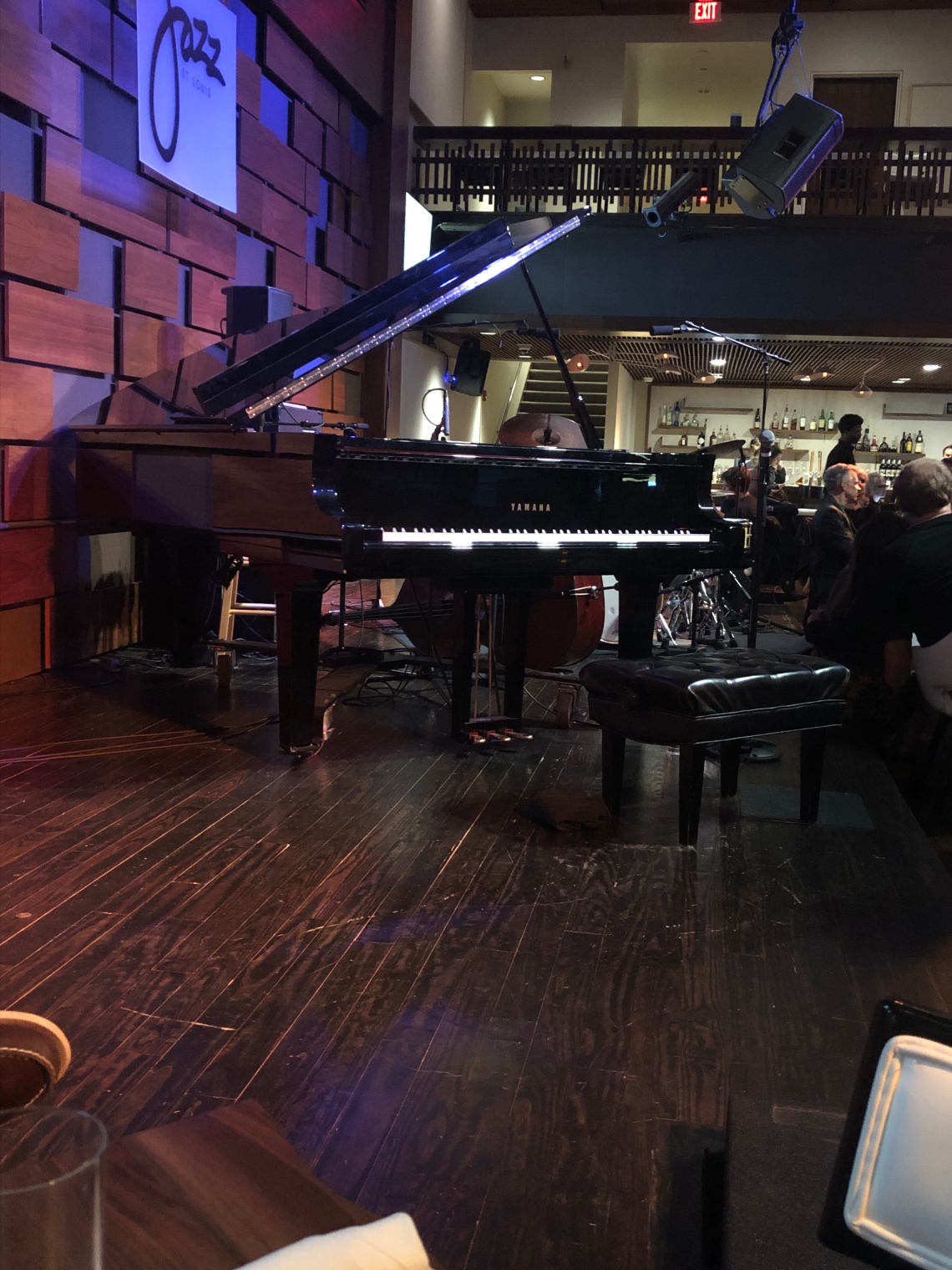 Mehldau and his band (Larry Grenadier on bass and Jeff Ballard on drums) were sensational. Mehldau played with the touch of Bill Evans, the chord comping of Thelonius Monk, and the bouncy single-notes of Dave Brubeck. They even did a great take on The Beatles, which I’m always leery of when a song is announced. In this case, it was “And I Love Her.” Here’s a Mehldau solo version.

I got to chat with him briefly after the show. There just might be a quick interview in our future.

I’m scheduled to meet friends there this evening, more to be social than for the music. That’s why we’ll be in the bar instead of the club. But I’ll be able to see and hear him via television monitor. I hope my friends don’t mind my constant peeking.

I’ll take some time this morning to make preparations for a future big interview. At some point today, I’ll find some time to relax. It is my day off, after all.

My first day off is usually a “nothing” day, where I just lie about, watch movies, and recharge my batteries. I was too busy on Saturday to have that day. So in spite of plans to the contrary, yesterday wound up being that day. I watched Tiger win The Masters (which brought me to tears when he embraced his children), then spent the afternoon napping in between whatever was on TV. I spent the day in that zone between annoyed and grateful.

I have an afternoon appointment, followed by an errand or two. Mostly, I’ll be listening. It would appear that I have a LOT of music to go through.

Errand run, dinner consumed. The Cardinals are on TV, but the sound is off. Instead, the delightful weirdness that is The Claypool/Lennon Delirium thrums away through my speakers. Their show is but a week away, and I’m eager to see this combo in person. 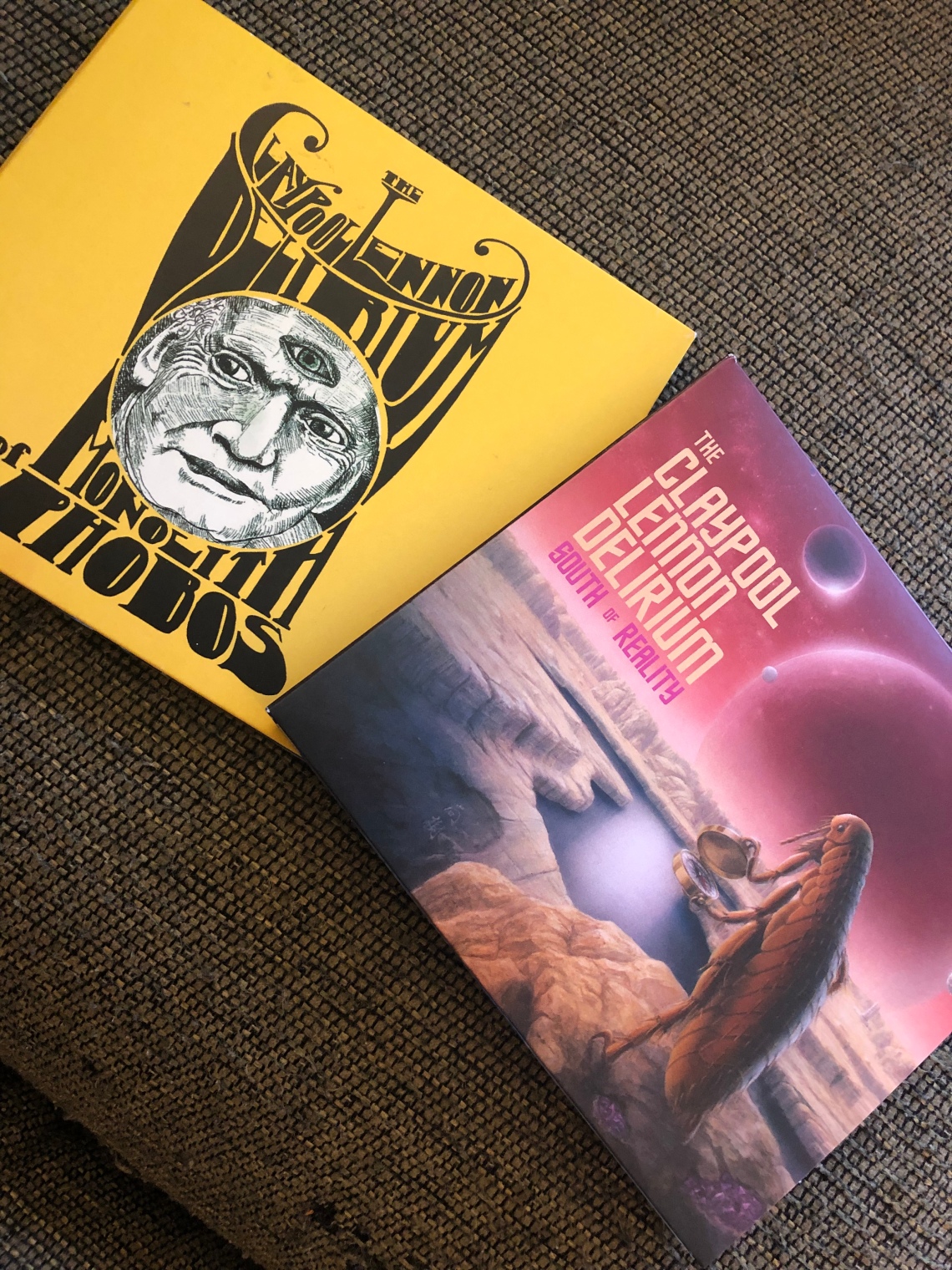 A friend asked me an interesting question today. We were talking about my ambitions relative to my life’s planned next chapter. My goals are somewhat ambitious, but completely within reason. “So what would hold you back?” my friend asked. It was an intriguing question.

My dad used to say obstacles were what you see when you take your eyes off your objective. Dad could be a deep thinker. I’ve already pushed aside a couple of potential distractions. But I think my friend wanted me to think deeper. I’ll contemplate this for awhile.

Rolling Stone published another piece on Robert Fripp and King Crimson. It stuns me to see just how much coverage that site is given to Crimson, given the marked lack of such in years past.

In this piece, Fripp seemed to walk back his “prima donna” line from the press conference by about half a step or so. At lest be admitted to being one of said characters. He also admitted to eliminating the frontman position (as I theorized), and that being the reason Adrian Belew wasn’t asked to join, since being the frontman “is what (Belew) does.” I can’t argue with that. Had he said that in the first place, I’d be much less upset with Fripp. Of course, that Crimson ProjeKct shot is still hanging out there.

One step at a time, I guess.

When I woke up yesterday, temperatures were in the high thirties. Today, we pushed 80. Welcome to Missouri. If you don’t like the weather, wait 15 minutes.

Personally, I’ve been over winter since January. It’s good to go to work not layered and bundled to the point of immobility. Hopefully, short sleeve weather is here to stay.

My thoughts have been mostly macro today. Where am I trying to go? When do I want to get there? How do I go about doing it? What makes me truly happy?

The quickest answer starts with moving on from my day job. That’s the key. From there, it’s like dominoes. What can stop me? That question continues to linger. So far, I can’t come up with anything that can’t be beaten with a little confidence and self-determination. Sometimes, that’s asking a lot. But I want this like nothing else in recent memory. That helps.

The next big interview is Thursday. And I’m looking into finding ways to make all this writing literally pay off, if only a little.

Another interview is in the can. I had a very pleasant 90-plus minute conversation with Andre Cholmondeley, musician and road manager to the Prog rock stars. Soon enough, I’ll be buried once again in transcription. But let’s face it … it doesn’t feel like work at all.

I also need to get on sending out email interviews. I hope those shorter interviews will be as insightful as my in-depth pieces. Time will tell.

I’ve barely scratched the surface of what I’m now calling The MoonJune Pile. What I’ve heard has been pretty special. There are a LOT of talented musicians out there not getting their due. I’ll do my best to help fix that.

I’m not one of those people, and it can be a little frustrating.

There’s so much to do. I want to spring out of bed at 7 or so and dig all the way in to music life, tapering off gradually until it’s time to deal with my day job. Alas, the day job is exhausting, even in less busy nights. I need time to recover.

Two full-time jobs is a tough beat. Balance is out there. I’ll find it.

Strange dreams last night. In one, I found myself unable to get my parent’s attention while standing in what I think was a large boathouse. The boathouse was adorned with suspended boats, trophy cases, and assorted furniture, like chairs and glass coffee tables. When I concluded that my parents were ignoring me, I lashed out and started flipping furniture and destroying everything in sight. Lots of glass being shattered and boats — large boats — being pulled down from a high ceiling.

Now, my parents never owned (or were even remotely interested in) a boat. Nor did they have anything resembling a trophy room or the furniture surrounding me. I’ve also been an orphan for five-plus years. So feel free to chime in if you know the meaning behind that dream.

In the other, I was on patrol. My phone kept vibrating, but I was busy. So I ignored it. We wound up getting a call for a suicide. I arrived to find the body of an old friend. We hadn’t talked in quite some time. For some reason, I then felt the need to check my phone. And there sat a half dozen messages from this same friend, warning me of what was about to happen. To make matters worse, a supervisor I’ve never liked showed up on the scene uninvited, and began to make grossly insensitive remarks about my friend while I reeled for the shock. I heard what he said and charged after him. It took at least three fellow officers to hold me back. That’s when my actual supervisor appeared, calmed me down, and assured me that he would handle the situation.

I have no idea where all this rage and negativity is coming from. I’ve been in a fairly decent mood over the last few days. I’m starting to think I need to find a dream expert who can interpret the unholy mess in my subconscious.

The pile of CDs I need to review is not getting any smaller. My coming “off” days will be very busy indeed. A good chunk of that time will be taken up by absorbing the 40th anniversary re-release of Zappa in New York. I must admit, the manhole cover packaging makes me grin every time I look at it. 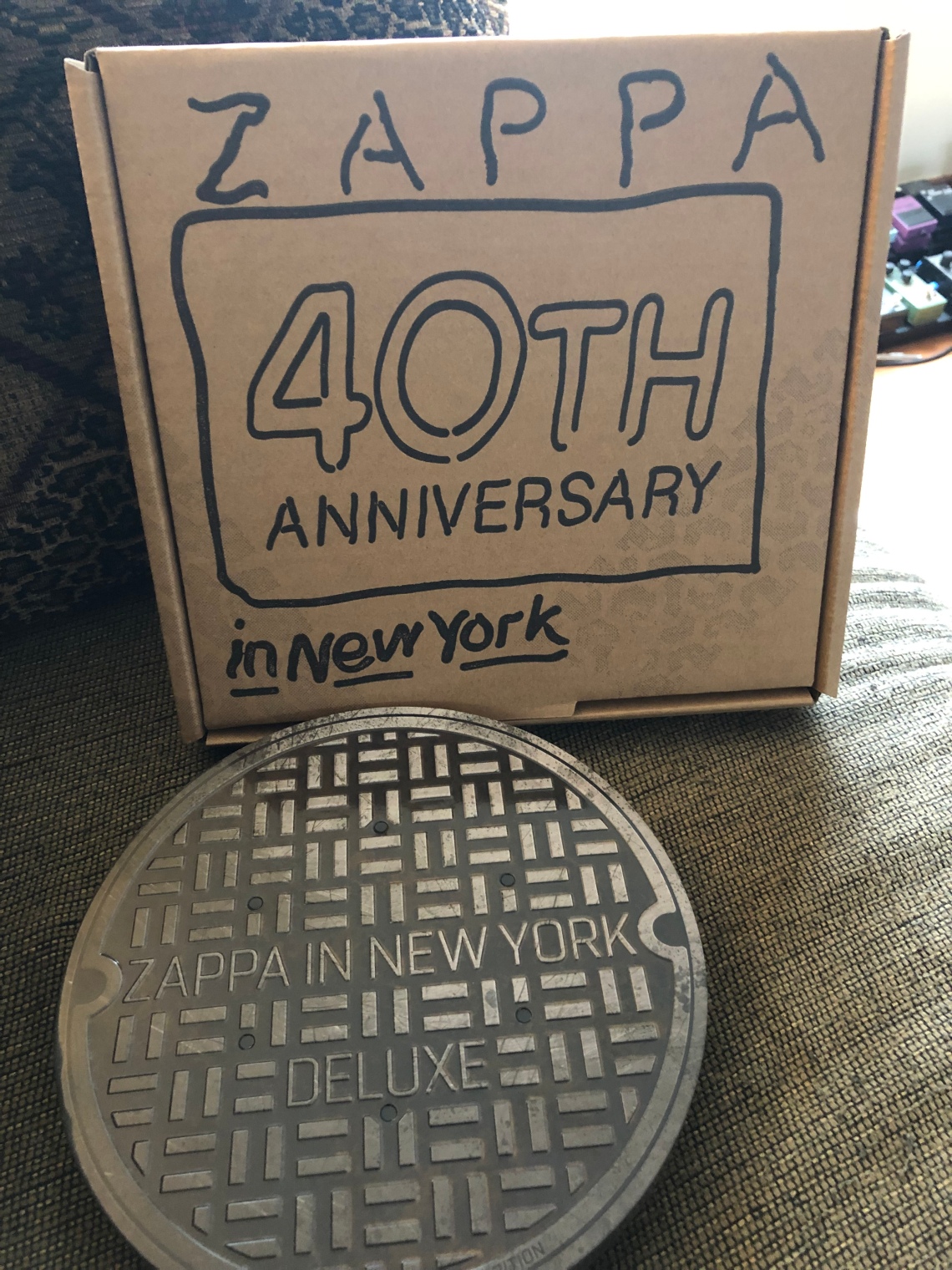 Musically, the format isn’t quite the same as The Roxy Performances, which I quite enjoy. But I have faith that New York‘s performances will be no less fascinating.

Meanwhile, my conscious mind is wrapped up in the concept of taking a leap. But that will have to be a topic in and of itself.