March 28, 15:00; The Prosecutors Office. I had a completely different plan for today. Making a felony arrest was not on my agenda. Just a few hours of low-key overtime. Well you know what they say about the best laid plans. So here I sit, waiting to talk to a lawyer.

The last couple of days have gotten away from me. I’ve done some listening and transcribing, but I always wish I could’ve done more. That’s the way it goes. I’m sure my mind was gearing up to head back to work.

The last stage of the end of my vacation is to shave off my beard. The Hendrix’s are not the most hirsute, but the facial hair was starting to get respectable, even with the grey. It was disappointing to watch the razor bring things to an end. It was a reminder of no longer getting to be what I WANT to be, and accepting who I HAVE to be. Such is adulthood. But post-retirement, watch out!

I’m deeply impressed by the new string quartet album written by Markus Reuter. I’ll be writing about it soon. But first, I have to finish transcribing his interview. And I already know whom I wish to talk to for my next major piece. I sent him a PM today.

My interviews are headed in two different directions. The majority will be 10-question or less email queries, designed specifically for that musician. But four times this year, I plan to do an in-depth, no limits interview, which goes on for as long as it does. Markus’s interview is one of the four, and is well worth the effort. If I get the subject I want, the second interview should be great as well. And I’ve also decided where I want to head for the third chat. I like having defined goals.

My next few days will be rather social, which is rare for me these days. A wedding (in which I am a groomsman), back to work, and ultimately seeing friends from out of town. By the time all this is done, I’ll be eager to crawl back into my virtual cave of solitude.

I’m looking forward to having the time to scrawl through all the music sites to learn about upcoming releases. I constantly feel half a step behind (even if I’m usually a couple of steps ahead of most of my friends). I like being in the musical know. It’s part of the joy in my next life.

It’s the little things I enjoy most. Today’s mail brought me the golf shorts I ordered last week. The next step in my quest to spend more of the spring/summer outdoors, as opposed to being holed up, writing.

That Steven Wilson day I promised myself appears to have arrived.

March 29, 11:29; Out and About. That breeze you felt last night was me transcribing the last of the MR interview. I must admit, I’m quite proud of myself. My questions yielded some great answers. I worried that the piece may get a little long, but then I realized it will read faster than I transcribed it.

In other good news, my second major subject has agreed to an interview. We will be talking in the next couple of weeks.

14:33; The barbershop. The more I deal with people at work, the more certain I am that retirement is a great idea. That’s all I have to say about that.

Meanwhile, King Crimson is releasing a massive box set, covering their work from 1997-2008. This is the last Crimson to truly excite me, particularly the Double Duo of the early aughts. That group was highly innovative, forward-looking, and ahead of its time. I’m sure the set won’t be cheap, so I guess I’ll be working a bit more overtime.

21:50; Home. Just finished editing the interview, so now I can get to work on the introduction and inserting the sound clips. I have a lot of experience interviewing a lot of people in a lot of different contexts, but this is my first time doing this kind of long-form project. I’m quite proud of it, and I’m looking forward to releasing it. Hopefully, that will be around Wednesday.

My little nap was just what I needed, as it’s made me somewhat productive. I’ve listened again to the CDs Mattias Olsson sent me from Sweden. He is a fascinating musician, and we have agreed to talk in the near future.

Right now, I’m headlong into Stephan Thelan’s Fractal Guitar, which never fails to fascinate me. It is positively stunning! “Urban Nightscape” is 17-plus minutes of the finest musical bad-assery I’ve heard in the past five years, hands down.

March 29, 09:48; Out and about. Rain today, rain all day. I wouldn’t mind, except for the fact that I’m a groomsman in a wedding today. I hope the bride has a contingency plan for photos, because I’d rather not stand outside. I thought I was finally too old to be in weddings. Looks like I’ve got one more in me.

I’m going to take a leap. If it works out, my Markus Reuter interview (and hopefully future interviews like it) would reach a much, much larger audience.

I sit and contemplate the musical future, eager to figure out how to get my writing in front of the right set of eyes. That set of eyes is out there, somewhere. I’m hoping it’s only a matter of time before I knock on the right door.

March 31, 20:57; Home. I haven’t obsessed with any of my projects the way I have about the Markus Reuter interview. Not since the book, anyway. I’m really excited by it, and nit-picking at every little detail. Eventually, someone (hopefully that little voice in my head) will tell me to stop, and let it go. I plan to release it Wednesday.

I’m hoping to add two more album reviews to the stockpile before Wednesday as well. I’m taking four days away from both jobs starting Thursday. It will be a much-needed break. My day job burnout is very real, I’m afraid. But it’s being tempered by teaching a couple of new officers, which I must admit I’m enjoying quite a bit. It’s nice to see them grow before my eyes, enabling me to (for the most part) just stay out of the way and let them work.

April 2, 12:45; Working and waiting. I’m finally willing to say the interview is done. I’m proud of my work, but I can’t look at it any more. I obsessed the same way while editing my book. At a certain point, you have to let go. The interview hits the interwebs tomorrow morning.

I’ve been so busy, I all but forgot that Branford Marsalis was in town for a few days. I scored a ticket to tomorrow nights 9:30 show. Seems like a flimsy excuse to suit up once again. I enjoy those times.

April 3, 12:50; Daywatch. The Markus Reuter interview is out amongst the webs. There’s no bringing it back. That was my feeling as I posted it at 05:50 this morning. It always worries me when I’m happy with my work. It’s like I’m waiting for the other shoe to drop. So far, that hasn’t happened. Markus reached out to me an hour or two after it was released, expressing his gratitude. Sweet validation.

After the Branford Marsalis gig tonight, I’m taking a few days away from all things police and most thing music, so I can spend time with friends. It’ll be a nice change. Come Monday, it’s back to the afternoon watch, and building toward a new batch of interviews.

17:05; Home. The joy of seeing my interview do well has been tempered by a bit of real sadness. While I make a conscious effort to keep my work and home/music lives separate, that is an impossibility for the next day or two. One of my co-workers has died.

As policemen, we prepare ourselves mentally for the possibility of losing a friend or comrade in the line of duty. You don’t want it, but you know it happens. This wasn’t the case today. It was a health issue. He went from chest pains to the hospital to the ICU to passing away in less than 24 hours. Nothing prepares you for that.

It doesn’t help that we’re around the same age. The potential for a dangerous situation is one thing. That comes with the territory. This … this is my mortality standing up and reminding me that no one gets out alive.

Rest In Peace, my friend.

April 4, 21:41; Home. The Branford Marsalis Quartet nearly set the stage on fire last night. They were scorching with intensity. Then they were peaceful. And then they burned some more. It was a fast 80 minutes. I wish I had time to see more than one set.

Photos were forbidden, which I was both disappointed by and content with. So I walk away from a choice gig with pleasant memories and a new CD to mark the occasion. 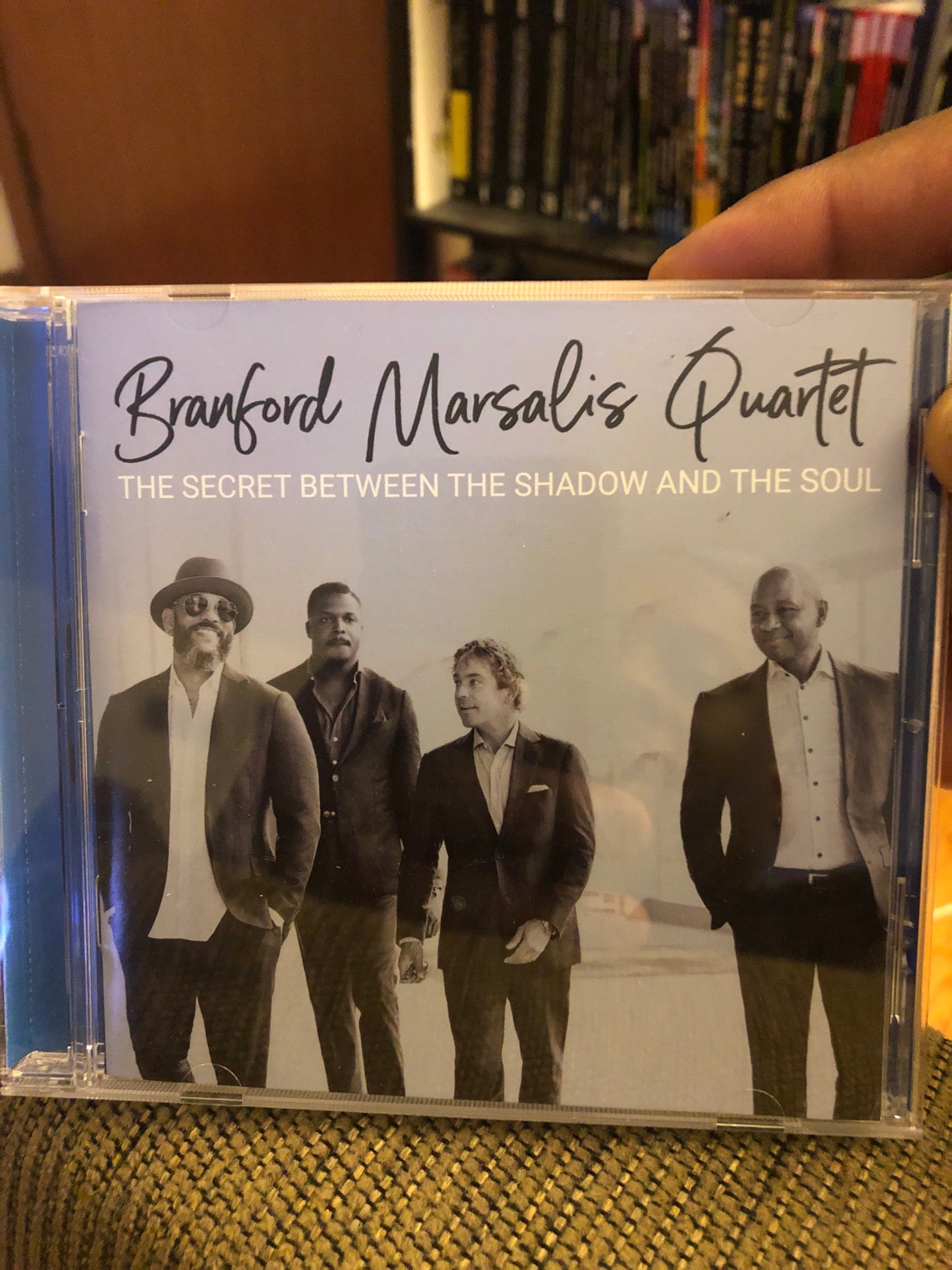 Brad Mehldau is in town next week. Nate Chinen went on about him quite a bit in the book. I feel like I have no choice but to be there.