I was born on November 8, 1966. Sixteen days after John and Bobbie Hendrix welcomed their firstborn into the world, the Beatles gathered at London’s EMI Studios in Abbey Road to begin work on the album that would change music as the world knew it, forever. And while we are now both 50 years old, I’m going to go out on a limb and say Sgt. Pepper’s Lonely Hearts Club Band has made a slightly bigger impact the world over than your friendly music blogger.  And deservedly so!

Two weeks ago, Christmas came early. The music gods (ok, it was Amazon) presented me with the ultimate musical gift in the form of the 50th anniversary deluxe box set of Sgt. Pepper. I don’t think I’ve ever been so exited to receive something in the mail. I’m sure many of my co-workers will attest to this, as well. It took about half a second for me to realize I had received something truly special.

Do I really have to explain why this album is so important? What can I say about the significance of Sgt. Pepper that hasn’t already been said? I will simply say this: this album is the catalyst. This is the album that inspired and launched countless bands and albums the world over. Half a century on, the record’s impact is still being felt. It would be virtually impossible to find a modern recording artist who hasn’t been influenced in some way by this album, whether musically or technically. Now there’s a documentary I would love to see!

The funny thing is, I wouldn’t even consider Sgt. Pepper my favorite Beatles album, if pressed. That honor would go to the album before this one, Revolver. Still, there can be no ignoring the significance of this album. People choosing to own Sgt. Pepper as their only Beatles album could do a helluva lot worse. But why would you want to do that?

This box set is a treasure trove. It was a long time before I could stop smiling as I explored what lay within. There is something to behold on every level, starting with the 3D hologram album cover, which cannot be given its deserved justice by my camera. 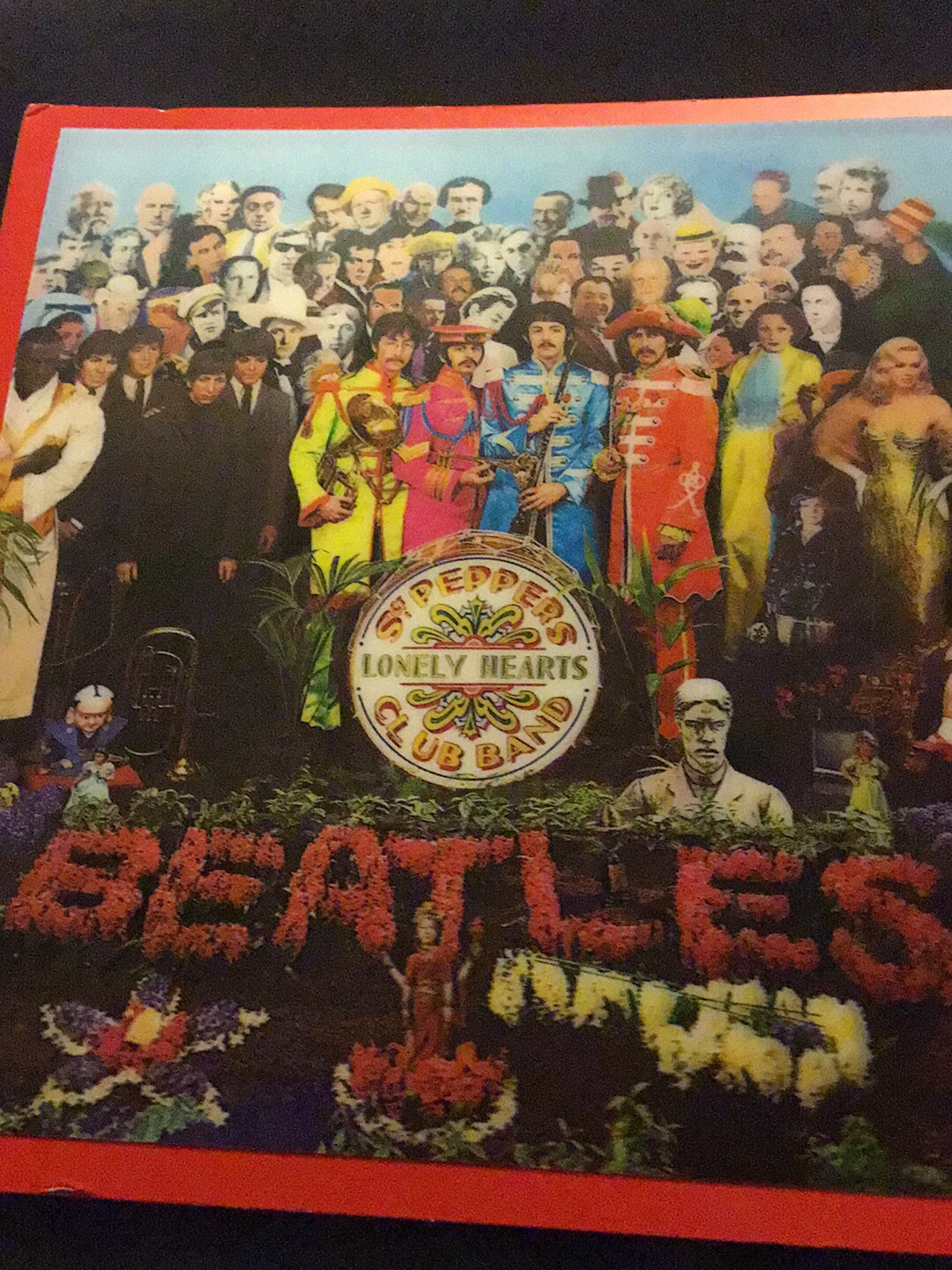 But the cover is merely a sleeve protecting the rest of the box. I got a real kick out of the cover of the box itself, which is designed to look like the album’s master tape reel. 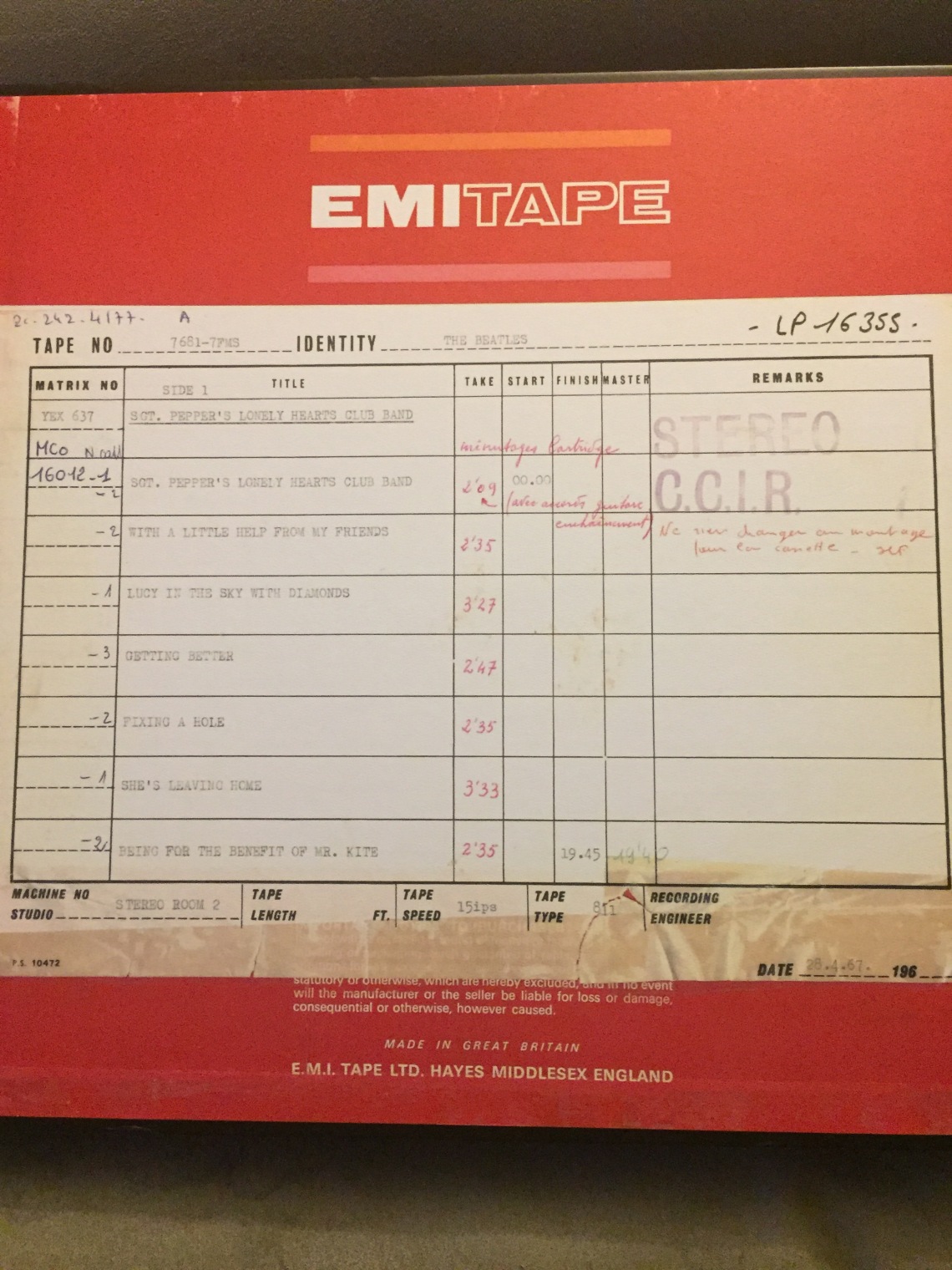 Lest I think this was a mere gimmick, I was equally thrilled to see Side Two properly represented when I turned the box over.

The original iconic gatefold album sleeve is represented inside. For a moment, I thought I had mistakenly received the LP version of the box set!

I found what I was looking for inside. Four CDs, a Blu-ray Disc, and a DVD contain a brand new stereo mix of the album, alternate takes and mixes of several songs, bonus tracks of “Strawberry Fields Forever” and “Penny Lane,” a 5.1 surround mix, the original mono mix, a high-resolution audio mix, and a documentary on the making of the album. Whew!!!

The box includes the artwork that came with the original LP. I suppose I could frame and hang the posters, but I think I’ll leave them where they are for now, in order to keep the box set intact.

But the best prize (aside from the music, of course) lay on the bottom of the box. Out came a 144-page hardcover book.

The book is loaded with stories about how the album came to be, the cover art, recording session details, and lots more. It’s also full of great photographs.

As I’ve said, my photos don’t do the package justice. That being said, I think I know who’s going to win the Grammy for album art and packaging next year.

Did they leave anything out? I can’t think of anything. I suppose a copy of the LP would’ve been nice, given how much the box set costs. But that’s a very minor gripe. I’m perfectly ok without it.

So, let’s get to the root of the matter. How does the new stereo mix sound? Is it worth all the other bells and whistles?

More than a few people consider the original mono mix definitive. That’s fine. To be certain, this mix is the gateway, the entry to the sound of great potential. The 2009 remaster was, to my ears, a vast improvement. It took the original sound and expanded on it, giving it more depth. This new mix (created by Giles Martin, son of legendary producer George) is … something else.

When music journalist Sid Smith heard the new mix, he declared the 2009 remaster “irrelevant.” I have the utmost regard for Sid’s opinions, but I wondered if he wasn’t exaggerating just a bit. And then I heard the new mix. Sid was on to something.

I’ve been using the same 280-watt Cerwin-Vega speakers for more than 20 years. They provide warm analog sound with a nice digital punch. When I’ve bought remixes and remasters, I’ve been able to tell the difference. This was no exception. And the difference is positively staggering.

From the opening notes of the title track, I felt like I’d been handed an entirely new album. The sound was still warm and clean. But it’s now more expansive, and deeper. The new mixes have almost always benefitted the rhythm section above everything else. That appears to be the case once again. Paul McCartney’s bass hits like a punch in the gut, while Ringo Starr’s drums bludgeon you about the head. Now that you’re reeling, the guitars of John Lennon and George Harrison pierce the eardrums like a surgical needle. There’s no escaping this sound. It’s got you, and it’s not letting go!

Played at the exact same volume level, the mono mix sounds almost quaint by comparison. It’s a lovely testament of a band at its best a half century ago. The new stereo mix sounds like it was recorded yesterday. From three feet away. Unfortunately, I don’t have a speaker setup to accommodate the 5.1 surround mix. I haven’t been in a big hurry to purchase that kind of setup. Suddenly, I have a whole new layer of motivation.

This is normally where I would post a clip or two to help make my point. But nothing generated on a computer via YouTube will do this album justice. You must get a copy, and experience it for yourself. It’s the only way to truly grasp what has been done to and for this classic album.

This collection is aimed at Beatlemaniacs, and it hits the bullseye. More casual fans would do with simply buying the new stereo mix. Believe me when I say your musical life is incomplete until you’ve heard it. That’s not hyperbole.

So let me introduce to you, the best box set I’ve ever bought, Sgt. Pepper’s Lonely Hearts Club Band!!!