In music, first impressions are everything. Artists rarely get more than a few seconds to draw in potential listeners before they move on to something else. The ante is only raised when said impression takes place before a live audience.

The Progtoberfest festival at Reggie’s Nightclub in Chicago has been a golden opportunity for music fans to meet and learn about as many as three dozen bands over three days. That’s a lot of information to take in! Without that indelible first impression, it is very easy for a band’s sound to go into the listeners ear and exit just as quickly. The hook, as they call it, must come hard and fast.

Soften the Glare, a power trio from Raleigh, North Carolina, had such a hook. Sitting a mere eight feet away from them, I can assure you they made one helluva first impression!

The band brought forth from the tiny “music joint” stage a remarkable melange of metal, funk, and jazz … the true meaning of “fusion.” They played with such power, I could practically feel the top of my head being torn off. The music had elements I was familiar with, but those elements had been scrambled just enough to give Soften the Glare its own sound.

Bassist Ryan Martinie tends to make the fastest on-stage statement. With a playing style that meshes Stanley Clarke, Jaco Pastorious, and Flea, Martine is a pure showman who looks like he could leap off the stage, bass thundering away in hand, at any moment. I remember being mesmerized by his playing early in the set. After two or three tunes, he removed his shirt. I joked to the man sitting next to me, “Uh-oh! It’s about to get serious!” I have a hunch Martinie (whom I would learn played in Mudvayne, a band I had a passing familiarity with from the late 90’s) heard me, because I saw a sly grin appear on his face as the band launched into the next tune. Sure enough, what I thought was already at 10 found its way to 11.

It would have been easy to get lost in Martinie’s efforts, but I made a conscious decision to see what the rest of the band was doing. It didn’t take long to realize guitarist Bon Lozaga and drummer Mitch Hull were every bit as animated as their bassist, even if they were relatively stationary. Lozaga’s sound had a John Goodsall Brand X quality to it (no doubt the influence of his tenures with Gong, Tiny Boxes, and Gongzilla), as he alternated between chords and slippery single-note lines with ease, speed, and efficiency. Hull’s sense of touch and dynamics nicely filled the spaces left open by his bandmates. They were not support players. Their sound was every bit as essential in order to propel this remarkable music forward. Martinie would also appear to launch himself toward Lozaga from time to time, which was met with a smile from the guitarist as he dug into his part even harder. This band had chemistry for days, and their set was one of the festival’s standouts.

Soften the Glare was promoting its first album, Making Faces, at Progtoberfest. It can be challenging to capture the intensity of live performance in the studio, but these guys were able to do it. The bass lines were thunderous, the guitars were slinky, and the drums presented high levels of hyperkinetic action which combined for a dizzying array of musicality.

Now the band has returned with its follow-up, entitled Glint. It is everything fans loved from the first album, intensified and augmented. In addition to the metallic funk, they have seen fit to add new elements like strings and horn sections, taking the Soften the Glare sound into new, exciting territories.

There can be no questioning the band’s intensity on stage, but this does not apply to speaking to them in person. I spoke to Martinie after the Progtoberfest set, and found him to be almost painfully shy. Whatever gregariousness he possessed was for the stage. Otherwise, he was bashful and down to earth. I was only able to speak to Hull briefly, but was kind and gracious toward a new fan. Lozaga comes across as the band’s spokesman, unassuming and pleasant even in the face of generating new business. He strikes one as the kind of person most eager for you to share in the joy he gets from performing with this group.

CirdecSongs: Tell me about the driving force behind the new record.

Bon Lozaga: Well we rehearse weekly and when we do, we always wind up bringing up new ideas. If the idea develops into a song, then we want to record it as soon as possible and move on to the next. We had enough songs for an album, a producer (Jamie King) and a studio, so away we went! Actually some of the songs from Glint were started when we were recording Making Faces. Writing is where our heads are at and it’s one of the band’s strongest driving forces!

All of the songs on both albums are co-written by the three of us. If we dig an idea presented at rehearsals, we will start working on it. Everyone basically writes their own parts, and the main goal is to make the thing come alive and have its own identity. The tune needs to make us smile when we are done running through it. Sometimes, it’s just a bit that excites us and we will add other bits and ideas to it until we come up with a whole (composition). When we come up with something that we really like, we wind up playing it a lot at rehearsals. Songs that don’t cut it just generally stop getting played and fall by the wayside. We have tons of ideas that never see the light of day. What’s amazing is that an idea will start at one point and then end up in another universe once the three of us have put our two cents into it. But in the end, we all have to dig it!!

Power trios give each musician more room to stretch. How do you maintain an optimal sense of balance between the three of you?

Most of that is music 101, we have to listen to each other. We write parts that get out of each other’s way and try to make each individual part as strong as it can be to make a statement! With only three people in the band, that makes it a little easier.

How do you feel this album stands apart from your previous effort?

It’s similar in way, because the songs are all over the place! But I think this batch of songs are more mature and definitely more lush with the extra instrumentation. Of course it’s the three of us again so it will have some similarities too!

What led you to use horns and strings for this album?

We wanted to for the first album but just didn’t have the budget. We decided on this one, if it sounded like a horn, we were going to get a horn player! And of course “Cluck” (a high-octane country shuffle) just screamed for violin! Thanks to Jamie, we got a hold of some great players. I hooked us up with Gregory Meckley, who played violin on the album.

Ryan can be quite the showman onstage, with you and Mitch taking a more laid back approach to your playing. How did this approach develop over time?

Well Ryan is a natural on stage and really gets into a zone when we perform. Playing with him has made us more animated also, as you have to respond to that! I mean what do you do when someone runs up to you on stage and gets in your face! It’s made my live playing much more enjoyable and emotional, which the fans can see. So many times after a show people come up to us and say, “You guys really enjoy what you are doing, and each other” and we do!!

Your original tunes are plenty cool. But what tunes can you imagine the three of you covering?

We experimented early on, when we didn’t have a ton of material, with covering some Rage  Against the Machine and King Crimson, but we haven’t thought about doing that for a while now. 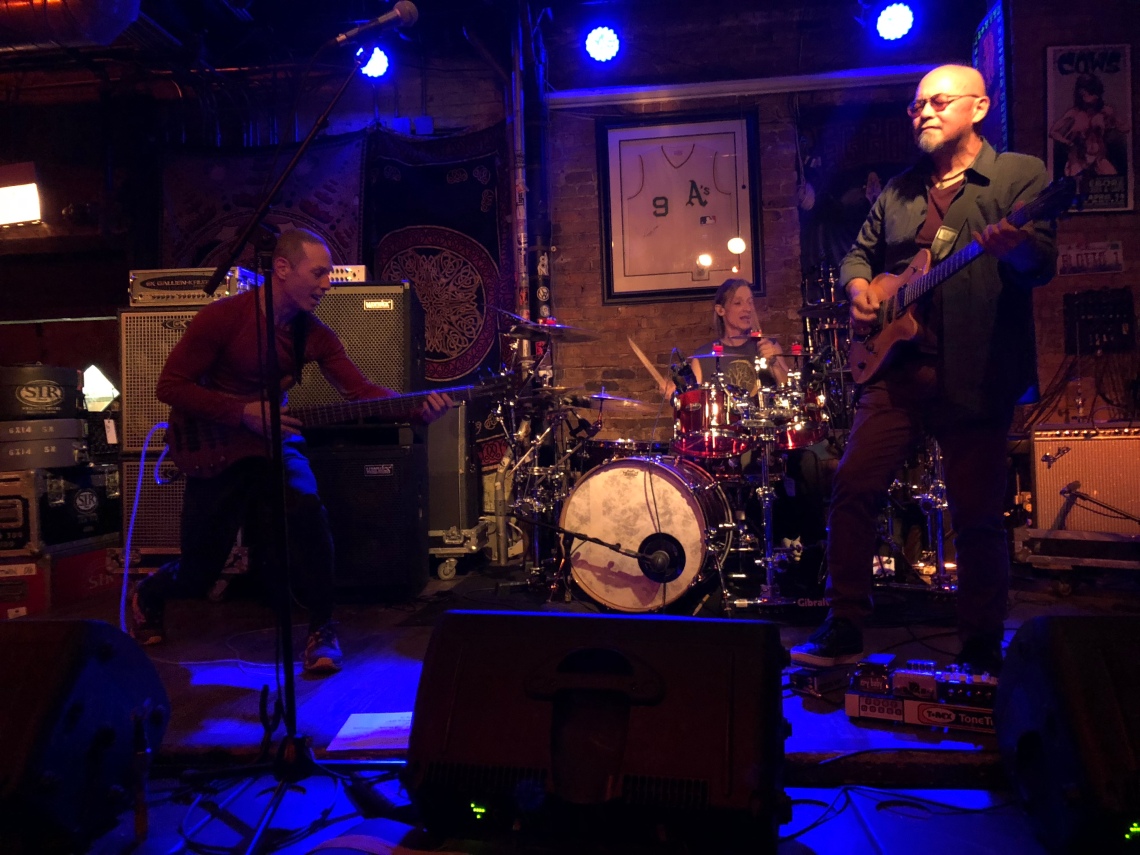