I looked outside before I left for work, and all I could hear in my head was Ned Stark in Game of Thrones. “Winter is coming.”

Of course, winter comes to Missouri every year. My question is, why is it here so damned early?

The air feels like late January. Problem is, it’s mid-November. Apparently, we’re skipping straight over fall again. The cold is annoying enough. What I’m really bugged about is my natural gas bill. It’s about to go through the roof again! The great thing about spring and fall is they give me a couple of months of low utility bills. Electricity kills me in the summer, gas does it in the winter. Woof! What a drag.

Elsewhere in the world, it’s all about the exploration of new music. I’ve been really annoyed at not having the time to sit down and write as many reviews as I’d like. But I believe I’ve found a work-around. From this thought process, a valuable lesson was learned. Everything does not have to be a project. Sometimes, the easiest answer is in fact the right one! And with that, a new review layer has been born.

And now to continue saving the world, one car accident at a time. 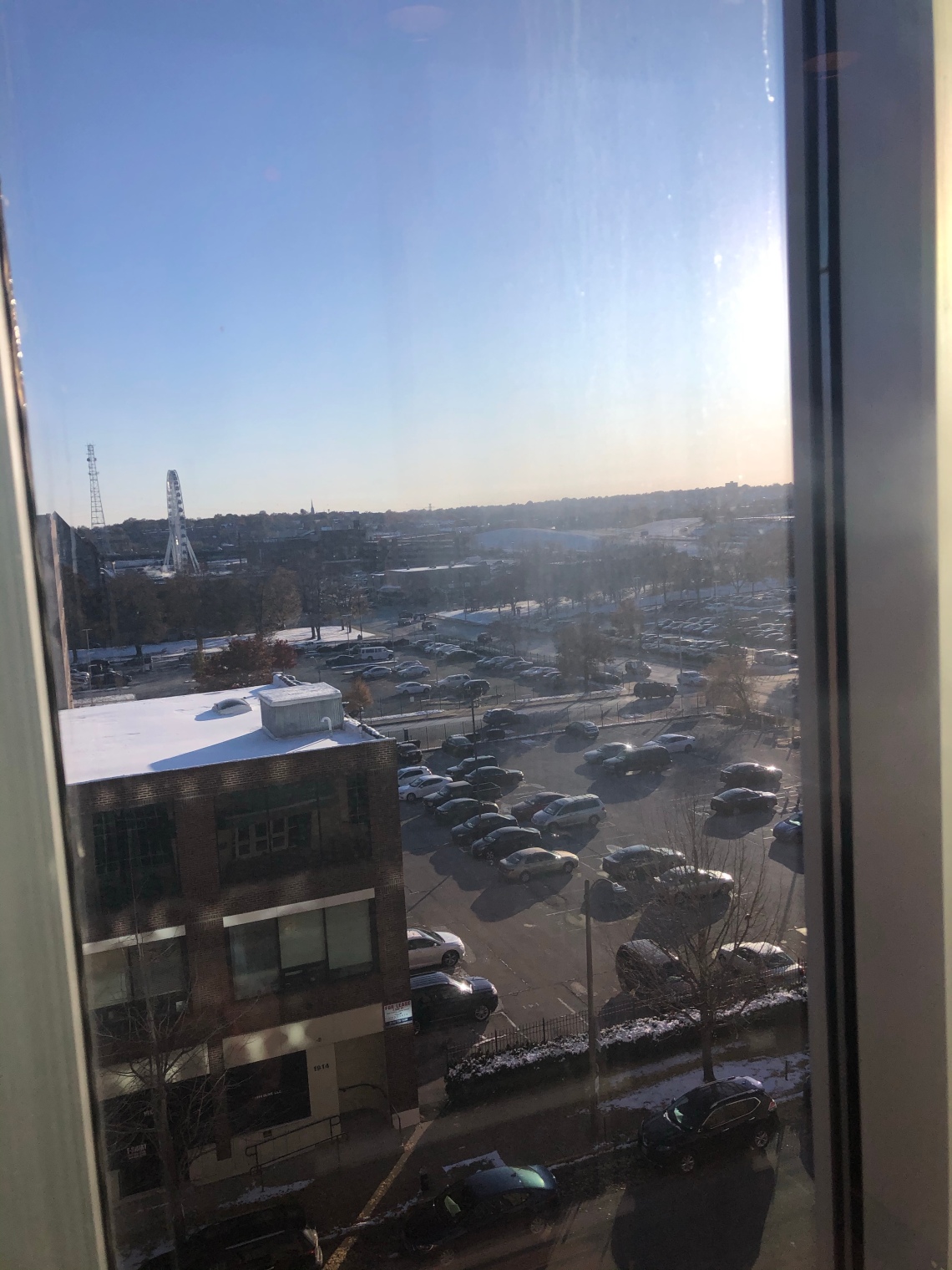 People never cease to amaze me. The highways are frozen in certain spots, yet people still feel the need to drive at warp speed! Then they’re amazed when they spin out and crash into concrete barriers!

But that’s not my real issue. While dealing with one of these failed Formula 1 drivers last night, I had to block the right lane of traffic on the highway. There I sat, in a big ol’ marked Chevy Tahoe, with all of my emergency lights whirling and flashing away. And two people still found a way to almost run into the back of me!

You have GOT to be kidding me!

I can only believe that my car was a flame waiting for a couple of moths. What, if anything, goes through people’s heads?!? I really don’t understand it! Things like this never fail to make me crabby. They also reenforce why my decision to retire is the right one.

Musically, I’ve been exploring live jazz albums for a future list. I thought Return to Forever might make it, but they just missed.

This is what happens when I stick to ten albums.

One of my co-workers has gone home ill. He was training a rookie. That duty falls to me now. 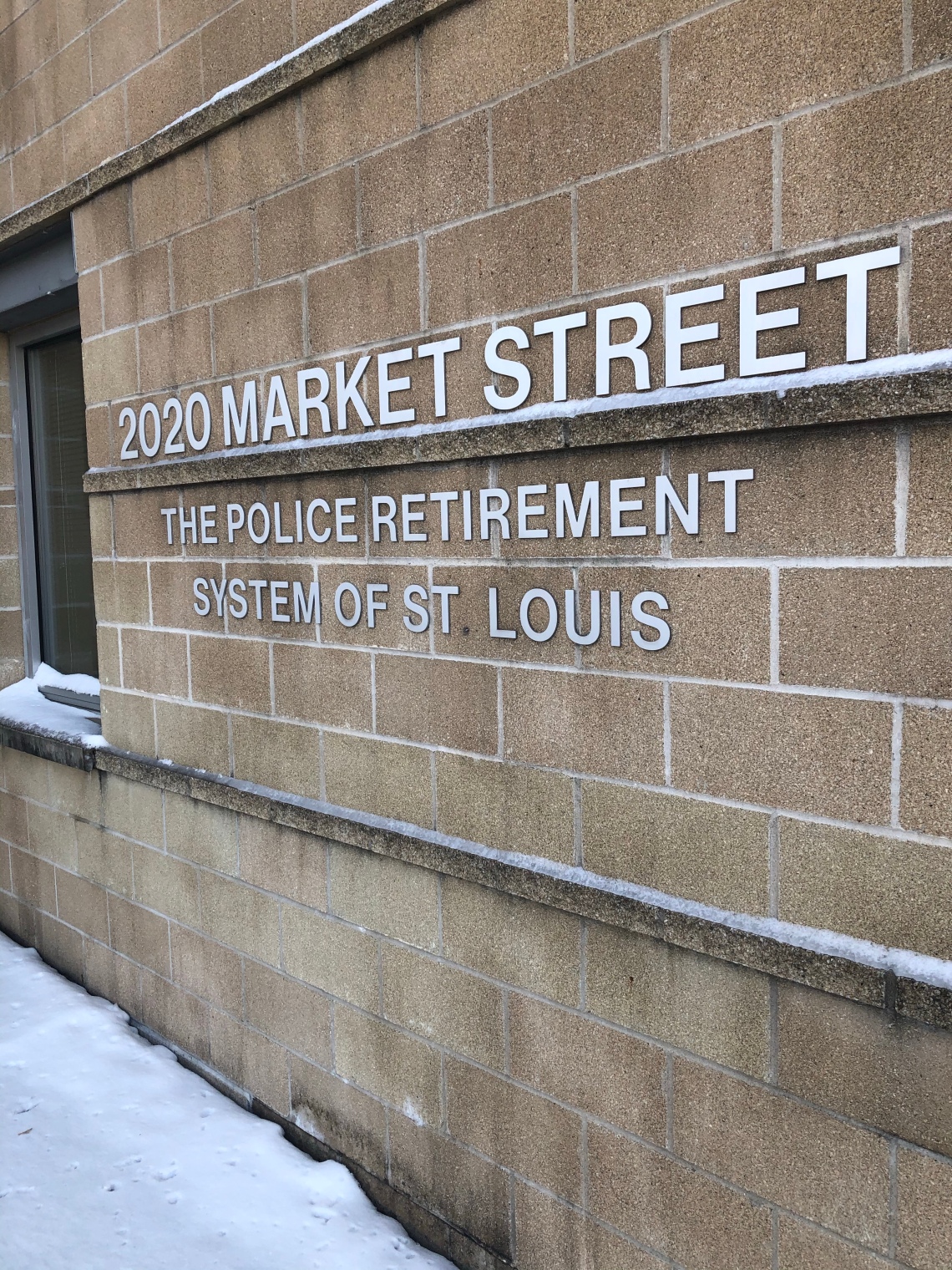 I’ve always known my job would take me to many places. A pre-retirement seminar was not one of them. Yet there I was. It seems like I got out of the Academy just a few months ago. It’s really been almost 25 years.

By and large, the day was filled with good news. I think I can accomplish my goals and lead a fairly happy life in semi-retirement. I’ll have to do a little work somewhere, but that’s all right. The stress level should be much lower.

I’ve made my way to the library auditorium where Nate Chinen will be speaking.

There are two inherent problems. First, doors we’re supposed to open 20 minutes ago. It drives me crazy when the venue runs late. Worse, I’m here with one other guy. That’s it. 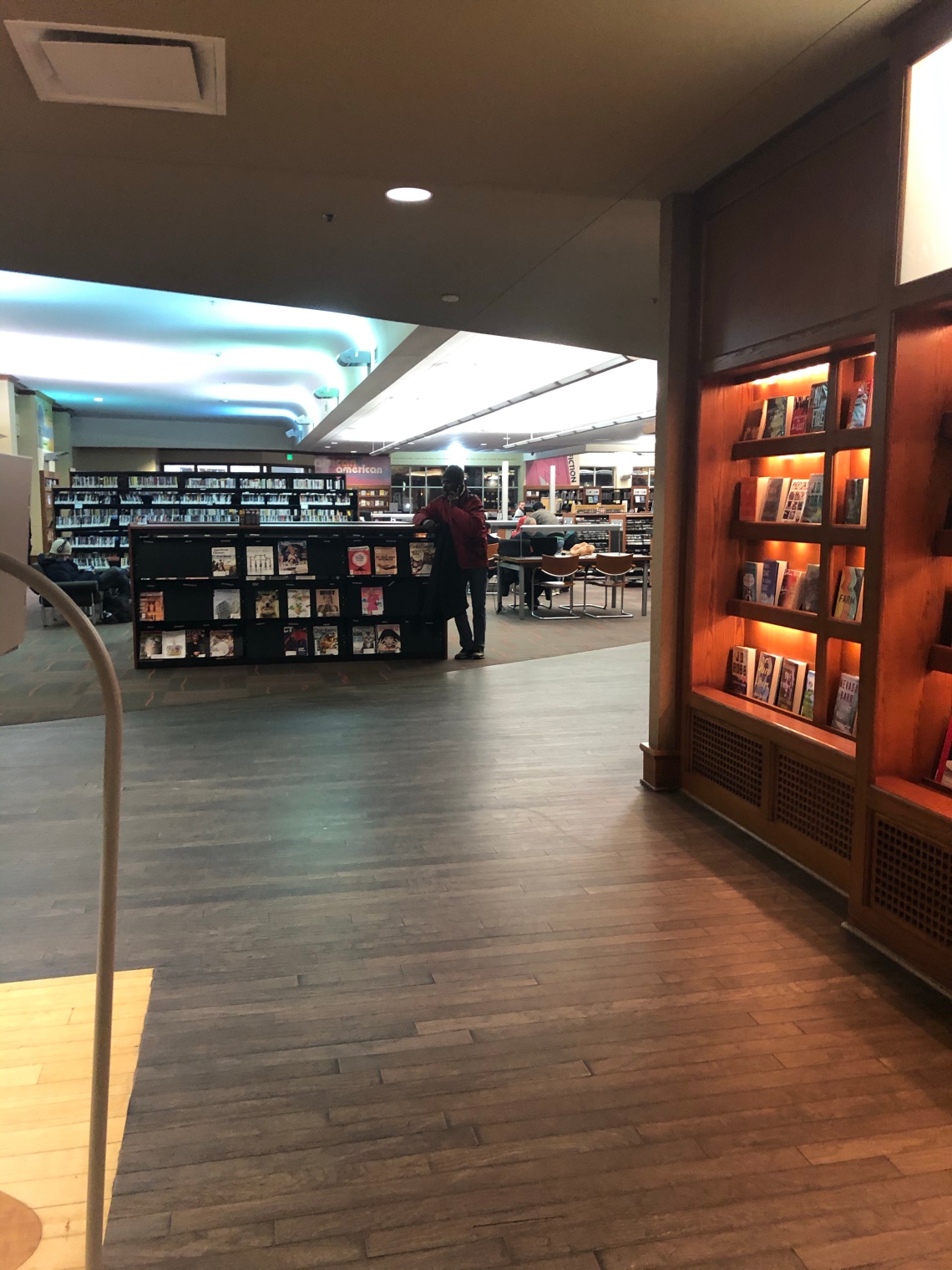 I hope there is a better showing in the future. Not that I’m all that surprised by what’s happening. I have a knack for finding poorly attended gigs. Things usually pick up. I hope that’s the case tonight. I feel horrible for the artist, and embarrassed by my town. This is why I always seem to have to head to Chicago to catch a gig. The artist won’t bother coming here. And who can blame them?

The day was saved. People showed up. Apparently, most people are content to show up at an event at the last possible minute. I can’t do that. My brain just doesn’t function that way.

Nate Chinen gave an interesting reading, centered mostly around the first chapter of his book, and the “changing of the guard,” as he put it. The next generation is moving in, and their attitudes toward jazz are not rooted in the traditional forms. This is a good thing.

He opened the floor for questions. It was nice to be surrounded by musically knowledgeable people. And there’s no doubting Nate’s passion. And he’s a really nice guy. We’ve laid the foundation for an interview. I have more research to do. 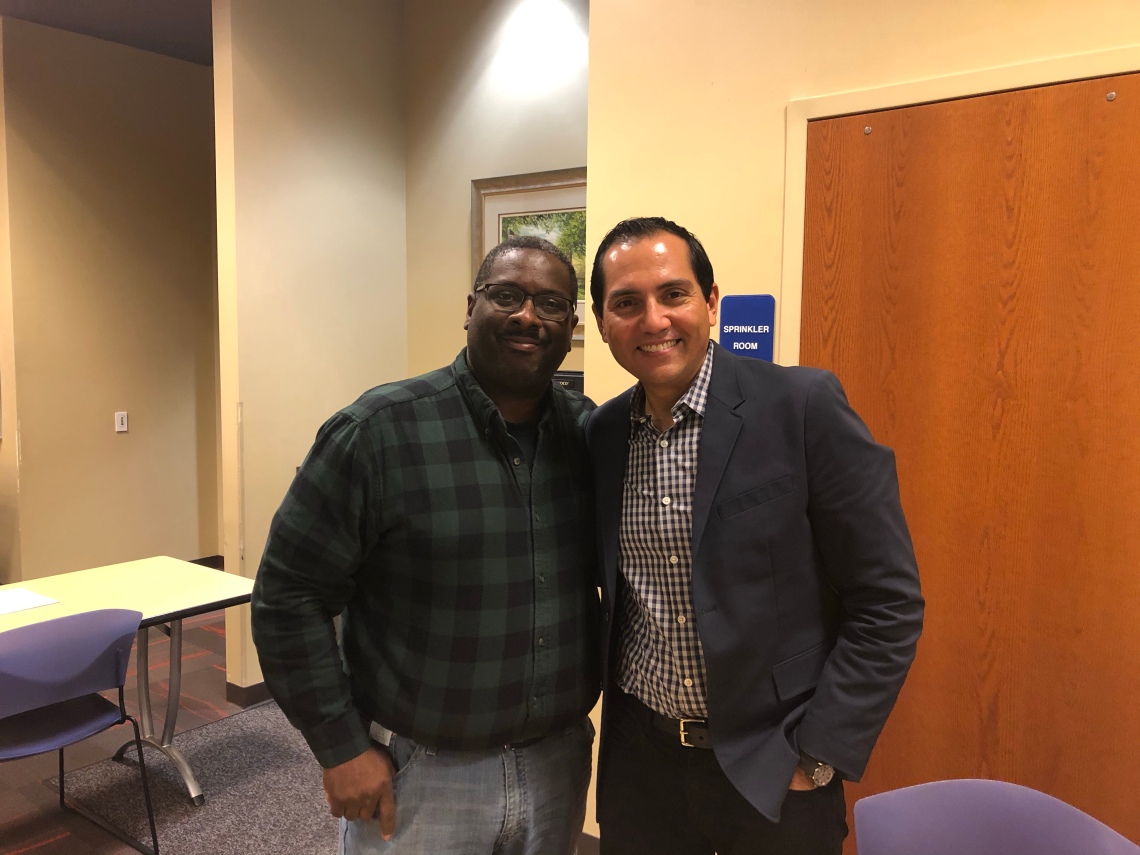 I don’t know why I plan to do things on my first day off. I should know better. I’m tired, and nothing is gonna happen until I sleep. My grand writing plans gave way to Dreamland. Oh, well.

I think my brain knows my body needs to preserve energy for the big show tonight. I’ll try to dig in on the writing tomorrow. 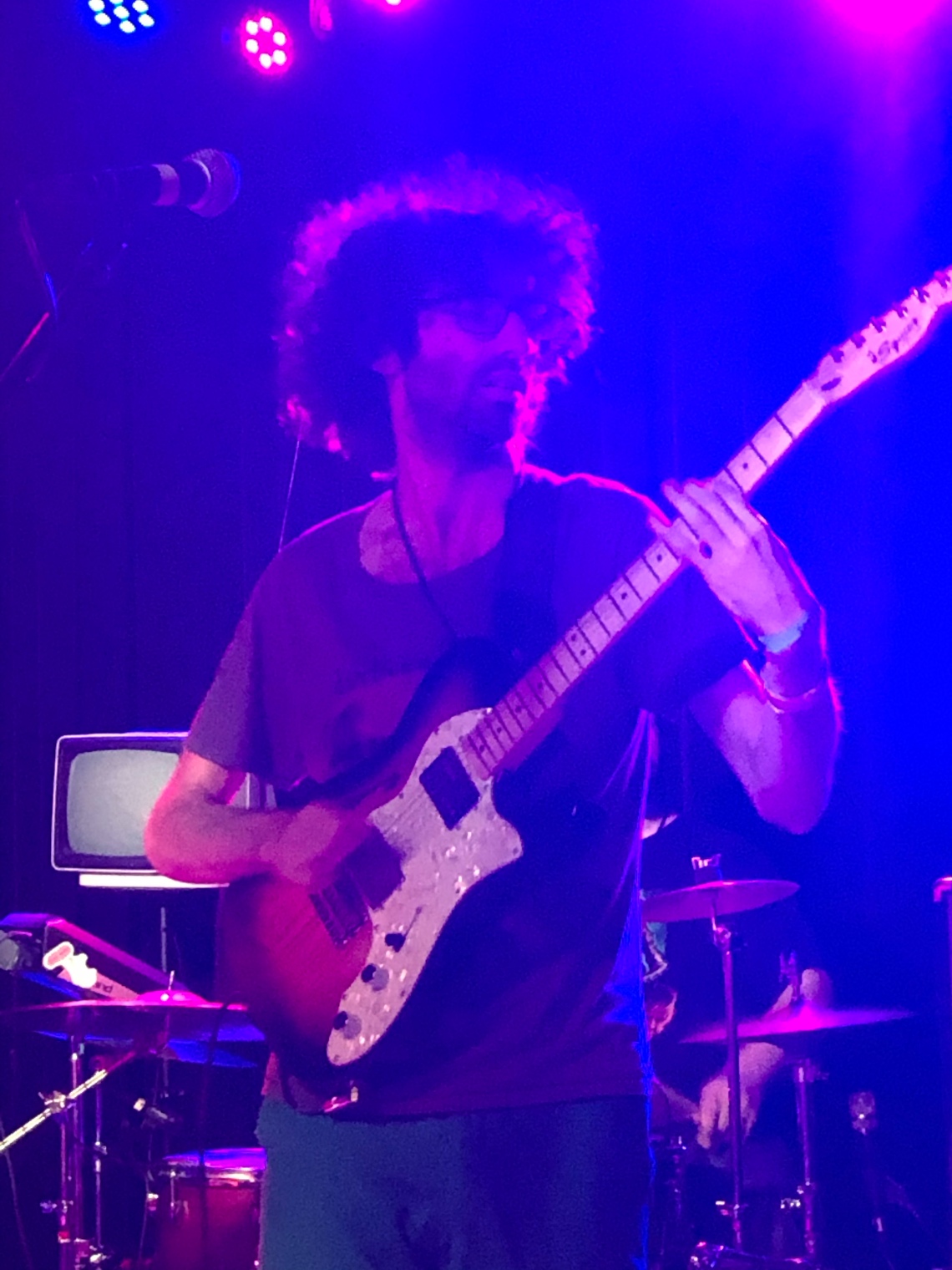 Another night, and another killer show. Tonight, it was a triple bill at Fubar. Thank You Scientist was the headliner, supported by Bent Knee and The Tea Club. We could call this the All Wheat and No Chaff Tour.

Yes, I caught TYS and Bent Knee in Newport, Kentucky five months ago, but there’s no way I miss these guys when they come to me! And they’re only getting better. It’s like watching a band grow before your eyes. It truly is a privilege.

It was my third time seeing each of those bands. But this was my first time seeing The Tea Club, and they were fantastic! They had a really cool semi-psychedelic Indie vibe. 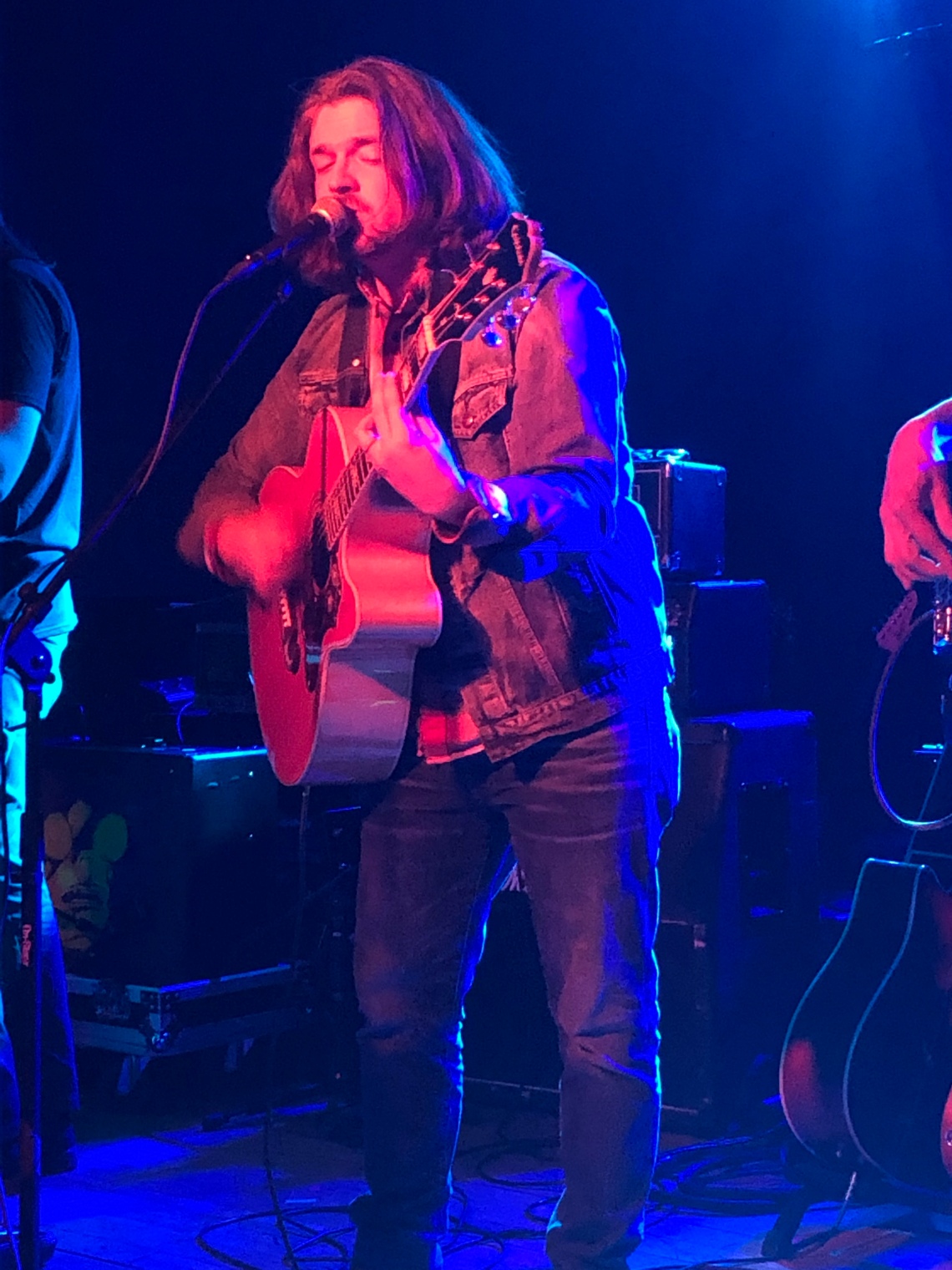 They reminded me a bit of Foxing, another of my Indie favorites. I picked up a couple of Tea Club CDs. I can’t wait to dive in.

Their new album, If/When is quite the undefinable marvel. Landing somewhere in between Indie, psychedelic, and prog, this album runs you through some lovely paces. In my mind, it’s Foxing (another Indie fave) colliding with Pink Floyd. And that doesn’t really do it justice.

One of the more flattering moments of the night came after I introduced myself to the band’s main vocalist, Dan McGowan. Upon hearing my name, he said, “Hey, don’t you have a page online?” I quickly replied that I did. “I’ve been following you,” he said and mentioned specifically my piece on King Crimson’s Discipline. How flattering!

There are times I wonder if anyone really gives a damn about my writing. And then I have a moment like that one. That’s pretty motivating. 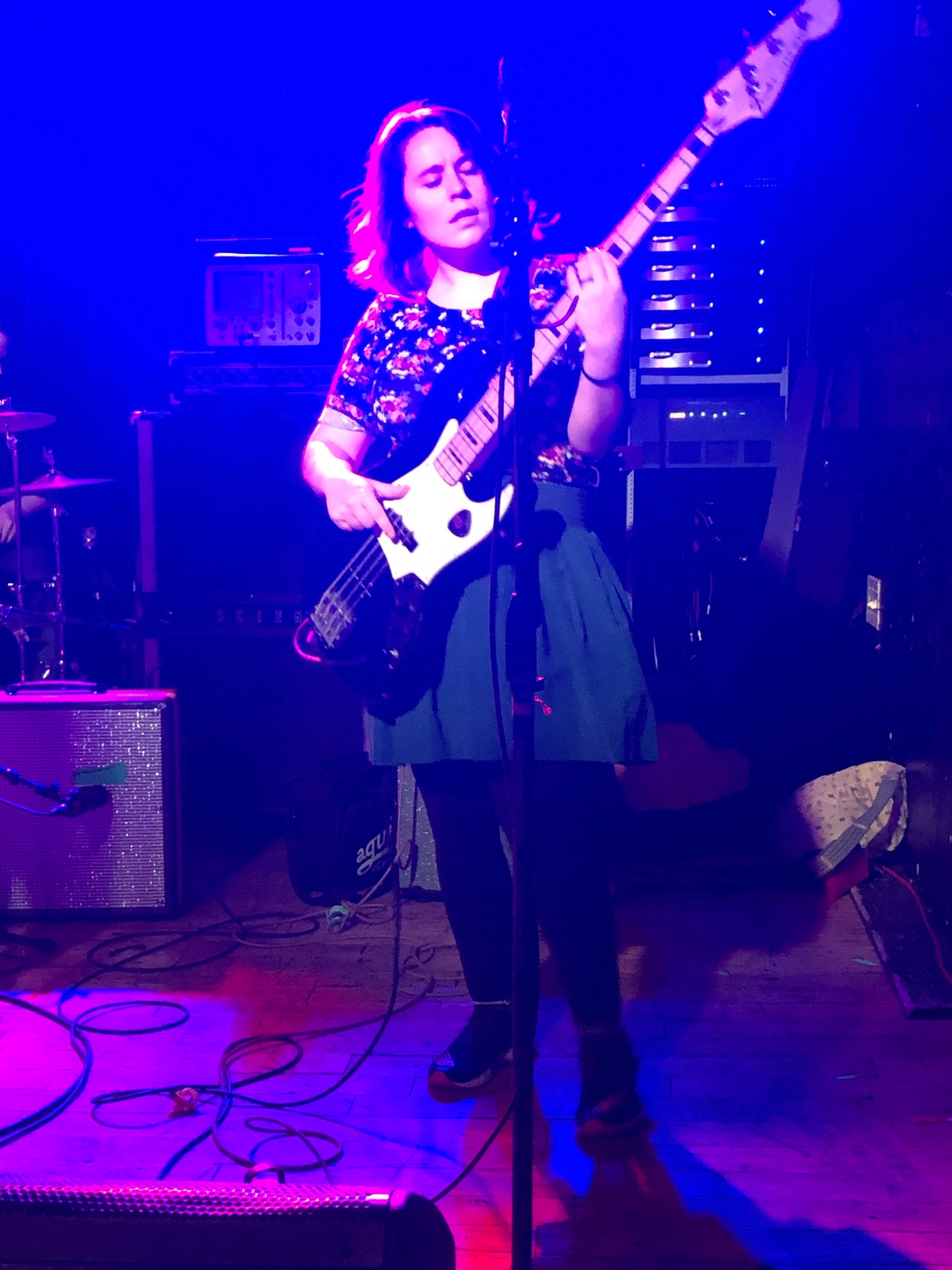 I enjoy a drink now and then. A good beer. A nice scotch. But I don’t drink to excess. I haven’t gotten drunk for a very, very long time. And yet I found myself experiencing an all new kind of hangover today.

I’m calling it the Post-Standing Gig Hangover. It comes from being on my feet — mostly in the same place — for three or four hours. It was particularly bad this morning. My entire left side, from my lower back to the top of my foot, was in red- to white-hot agony. I’m sure it’s a highly inflamed IT band. I need to get back in the gym to rehab this thing. I can’t got through this all the time, and I have a LOT of gigs in my future. Very few of them will be seated.

My first Bent Knee album was Shiny Eyes Babies. GoGo Penguin and Mammal hands are two of my favorite modern jazz acts. I have all three of these albums on CD. And now I have them on vinyl? Why? Because it seemed important to me.

If all goes well, I’ll have a much better turntable by the end of January. I want to play really good records on it. This will be particularly true of jazz and old-school soul. Yeah … I’m one of those guys. I’m liking the sound of post-rock and a few of my Prog faves as well. Maybe it is just the CD master’s sound. I don’t care. I feel the warmth. Therefore, it exists.

As one of my former young trainees said to me, “Let me live!” 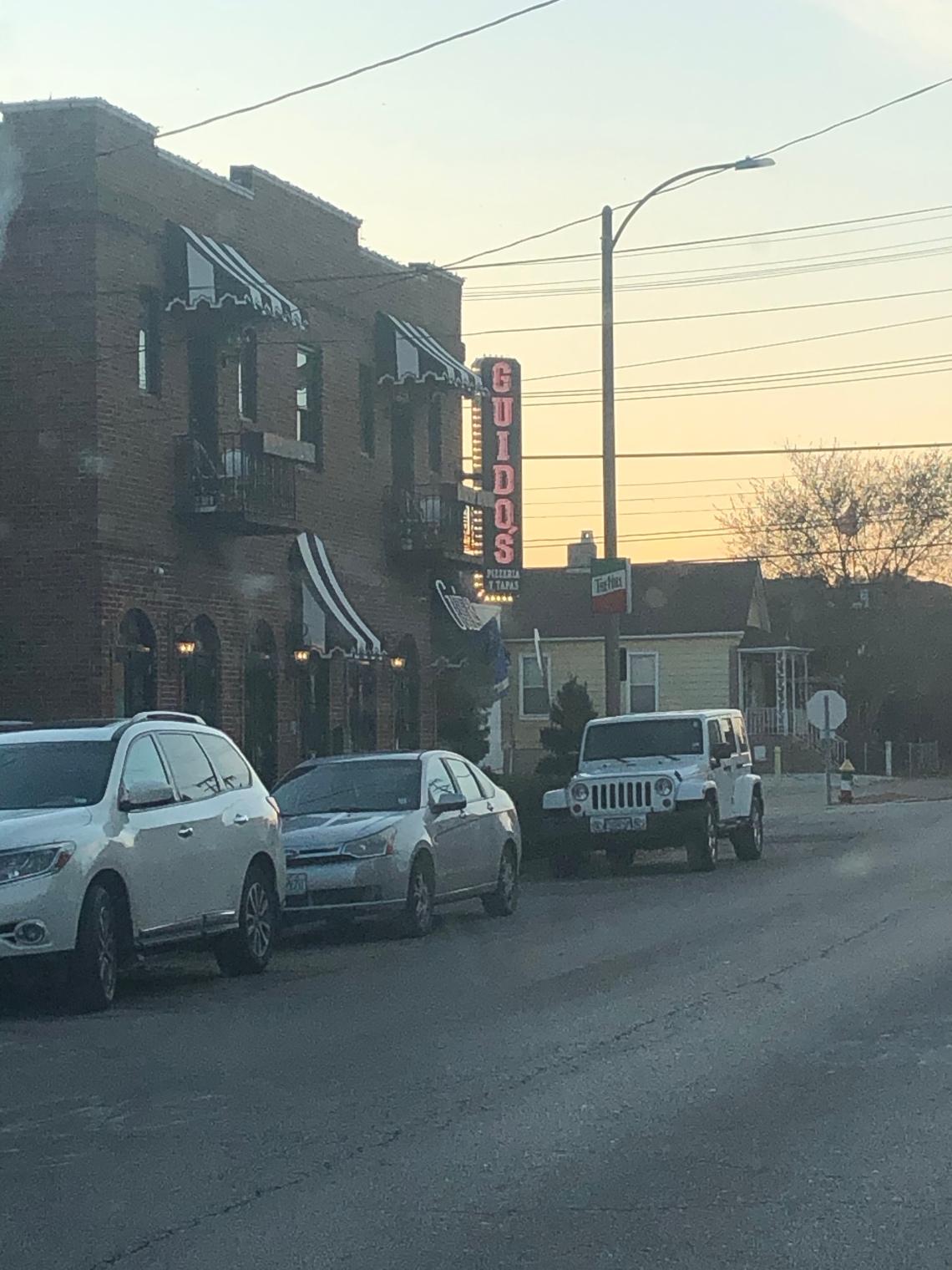 I’m supposed to be off today. But I moved this off day to Thursday to catch the gig. So here I am. Every day, this job gets a little more in my way. Such is adulting. For now.

And it gets “worse.” I start training a new officer come Monday. I was hoping I could dodge this one, but no such luck. Well, nobody forced me to be a training officer.

The issue is, I have to run at a different speed for the next 15 weeks. I’ll have to keep the kid busy, and winter is coming. Which means business may slow a bit. I’m also hoping that this assignment won’t interfere with planned road trips, staring with the one in a couple of weeks. I’ll have a talk with the boss on Monday before booking my hotel.

I’ve truly become a fan of The Tea Club, it seems. They have a cool Indie sound, mixed with just a tinge of prog and psychedelica. The two CDs I bought are both rock solid, and will be getting repeated “airplay” at home.

I live in a world where I have a 17-year-old daughter. Try as I may, there’s no denying it. It seems like just yesterday I was carrying her around the house and teaching her to raspberry. And now she can go to R-rated movies whether I want her to or not. It’s gonna take some time to unpack this.

Jazz Sunday has gone well, as I chose to mix the old and the new schools with Miles, GoGo Penguin, Bud Powell, and Mammal Hands, among others.

It’s quite fascinating to hear how the form has developed over the years.

I received quite the surprise yesterday. We threw a party for my daughter’s birthday, where my youngest step-daughter said she had a present for me as well. After the party, she presented me with a laundry basket full of LPs that belonged to my parents. She’s had them since my mom died six years ago! 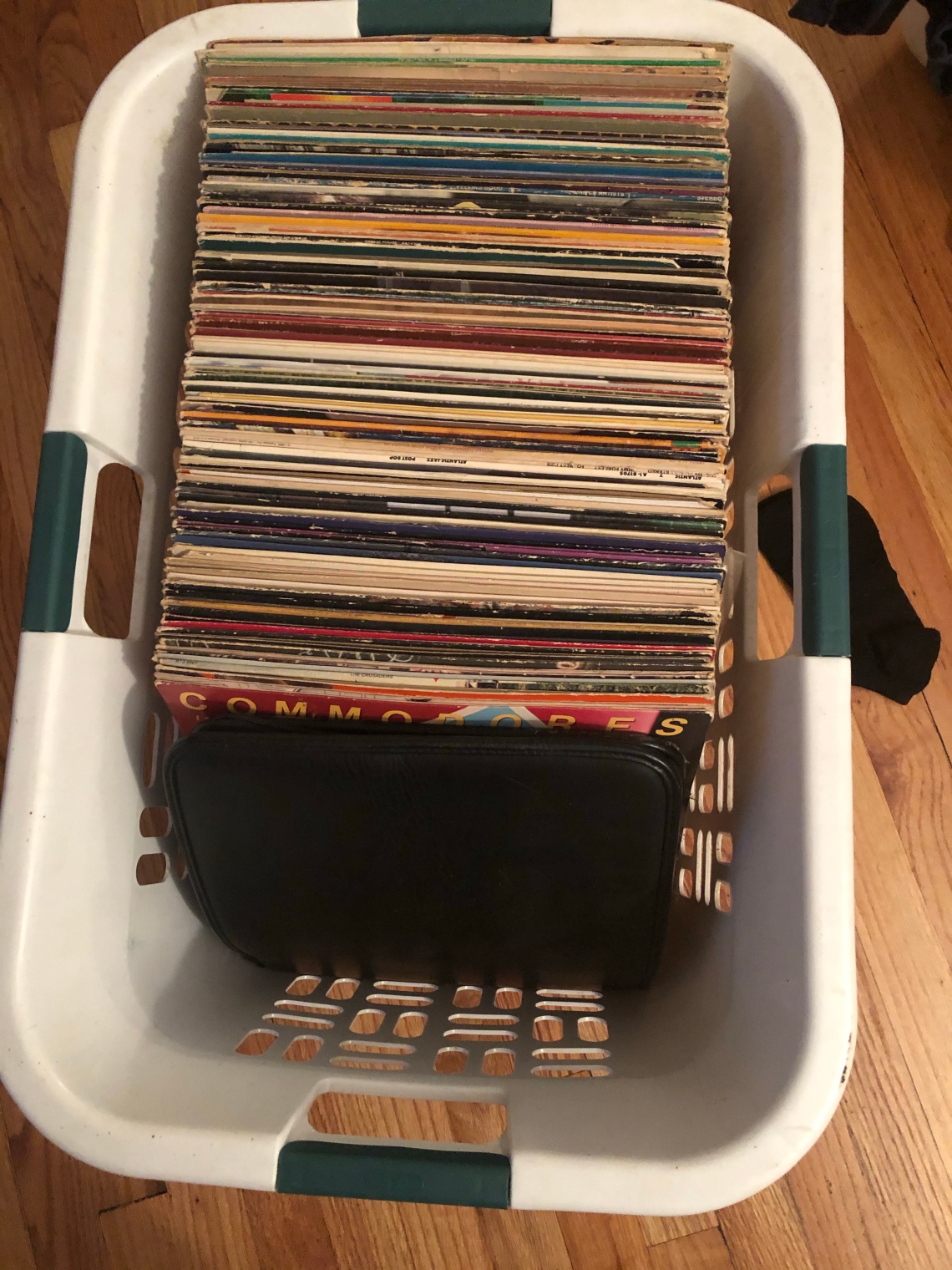 I had a lot of family help me clean out Mom’s house. The records just wandered off, and I never noticed. And now they’re back, and full of memories.

Jazz, R&B, Classical, Gospel … I can still see my parents putting these records on their turntable, usually on the weekend. Not everything in there appeals to me on a musical level, but there can be no doubting the sentimental value. At least half of the albums will wind up in my collection.

What a great find, and an unexpected surprise.