One You Missed: Adrian Belew, e

To know me is to know Adrian Belew is my musical hero. I make no bones about it. He is one of the more innovative and creative guitarists on the music scene, and has been for a good 40 years.

I came to know Adrian as the vocalist/guitarist in the 1980s version of King Crimson, who still rate as the most influential band of my life. Before long, I would realize I was already familiar with his playing, even though I wasn’t aware of it. I was hearing his guitar on records by Talking Heads and David Bowie, which had been recorded in the late ’70s. Within a couple of years, I would also hear his work with the likes of Frank Zappa, Laurie Anderson, and Paul Simon. But it was the Crimson material that appealed to me the most.

Adrian also had a string of fascinating solo albums, which he recorded and produced between stints with King Crimson and other artists. His releases got more inventive as time went along, culminating in the 2005-07 releases of Side One, Side Two, and Side Three.

For the most part, an Adrian Belew solo project is truly that: Adrian, performing and singing every part of the record himself. But he knew he would need a band in order to play his material live. At first, he was unable to find what he was looking for. Then, in 2006, he found himself in Philadelphia visiting Paul Green’s School of Rock, where he met his future rhythm section. Bassist Julie Slick, age 20, and her 18-year-old brother Eric (drums) not only handled Adrian’s complex music, but took to it with relish.

It didn’t take long for the bandleader to realize he had found what he’d been looking for. Adrian took the Slicks around the world as the Adrian Belew Power Trio. Their efforts were recorded, culminating in the release of Side Four (Live). The band was truly a force to be reckoned with. 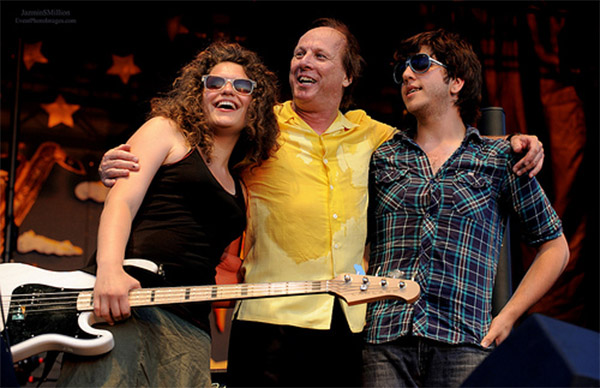 Adrian understood he had a great deal of talent on his hands, and sought to create a musical challenge for himself and them. The result was the ambitious instrumental work known as e. Adrian spoke of the project with a great deal of pride when we discussed it for my forthcoming book. “I wanted to write a piece of music that I thought would showcase the abilities of my young trio,” he told me. “I wanted to write something I knew would be super challenging for them and would show off the talents they had, and the talents of the Power Trio. As it developed, though, it turned into a much longer idea. A much deeper idea. It went from one piece of music to, ‘How about I do this more thematically?'” The end result was a five section composition spanning 43 minutes.

The music is even more exciting when you realize Adrian is also acting as his own co-guitarist. He sets up a series of loops, and then plays against them while Eric and Julie hold down the rhythm for him.

Normally, I would offer up snippets of an album’s work, talking it up as I went along. I don’t think I can do e justice that way. So instead, I think you should take the time to listen to the entire album yourself. I’ll add my thought process afterwards. Got your headphones? Good. Here we go …

Amazing, wasn’t it? It never ceases to thrill me. The thrill got even greater when I learned the band recorded the suite live in the studio. The “b3” section, probably the most complicated on the album, was recorded in a single take! I like to say a band like this has chops for days!

When I listen to e, I hear it as the soundtrack to a short film. I have absolutely NO idea whether or not Adrian sees it that way. Chances are, he was thinking of something else entirely. This is just where my addled brain goes. The short film is about a man walking up to, falling down, and re-climbing a steep hill. It’s a challenge fraught with peril, and he didn’t know he could overcome until he actually does it.

In my mental film, the “a” section is our hero stepping gingerly to the edge of hill for a peek at the view below. Without warning, the ground gives way, and he begins his rapid tumble down (“a2”). The fall knocks the wind out of him, and seriously disorients him (“a3”). Our hero realizes he cannot remain where he is, and must make his way back to the top. With no other choice, he begins his climb back to the top (“b”). Even as he undergoes this daunting challenge, our hero can’t help but admire the view around him as he climbs (“b2”).

Suddenly, there is a rockslide! Our hero loses his footing, and hangs on to the hillside by sheer will and the strength of his fingertips (“b3”). He ducks and dodges the falling debris, which eventually stops and reveals a possible path to the top. Our hero finds his footing and resumes his climb, more determined than ever (“c”).

The hill doesn’t give up without a fight, and our hero must dodge a few more obstacles on his way to the top (“d”). Even as our hero sees the end in sight, his mind plays a couple of tricks on him (“d2”) even as he tries to clear it by admiring the view once again. He’s nearly at the top again when he takes one last moment to breathe (“e”). With one final push, our hero reaches the summit. He makes his way to save ground, and relishes in his accomplishment before falling to the ground in triumph (“e2”).

Where that imagery came from, I have no idea. I only know it makes a great suite of music even better for me on a personal level.

Watching the band perform parts of the album in concert makes the experience even greater still. Just a month ago, I stood three feet from Adrian as he, Julie, and Tobias Ralph (who replaced Eric on drums) tore into a piece I’ve heard a hundred times, yet continues to leave my jaw slack with awe and wonder. This version features the original trio, in keeping with the timeline I’ve established. Just imagine: it’s strong here, and has only gotten stronger.

If Adrian Belew never wrote another note of music, e would’ve been one helluva way to go out. But the Power Trio re-ignited him as a composer, and we are now being treated to a bevy of new songs being released as part of his Flux series. It’s music that’s never the same twice!

But that’s another story.