Living Colour is, to my mind, the most criminally underrated band in music. They came on the scene like a tidal wave, and disappeared from the mainstream just as quickly. People went to sleep on this band. They really shouldn’t have.

The Brooklyn-based quartet broke on to the scene as “The Black Rock Band.” In 1988, this was a Thing. Four African-American gentlemen playing hard rock music was not something one saw every day, considering how segregated popular music had become in that decade. I suppose they could have been viewed as a gimmick. But if you listened to their music, it took about ten seconds to realize Living Colour was no gimmick band. They were also more than the sum of their parts. It wasn’t just Corey Glover’s soulful, earnest, banshee-like wailing, or Vernon Reid’s incendiary guitar pyrotechnics (which are usually the first things people point to when the band is mentioned). This band genuinely had and has something to say. All you had to do was pay attention.

Living Colour broke on to the scene with a song called “Cult of Personality.” Like so many others, I was initially caught up in the band’s look, followed closely by Reid’s guitar work. In  time, I actually started paying attention to what they band was saying. And it was heavy.

The hard rock of the late ’80s veered toward glam, women, parties and good times. I suppose that’s a big reason why Living Colour didn’t flourish the same way many of the “hair metal” bands of the same period did. The band had a message, and didn’t feel the need to talk down to its audience. (If you’re waiting for me to use the “R” word, I’m going to refrain. It’s possible Living Color’s ethnicity came in to play in some ways. But honestly, I don’t think the market was willing to bear music with a message over party anthems. Party tunes and stripper anthems sold better.) “Cult of Personality” was just the beginning. On the same album, called Vivid, the band looked at life in the ghetto from the inside, out. It’s not an angle the average rock fan was familiar, or comfortable, with.

The more I listened to this album the deeper it got. I grew up in the suburbs, so I wasn’t able to instantly relate to everything Living Colour was talking about. But over time, and with more life experience, I began to understand and relate. The tune that closes Vivid, “Which Way to America,” resonates even more deeply now than it did then.

Living Colour upped the ante with its second album, Time’s Up, in 1990. This band was “woke” long before it became a hashtag, and this album (which some joked should have been called Livid) made that case. Song for song, it is my favorite album. The song “Pride” contains one of my favorite lyrics of all time. It’s something I’ve asked of more than person to do in my lifetime: “Relate to me as me/Not what you see on t.v.”

My favorite song on the album is “Type.” It’s the bigger, meaner cousin of “Cult of Personality.” The band had truly found its groove on this album. Their message wasn’t getting any quieter. If it’s possible to be subtle by way of blunt-force trauma, that’s what Living Colour was doing.

Bassist Muzz Skillings left the band after Time’s Up. And while this was certainly unfortunate, it paved the way for the introduction of Doug Wimbish, an incredibly expressive and innovative player in his own right. Like Reid, Wimbish has the ability to not only think, but live outside the musical box. This came in handy as the band moved forward.

Things took a decidedly darker turn with Stain, which came out in ’93. I doubt it was their intention, but the band sounds like its telling the music industry (and a good chunk of the rest of the world) what it could do with itself. Social consciousness was being replaced with rage. But the point was getting across all the same.

I’m not sure what inspired “This Little Pig,” but the song never fails to hit me on multiple levels. I like this version, because it sounds like it could fly apart at any second. But the band walks the musical tightrope deftly, eliciting gasps of excitement and terror along the way.

Alas, the dreaded “creative differences” arose, and the band broke up. Reid released a string of fascinating solo albums over the next few years (more about that on another day). Lucky for all of us, Living Colour came back, in a big way, with Collideoscope, in 2003. The break seemed to have done the band good. They sounded fresh, energized, and ready to take on the world again. And if it was possible for a remarkably mature band to sound even more so, they did.

The War on Terror opened up a new vein of songcraft for Living Colour, who still live in New York. I heard songs from nearly every angle after that fateful day. But none of them reached me like “Flying,” one of the most beautiful and touching 9/11 songs most of you never heard.

And just in case you thought the band had pushed the social consciousness songs aside, along came this one, just to remind you that wasn’t the case at all. The struggle was real, and it applied to many types of people.

Six years later, Living Colour released The Chair in the Doorway. This album feels like a transition. The band is turning yet another corner, and the final destination has not yet been determined. No matter. Regardless of where these guys go, I’m coming along for the ride.

In 2014, I finally got to experience Living Colour live. I stood less than six feet from Vernon Reid as the band tore into an incredible two-hour set. They were loud as hell, and as relevant as ever. They were even kind enough to take photos with fans after the show, including this guy. I have to give Reid props for successfully photo-bombing his own band.

The band was promoting its forthcoming album, Shade. Alas, that record has not yet seen the light of day. Like many other fans, I eagerly await this album, and another chance to hear what this band has to say. On the plus side, Vernon graciously gave me a bit of his time, and became the first interview for my forthcoming book. His words helped shape the chapter I call “‘Black’ Music.” This will make a lot more sense after you read it. I’ll never be able to thank him enough for helping me prove the point I was trying to make all along. 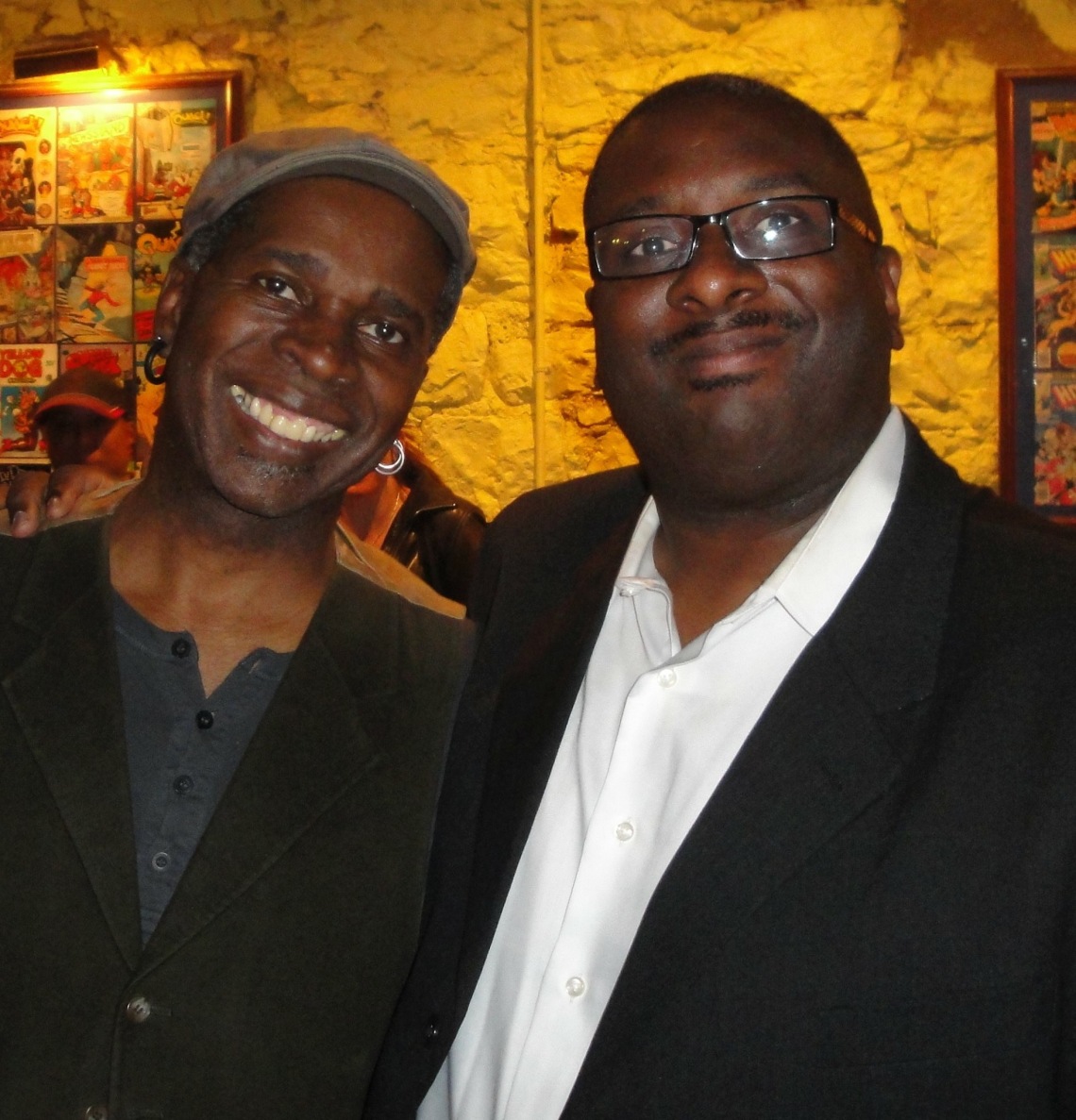 In the meantime, Living Colour issued an EP featuring a cover of the Notorious B.I.G.’s “Who Shot Ya?” It is a stunning bit of social commentary. Not only has the band not backed off its message, they have doubled down. I can’t help but respect them for that.

Living Colour was and is one of the most important and influential bands in my collection. It’s not hard to understand why.

All you have to do is listen.